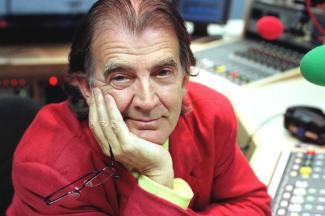 Anderson, Gerry (1944–2014), musician, radio broadcaster and television presenter, was born Gerald Michael Anderson on 28 October 1944 in Derry, one of four children (three sons and a daughter) of John Anderson, a boiler and range-fireplace fitter who had joined the anti-treaty side during the Irish civil war (1922–3), and his wife Kate (née McLaughlin) from Shandrum, a small farm near Buncrana, Co. Donegal. When she was sixteen, Kate left for the hiring fairs of Derry city and found work, first with a wealthy farmer, then in one of the shirt factories of Derry.

The family was catholic, but not overly devout, and Gerry inherited a sense of irreverence from his mother and this came out in his writing. In one probably apocryphal story he wrote of her whispering into his ear ‘look at those fools’ as they walked by men kneeling to kiss the ring of the bishop of Derry (Stroke City, 84). Throughout Anderson’s memoirs there is a tremendous sense of how he was shaped by his family and the city of his birth. The family home on Sackville Street was in the heart of Derry, near the docklands and a large American naval base. Thus, from a young age he was exposed to music, goods and people from all over the world. After the birth of her first baby, Kate gave up working and took in lodgers, ranging from factory girls to a Royal Navy petty officer. This meant that the house was ‘always alive and full of craic. There were people from all over and the kitchen was always busy. It was an education for the kids and there was always love, entertainment and fun’ (David Anderson, December 2021).

Gerry’s two older brothers attended the local grammar school and it was intended that he would too, having excelled in his eleven-plus exams. However, both brothers had unfortunate experiences there and, without his parents’ knowledge, Gerry enrolled with the Christian Brothers and presented it to them as a fait accompli. After he left school he briefly served as an apprentice toolmaker and was sacked for his ‘bad attitude’ before taking a job as a clerk at the docks where, he claimed, the dockers regularly tried to kill him because he miscalculated their wages. Not surprisingly, he was sacked from there too. He then ‘retired in a huff to [my] bedroom carrying a guitar and emerged three years later as a rock and roll guitar player’ (Independent, 24 Aug. 2014). In truth Anderson had been entranced by music from his earliest years when his mother had brought him to her family home, a place always filled with songs, music and storytellers, where he could sit and listen to the flow of conversation and laughter. His son David recalled that Shandrum was Anderson’s spiritual home and, if pressed, he would have said he was a Donegal man living in Derry. His brother Johnny was also a pivotal influence: when he was fourteen, Johnny, who played jazz trombone, began regularly bringing musicians or ‘heads’ home to their kitchen to smoke, drink tea and talk music. The combination of Old Spice aftershave, jazz and slang all made Anderson determined that he, too, should become a ‘head’. Separately, he discovered the delights of rock and roll on the jukebox of a local chip shop where the opening chords of ‘Shakin’ all over’ by Johnny Kidd and the Pirates jolted him ‘with the force of a direct hit of lightning’ (Stroke City, 114). As a result, he talked his parents into buying him a cheap acoustic guitar which he taught himself to play.

He played guitar with various bands, but the early years were lean as he subsisted on a diet of milk and Mars bars while waiting for news of the next gig. Between 1963 and 1966 he gigged throughout Ireland and Britain and moved to Dublin. By 1969 he was playing with the Chessmen, having replaced the departed Robert Ballagh, who became a well-known artist. When the band broke up in September 1971 Anderson joined Brown and O’Brien, whose name ‘recalled a solicitor’s firm in Sligo rather than a functioning musical outfit’ (Heads, 7). Touring Canada the following year, Brown and O’Brien broke up and Anderson, by then an accomplished guitarist, was invited to join rockabilly musician Ronnie Hawkins’ influential band, the Hawks. Anderson toured North America with the Hawks and lived a hectic rock and roll lifestyle. Worn out by life on the road, he returned home to Derry newly married to Christine (née Stewart), who had joined him in Canada. He reunited with his friends Colum Arbuckle and Jimmy Whiteside, and for the next ten years they continued to gig as Toe Jam, a heavy rock trio that was on occasion supported by the Undertones and the fledgling U2.

On his return to Ireland, Anderson took a B.Sc. degree in sociology and social anthropology at the University of Ulster, and then a postgraduate diploma in continuing education. He graduated in 1978 and for the next six years worked first as a teacher and then as an assistant social worker in Strabane, Co. Tyrone. At the age of forty, he appeared set for a conventional career but a chance radio interview changed everything. In his capacity as editor of Community Mirror, a small cross-community magazine in Derry, he was invited onto Radio Foyle to discuss his role. Once on air he discovered he had a talent for live broadcasting or, as he put it: ‘I could lie convincingly without apparent effort, fluently and live. It was easy’ (Stroke City, 7). He was invited to present a regular show on Radio Foyle, which proved so popular it was picked up by BBC Radio Ulster for broadcast throughout the province. Anderson’s easy on-air style and irreverent stream-of-consciousness monologues reflected the humour of the city he called ‘Stroke City’, affectionately mocking the contested nature of the city’s name – ‘Derry-stroke-Londonderry’.

From 1985 Anderson became a household name in Ulster broadcasting, hosting radio and television programmes for BBC Northern Ireland, BBC Radio Ulster, BBC Radio Foyle and BBC Radio 4. The Gerry Anderson show, broadcast on Radio Ulster weekday mornings, was a mixture of music and talk with his co-presenter and sidekick Seán Coyle. Anderson never followed a running order or appeared in the studio more than two minutes before the programme started; he was even sometimes late for his own show. In later years Mickey Bradley (base player with the Undertones) produced the show and was regularly reduced to laughter while Anderson (often calling himself ‘Turkey Neck’, ‘Puppet Chin’ or ‘Golf Mike Alpha’) and Coyle bantered in a free-wheeling, often surreal fashion. On one occasion Anderson interviewed singer Daniel O’Donnell as Coyle imitated O’Donnell, with both answering questions to the confusion and amusement of their audience. Indeed, so anarchic and funny were the pair’s antics that from 2006 they formed the basis for BBC Northern Ireland’s animated television comedy series On the air, which featured regulars such as Geordie Tuft, a farmer from Loughbrickland, who offered advice on farm animals in general and goats in particular.

Anderson was also a trenchant commentator on the more serious aspects of living in Northern Ireland, particularly on the corrosive effects of political and religious extremism. His honesty and incisiveness were not always welcomed in a deeply polarised society and he received his fair share of abuse and threats. However, many listeners saw him as a much-needed voice of wry sanity and welcomed his even-handed ridiculing of self-righteousness and tribalism. His popularity brought numerous awards, including the Gold Sony Award for best regional broadcaster in 1990 and Broadcaster of the Year at the Entertainment and Media awards (1991–3).

In February 1994 Anderson moved to BBC Radio 4 to present an hour-long afternoon programme entitled Anderson country. This gave him a wider audience in Britain but his ad-libbed humour, grounded in Northern Irish fatalism and sardonic wit, often failed to translate. Although his audience grew by 20,000 in the first three months, he also generated a flood of complaints – 1,500 by August, and a further 16,000 by the following January. While some in BBC management considered Anderson’s show the breath of fresh air the rather staid station required, much of its Home Counties’ audience remained unconvinced and, by mutual consent, Anderson left Radio 4 and returned to Radio Ulster the following year.

In addition to his radio shows, Anderson presented several television shows for BBC Northern Ireland, such as Anderson live, Anderson on the box and the Joker club. He also made several documentaries, including Gerry Anderson’s wild west show, where he indulged his love of American frontier history. He contributed a regular column to the Belfast Telegraph, notable for its humorous, off-the-cuff style. His final documentary, A city dreaming, which he wrote and narrated, premiered in December 2013 and was his love-letter to ‘Stroke City’, incorporating film footage and still photography voiced over with his own recollections. His two memoirs, Surviving Stroke City (1999) and Heads: a day in the life (2008) were well received, and in 2004 he was named Best Regional Presenter at the Royal Television Society awards. In 2005 he became the first broadcaster from Northern Ireland to be inducted into the UK Radio Academy Hall of Fame.

By 2012 Anderson was seriously ill and announced he was stepping back from his broadcasting commitments. He died in Belfast on 21 August 2014, survived by his wife Christine, three children and four grandchildren. His funeral mass at St Eugene’s Cathedral, Derry, was attended by more than 1,000 people, including former SDLP leader John Hume and UUP leader Mike Nesbitt. He is buried in the part of the city cemetery that overlooks the Brandywell (home of Derry City FC) where he was a regular visitor over the decades. Numerous tributes to his intelligence, humour and honesty were paid to him by leading figures in broadcasting and public life, including a joint statement by Peter Robinson and Martin McGuinness, the first and deputy first ministers of Northern Ireland. In recognition of his near thirty-year career, BBC Northern Ireland broadcast a series of programmes on radio and television celebrating his life. In 2015 he was inducted into the PPI (Phonographic Performance Ireland) Hall of Fame. Anderson himself would probably have been sardonic about these various tributes. His book, Surviving Stroke City opens with Anderson’s Law: ‘sustaining a successful career in showbusiness depends on one’s ability to master the art of looking surprised and shocked on being told something that one has already known for some time’.