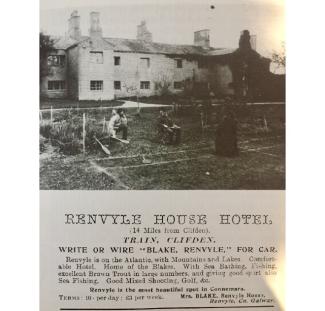 Blake, Caroline (1835–1919), landlord and hotelier, was born Caroline Johanna Burke in 1835 in Co. Tyrone, to Henry A. Burke, a protestant clergyman, and Julia Burke (née Blake) of Co. Mayo. Little is known of her childhood, although she regularly spent holidays at Renvyle House in Connemara, Co. Galway, with her uncle, the landlord Henry Blake, his wife Martha and their nine children.

In 1861, aged twenty-six, Blake married Henry’s eldest son, Edgar Blake, at Magheracross, Co. Fermanagh. Edgar, her first cousin, was twenty years her senior and had inherited the Renvyle estate on the death of his parents in the previous decade. The pair lived in Renvyle House and would go on to have three children. The eldest, Henry (‘Valentine’) was born in 1864 and baptised in Dublin. He was followed by another son, Robert, and finally a daughter, Julia, c. 1867.

Edgar was often absent on business, having been appointed as agent for transport at the port of Dublin in 1862 and Blake, despite her youth, undertook much of the responsibility of the running of the almost 5,000-acre Renvyle estate. Edgar died on 25 November 1872 at Pembroke Road, Dublin, aged fifty-seven. Renvyle House and estate were left to his wife as trustee for their son Valentine who, although the eldest boy in their family, was just eight years of age on the death of his father.

Blake, then aged thirty-seven, thus became the figurehead of an estate of 4,682 acres which was home to over 4,500 tenants and accrued an annual rent of approximately £1,600. The Renvyle estate was situated in one of the poorest parts of the country and most tenants had small and largely inarable patches of land, causing them to regularly suffer poor harvests and starvation, including in 1861 and 1863. Despite this, there was little in the way of agrarian tension throughout the 1860s and early 1870s, although Blake regularly summoned tenants to local petty sessions courts for infractions such as the taking of seaweed or trespassing of animals.

Blake believed that the initial years of her stewardship of the estate were marked by good relations with her tenants. The particularly severe famine of 1879, which followed two years of poor weather and bad harvests, hit the area hard, however. Several relief committees were set up nationally to distribute aid to affected areas, including Renvyle, where starvation and fever were said to be rampant. Blake stated publicly that she did not believe the potato crop was as bad as stated in 1879, and that the cries of famine in that year were politically motivated. Other sources, however, indicate that deaths were ten per cent higher in 1879 than the previous year.

A branch of the Land League had been founded in Renvyle by 1880, and many locals were refusing to work for Blake. Consequently, she was forced to hire workmen from the north of Ireland to cut her meadows and plant crops. Locals were apparently instructed by members of the League not to pay their rent until a reduction could be secured. Meanwhile agrarian outrages were committed against graziers on the Blake estate; cows were cut open and thrown off cliffs, haystacks burned, herds and graziers threatened, sheep stolen and animals chased onto the Blakes’s grazing farms.

Blake’s response was to evict 109 men, women and children from the village of Tully in September 1881. By this time she was under constant police protection and often carried a pistol when she left her home. Blake later claimed that there were discussions at a League meeting in Tullycross Church of hiring someone to kill her for the sum of £5.

The land acts of 1881 and 1882, and the imprisonment of local League ringleaders, brought an improvement in the situation in Renvyle in the early 1880s. The Land Court gradually enforced rent decreases on the Renvyle estate, however, and by 1883 Blake found herself in financial difficulty. At this point she opened Renvyle House as a hotel, an unusual move that evoked some commentary in the press: ‘our sympathies are naturally enlisted when we see a lady of rank having to enter upon a life of commercial activity’ (Dublin Daily Express, 8 July 1884).

The hotel attracted many luminaries of the day, including artists Sophie Pemberton and Ernest Waterlow, and poet and folklorist William Larminie (qv). Edith Somerville and Violet Florence Martin (‘Martin Ross’) (qv), who visited the hotel in the early 1890s, described Blake as having a ‘refined, intellectual face and delicate physique’. They added that they found it difficult to imagine her ‘going out day after day to drive off her land the trespassing cattle, sheep, and horses that were as regularly driven on to it again as soon as her back was turned’ (Somerville and Ross, 144). Sarah Byles offered an alternative viewpoint, describing the management of the Renvyle estate as ‘one of the most striking instances of landlordism in the world,’ where the people, ‘pious, peaceful and industrious, lived hunted, weary lives like frightened animals’ (Ipswich Journal, 13 Dec. 1890).

Blake continued to speak out against the Land League, and also criticised the government for the lack of help they offered her. She was a prolific letter writer and was a witness at the Parnell Commission of 1888–9, offering her experience as a landlord who had been a victim of agrarian crime. Her testimony attracted widespread attention as she excoriated the League, who she believed ‘must have been hard up to come to the fringes of Connemara to attack a woman’ (Ipswich Journal, 29 Nov. 1890).

An avowed unionist, Blake attended meetings of the Unionist Women’s Alliance. She also regularly criticised land acts and rates policies of successive British governments, which she believed made life difficult for landlords. By 1895, despite her income from the hotel, Blake faced bankruptcy and implored unionists to donate money to a specially established fund to allow her to hold on to her estate, which she stated had become encumbered due to her being ‘obnoxious to the Land League’ (Evening Herald, 22 June 1893). Publicised in the English press, the fund raised £1,300, with soon-to-be prime minister A. J. Balfour among the high-profile donors. This was enough to allow Blake to keep hold of Renvyle House, commonage at Letter Hill and a fertile grazing farm at Curragh. The rest of her properties were gradually purchased by tenants.

Sporadic agrarian tensions continued in Renvyle over the next two decades, with many of the locals unhappy that the 400-acre grazing farm at Curragh remained in Blake’s hands, often rented out to wealthy graziers. In 1913, the United Irish League was re-established in the parish and a prolonged campaign against Blake was inaugurated. The tactics of the campaign included mass rallies, cattle drives and the chasing of animals onto the property. Eight local men were imprisoned for several weeks following one cattle drive and police protection was once again given to the Blakes.

Valentine, Blake’s eldest son, died in 1910, having spent most of his life working as a doctor in Dublin. Her second son, Robert, lived in Rhodesia (modern day Zimbabwe), leaving Blake, her daughter Julia and Valentine’s widow, Bessie, at Renvyle House. By 1915, grazing farms from all landlords in west Connemara, except Blake’s, were vested in the Congested Districts Board. Blake continued to resist surrendering her land, issuing summonses against local people deemed to have transgressed in some way. At one point, her daughter Julia even discharged a shotgun at a local man trespassing on the grazing farm.

Finally in March 1916, after sustained and increasing pressure, Caroline, then in her eighties, bowed to the inevitable and vested her maps with the Congested Districts Board. Within two years, Curragh Farm had been divided up amongst tenants and Renvyle House was sold to poet Oliver St John Gogarty (qv) and his wife Martha. Julia and Bessie departed for England, leaving Caroline at Tullymore Cottage in Renvyle, where she remained for the rest of her life, cared for by Stephen and Annie Wallace.

Though clashes over land had dominated much of her relationship with Renvyle, Caroline Blake also worked for the good of the locality in many ways. As manager of Eagle’s Nest national school she regularly wrote to the Board of Education seeking better facilities for the pupils. She sponsored a prize for teachers in the area in the 1890s and also helped to secure donations for the construction of a pier at Tully. Blake also displayed interest in the history of her adopted area and published several articles on the subject, including a history of Renvyle in the May 1895 issue of To-day’s Women.

Caroline Blake died on 23 February 1919, aged eighty-four. She had outlived her husband by almost half a century. Interred locally at a sparsely attended funeral, her death garnered scant attention other than a three-line obituary in several newspapers.