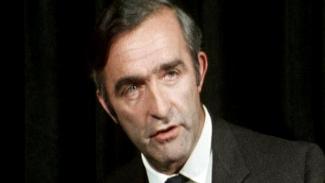 Boal, Desmond Norman Orr (1928–2015), lawyer and politician, was born on 8 August 1928 in St Columb’s Court, Derry city, the third of five children (and only son) of James Boal, cashier and bakery manager, and his wife Kathleen (nèe Walker). Brought up in the Church of Ireland, he was educated at First Derry Primary School, Cathedral Primary School (Derry), Foyle College (Derry), Portora School (Enniskillen) and Trinity College Dublin (TCD), where he graduated BA and Bachelor of Laws (LLB). During his studies Boal founded an Orange lodge in TCD. He was called to the bar in Hilary term 1952 at the Inner Temple, London. Boal travelled extensively during his summers, visiting Afghanistan, South America and even China during the Cultural Revolution.

Around 1956 Boal made the acquaintance of Ian Paisley (qv) through friendships with ultra-protestant activists, and for the next half-century would be one of Paisley’s closest friends and advisers. In some respects, they were unlikely soulmates. Boal had meditated at a Buddhist monastery in Thailand, maintained an interest in Buddhism and strongly opposed the death penalty. Although detesting alcohol and tobacco, he was a habitual gambler and poker player who dismissed moralist opposition as ‘childish prejudices’ and regularly attended horse races in the Republic. In November 1966 Boal was co-respondent in a divorce case (and later accused Gerry Fitt (qv) of making subliminal references to this in a Stormont debate). Observers thought Paisley admired Boal’s sheer intellectual firepower and was susceptible to his personal charm and general approachability; above all they shared resentment against political and other establishments. They inherited a longstanding independent unionist tradition combining ultra-protestantism with socio-economic populism and are sometimes compared to Lindsay Crawford (qv) and T. H. Sloan (qv).

In January 1960 Boal became Ulster Unionist Party (UUP) Stormont MP for Shankill in a by-election, defeating a Northern Ireland Labour Party (NILP) candidate. In June 1961 he joined NILP MPs in a motion criticising the government over unemployment; he delivered a biting speech and abstained in the vote. He was one of the few MPs whose speeches filled the chamber; his merciless attacks on successive governments were contrasted with the NILP MPs’ self-conscious respectability. In November 1961 he had the unionist whip withdrawn, but was unopposed at the 1962 Stormont general election. His public criticisms of Brooke contributed to the premier’s resignation in March 1963.

He regained the whip after Terence O’Neill (qv) replaced Brooke but became his most outspoken parliamentary critic. At the 1965 Stormont general election he held Shankill and recruited John McQuade (qv) as unionist candidate for the neighbouring Woodvale seat. McQuade defeated the NILP MP and became Boal’s parliamentary collaborator, although he was considerably less sophisticated and more bigoted. Boal denounced the 1965 meeting between O’Neill and Seán Lemass (qv) because MPs had not been notified in advance. On 16 December 1965 he was appointed counsel to the attorney general, with no formal salary but an income of about £2,000 a year from official briefs. The nationalist MP Harry Diamond (qv) complained that Boal was simultaneously legal adviser to the government and Paisley. Boal was dismissed on 17 June 1966 after opposing a government motion denouncing a Paisleyite demonstration. He insisted that people were entitled to insult the queen’s representative and the presbyterian church, provided they obeyed the law.

In September 1966 Boal organised an abortive attempt to depose O’Neill and grew increasingly discontented with structural obstacles to rank-and-file discontent within the UUP. He also thought the Orange Order should be purely religious and was damaged by association with the party. He was the only unionist MP to defy the party whip by voting to locate the New University of Ulster in Derry. As civil disorder mounted in 1968–9, he denounced the British Labour government’s threat to intervene unless Stormont introduced reforms. While expressing contempt for the civil rights movement, he also dissociated himself from Paisleyite counter-demonstrations. At the February 1969 Stormont general election, he was re-elected for Shankill despite an O’Neillite challenge.

During the riots in Belfast in August 1969, he helped establish a local representative structure on the Shankill which provided a framework for subsequent paramilitarism. Claiming that neglectful and maladroit policing was driving Shankill residents to vigilantism, he tried to restrain the paramilitaries, while maintaining that the intervention of troops from Britain was unnecessary and fatally undermined Stormont. He now advocated political integration of Northern Ireland into the UK and persuaded Paisley to do likewise. After Paisley was elected to Stormont in April 1970, Boal coached him in parliamentary procedure and tried to convince journalists and governmental figures that if Paisley became the leader of unionism he could deliver a settlement.

Boal was highly critical of the failure of the security forces to impose their authority on the Falls Road district, and on 1 July 1970 accused the army of failing to intervene while republicans were openly firing from the catholic side of the Crumlin Road during riots. At this time he was himself interrogated at gunpoint by republicans at Flax Street in north Belfast. Opposing internment as contrary to natural justice, he persuaded Paisley to follow suit and was again deprived of the unionist whip in March 1970, shortly afterwards declaring he would not resume it if offered.

On 13 September 1971 Boal formally resigned from the UUP. On 29 September Paisley announced the founding of a new party to a crowd angered by the bombing of a loyalist pub on the Shankill Road. Boal travelled extensively to organise the new grouping, which was largely an extension of Paisley’s Protestant Unionist Party. Boal became chairman and named it the Democratic Unionist Party (DUP), advocating a mass-membership organisation without the UUP’s restrictions on rank-and-file influence. He maintained, apparently sincerely, that by combining left-wing socio-economic policies with right-wing views on the constitution and law and order, the DUP might even attract catholic support. He was the party’s only office-holder in its first decade who did not belong to Paisley’s Free Presbyterian Church.

In 1971 Boal successfully defended the loyalist paramilitary John McKeague (qv) on a charge of incitement to hatred. When Stormont was suspended in March 1972 Boal resigned his seat and increasingly concentrated on his legal career. Acquiring a Georgian country house on St John’s Point (near Killough, Co. Down), he lived there for most of the 1970s and into the 1980s, and later moved to Holywood, in the prosperous middle-class ‘Gold Coast’ of North Down; he also built a holiday cottage in Co. Donegal. In January 1973 he became a QC and on 8 October 1973 resigned as DUP chairman. He rapidly confirmed his reputation as the most talented Northern Ireland barrister, renowned for his ability to address the court at length without notes on matters of law and fact, his uncompromising willingness to challenge judges, and ruthlessly logical cross-examinations, impelling witnesses into gradual self-destruction – provoked comparisons with Edward Carson (qv). He was also an expert on planning law.

During major law cases Boal resided at the Europa Hotel in central Belfast, perplexing management by occasionally inviting homeless people to dine with him in the restaurant. He often gave confidential assistance to colleagues fallen on hard times and represented indigent clients without payment. Many bar colleagues regarded him as friend and mentor; he worked with figures as different as the civil rights activist Kevin Boyle (qv), the hardline unionist Jim Allister and the prominent catholic/nationalist solicitor P. J. McGrory (qv). When McGrory sued a British newspaper for suggesting his legal representation of families of IRA members killed by the Special Armed Services (SAS) in Gibraltar in 1988 colluded with the IRA, Boal testified on McGrory’s behalf. McGrory’s son Barra, the first Northern Ireland director of public prosecutions from a catholic/nationalist background, called Boal a personal hero not only for his legal skills but for his kindness and respect.

Boal retained personal friendships with the Paisley family, who nicknamed him ‘Pig’. His role as ‘eminence grise/orange’ provoked speculation: some commentators believed his consciousness of his own abilities produced a self-image as man of destiny who might orchestrate a lasting constitutional settlement. On 6 January 1974 Boal called for a federal Ireland with a Belfast six-county parliament under Dublin sovereignty; he declared the union irretrievably broken by British treachery and Faulknerite incompetence. This was denounced by leading unionists, including Paisley. On 17 January 1974 Boal held semi-public discussions with Frank McManus, the nationalist MP for Fermanagh–South Tyrone, and the republican intellectual Desmond Fennell (1929–2021), to explore how Boal’s proposals might be reconciled with the ‘Éire Nua’ four-province federation advocated by Provisional Sinn Féin. The proposals attracted sympathy from loyalist and republican paramilitary organisations and elements within Fianna Fáil. The Irish Times initially welcomed the proposal as suggesting hardline unionists were preparing to accept the power-sharing Sunningdale agreement of December 1973. However, nationalist critics complained the Boal scheme would revive the discriminatory Stormont regime, while others (including Conor Cruise O’Brien (qv)) denounced it as an alliance between opposing extremists to undermine Sunningdale and precipitate civil war. After the fall of the Executive in May 1974, Boal commented that it was the attempt to impose Sunningdale on unionists that risked civil war.

The DUP unsuccessfully proposed Boal as chairman of the 1975 Constitutional Convention. During the convention, Gerry Fitt privately complained Boal was using parties at his house to cultivate support for his constitutional initiatives. In 1976–7 Boal co-operated with Seán MacBride (qv) as joint mediator in confidential negotiations between the Provisional IRA and the Ulster Volunteer Force (UVF) about a federal settlement; these petered out after they were publicised by Independent Television News. Boal opposed the 1985 Anglo–Irish agreement and briefly advocated an independent Northern Ireland.

The ‘supergrass’ trials of 1980–86 provided the highpoint of his legal career. He was retained by both republicans and loyalists charged on the basis of informer testimony, and his cross-examination skills played a major role in discrediting the supergrasses. Never restrained by deference to authority, he accused Royal Ulster Constabulary (RUC) Chief Constable John Hermon (qv) of virtual contempt of court by favourable reference to a supergrass; he repeatedly pressed allegations of police misconduct and collusion to protect informers. On 13 January 1987 Boal was admitted to the Irish bar to act as defence counsel for DUP deputy leader Peter Robinson, tried before the Special Criminal Court for riotous protest against the Anglo–Irish agreement at Clontibret, Co. Monaghan. Becoming a senior counsel on 6 February 1987, he retired from the bar in 1997 but continued to engage in consultancy work. According to obituarists, he was divorced at least once (before 1987) and had two sons and a daughter. His wife June, with whom he had a son and a daughter, died on 3 May 1995, and at his death he was married to Annette. He was a member of Helen’s Bay Royal Arch Purple and of Helen’s Bay Masonic Lodge, and honorary secretary of the Bangor unit of the Sea Cadet Corps.

While his interest in federalism diminished after the 1970s, the federalist Boal scheme of January 1974 was again put forward by liberal protestants such as John Robb (1932–2018) as late as 2007. His friendship with Paisley finally broke when the DUP agreed to enter government with Sinn Féin in 2007; he told Paisley (who took the breach very hard) that he had betrayed everything he ever advocated. Boal died on 23 April 2015 at his home in Holywood, Co. Down; his funeral was held at Roselawn crematorium in Belfast.

Boal remains enigmatic. His career bears a variety of interpretations: how far was he a generous advocate seeking, bravely if erratically, a Northern Ireland based on the rule of law and administration open to talent and freed from special interests, or an irresponsible mischief-maker too conscious of his own cleverness for his own, and other people’s, good?