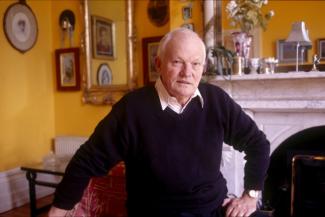 Burrowes, Wesley (1930–2015), writer, was born in Bangor, Co. Down, on 26 April 1930, one of four children (two boys and two girls) of Harry Burrowes, a first world war veteran and civil servant attached to the Northern Ireland education department, and his wife Carrie Burrowes (née Irwin). He attended school at the Royal Belfast Academical Institution, and then studied modern languages (French and German) at Queen’s University, Belfast (QUB), where he edited the college literary journal, Q, publishing several early poems of Philip Larkin, then the university’s assistant librarian. After graduation in 1952, Burrowes worked at the Commercial Insurance Company in Belfast before being transferred to its Dublin office in 1955. He began working at Córas Tráchtála, the Irish export board, as an advisor on the furniture trade in 1959, and also married actress Liz Brennan that year. The couple had a daughter in 1962 and divorced in 1967.

Burrowes began writing comedy sketches for revue shows in the late 1950s, which were performed by popular actors of the day including Des Keogh, David Kelly (qv), Cecil Sheridan (qv) and Rosaleen Linehan. His first play ‘The crooked house’ was performed in the Eblana theatre at Busáras in 1960. He then co-wrote a musical, ‘Carrie’, with Michael Coffey and James Douglas, which premiered at the Olympia Theatre as part of the Dublin Theatre Festival in September 1963. The production starred Milo O’Shea (qv), Ray McAnally (qv) and David Kelly, with music by Jim Doherty. The success of ‘Carrie’ allowed Burrowes to become a full-time writer. In 1969 he married Helena Ruuth, a Swedish textile designer with Kilkenny Design, and they had a son in 1970. That year they moved to Avoca, Co. Wicklow, but would later settle in Bray.

In 1969 his absurdist play ‘The Becauseway’ won the Irish Life drama competition, premiering at the Peacock shortly thereafter, and was produced for television by RTÉ in 1971. He won the Irish Life award again in 1970 for ‘And all the people rejoiced’, which was revised and retitled ‘A loud bang on June the first’ and performed at the Abbey Theatre in February 1971. He adapted James Joyce’s (qv) only extant play, ‘Exiles’, for RTÉ television in 1974, while his own hour-long television play ‘Silver apples of the moon’ was broadcast in January 1979. His theatre career concluded with the comedy ‘Affluence’ in August 1980.

Burrowes had begun scriptwriting for television in 1964 when he took over writing on RTÉ’s urban serial Tolka Row (1964–8) from its creator Maura Laverty (qv). In 1966 he became chief scriptwriter on RTÉ’s long-running, rural drama series, The Riordans (1965–79), for which he produced some 300 scripts. At the beginning of his tenure Burrowes moved to rural Kilkenny where the series was set (though it was shot in Meath) to immerse himself in the local culture and devise storylines and authentic dialogue. By his own admission ‘A great many of the stories in The Riordans were stolen from conservations in Shirley’s’, a pub near his then-home in Kells, Co. Kilkenny (The Riordans: tea, taboos and tractors, 2009). When Louis Lentin (qv) became head of RTÉ’s drama department in 1978 he made the unpopular decision to axe the series, which concluded its fourteen-year run the following year. Lentin then commissioned Burrowes’s spin-off series, Bracken, which followed the exploits of Riordans character Pat Barry, moving the action from Kilkenny to Wicklow. Broadcast for two seasons from 1980 to 1982, Bracken starred Gabriel Byrne and Niall Tóibín (d. 2019), and introduced the father and son characters Dinny (Joe Lynch (qv)) and Miley Byrne (Mick Lally (qv)) who would be central to Burrowes’s next venture, the weekly drama serial Glenroe (1983–2001). At the height of its popularity Glenroe, which was broadcast on Sunday evenings for twenty-four weeks of the year, attracted an enormous audience of between one and one and a half million viewers. As well as being the show’s creator, Burrowes was on the writing team for the first fifteen of its eighteen year-run.

During his thirty-plus years writing ‘soaps’ (he derided the term, preferring ‘serial drama’ or ‘chronicle drama’), Burrowes frequently walked a tightrope of what was culturally acceptable on Irish television and was a modernising force, in particular through his work on The Riordans. His handling of the class division between the propertied and unpropertied was a recurrent theme in the series, and his sympathetic treatment of characters from the Traveller community was notable, as was the inclusion of a young, liberal-minded priest. He also included storylines on the then-controversial issues of hare coursing, mixed marriages between protestants and catholics, marital breakdown and use of the contraceptive pill (on the recommendation of the aforementioned liberal parish priest to prevent pregnancy for the protection of health, which was the pill’s only legal use at the time). Burrowes’s attempts to tackle issues such as the experience of unmarried mothers or extra-marital affairs were reportedly thwarted by nervous RTÉ producers, however. Keenly aware of the hypocrisy in relation to what was considered permissible in programmes from outside Ireland, Burrowes wrote in 1977: ‘Irish viewers seem to accept fairly equably … any amount of sex and sadism, as long as it is foreign-made, while retaining the strictest of standards about what RTÉ produces.’ (Burrowes, 20)

Glenroe, which first broadcast on 11 September 1983, was less forthright in its handling of topical issues. As Helena Sheehan put it: ‘Glenroe did not do much to face up to the black spots in Irish society. It did not generate anything like the sort of controversy that The Riordans did.’ (Sheehan, 138) Burrowes himself stated that it was not his intention to make the show’s small community a microcosm of the country’s social problems, but to focus instead on character and relationships. That said, the series did occasionally take up social issues, such as the economic plight of small farmers, and it also occasionally ran afoul of the double standard which accepted racier storylines in ‘foreign’ productions but not domestic ones. In January 1994, for example, the show featured its first, and only, ‘sex scene’, which was greeted by outraged complaints to RTÉ, as well as a significant spike in viewers. The extra-marital affairs of series-regular Dick Moran were largely tolerated, but when much-loved character Miley had a literal roll-in-the-hay in a barn with Fidelma, his wife Biddy’s cousin, there was a national outcry, so invested were viewers in the lives of Burrowes’s onscreen characters.

Burrowes won a number of awards for his television writing, including three Jacob’s awards in 1965, 1974 and 1976 (the latter two for The Riordans). Having left the Glenroe writing team in 1998, he made his first foray into cinema came in 2000 with the well-reviewed Rat, a surrealist comedy starring Imelda Staunton and Pete Postlethwaite. He followed this with the less favourably received Mystics in 2003, starring Milo O’Shea and David Kelly. His only novel Trusted like a fox was published posthumously in 2017 and contains traces of Burrowes’s personal experiences growing up in Northern Ireland.

He suffered a stroke in 2011 and remained in poor health until his death on 31 December 2015 at Kinvara Nursing Home, Bray, Co. Wicklow. His funeral took place on 6 January 2016 at the Christ Church, Bray, followed by cremation. In 1967 Burrowes had composed the lyrics of Sean Dunphy’s (qv) Eurovision entry ‘If I could choose’, which came second in the competition. The song was played as his remains were carried from the church.

In a tribute to the writer, Noel Curran, then director-general of RTÉ, described Burrowes as ‘the master’ of Irish television serial drama, saying ‘Wesley did not simply create plotlines, he created entire worlds, populated with original characters who themselves became household names on a scale unheard of before or since.’ (Irish Times, 31 Dec. 2015)