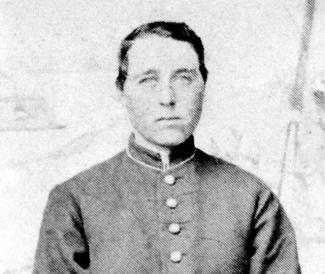 Cashier, Albert (1843–1915), soldier, was born Jennie Irene Hodgers on 25 December 1843 in Clogherhead, Co. Louth. Although born female, from an early age he dressed as a male. Little is known about his early life – he gave conflicting accounts throughout his life and was suffering from dementia when he spoke about it in 1913 – but there is evidence that his parents were named Patrick and Sallie Hodgers. Born into poor circumstances, which presumably deteriorated during the famine years (1845–9), he was sent out to work at an early age by his stepfather and remained illiterate throughout his life. It is believed that his mother died while he was young, and in 1859 he left Ireland for America, travelling as a stowaway first to Liverpool and then to New York. From there he went to Belvidere, Illinois, where he worked in a shoe factory, and then as a labourer, farmhand and shepherd for a farmer.

At the beginning of August 1862 Cashier, aged nineteen, responded to Abraham Lincoln’s call for soldiers and enlisted in G company of the 95th Illinois infantry regiment, signing his enlistment papers with an ‘x’. He was described as having a light complexion, blue eyes and auburn hair and, at just five foot three inches, was the shortest soldier in the company. He was one of more than 400 documented cases of soldiers who were born female but enlisted as men to fight in the civil war. Their motivations were as varied as those of the men they fought alongside: they joined out of patriotism or a desire for adventure, for steady wages, or sometimes followed a loved one into battle. Most easily passed an initial physical examination that consisted of checking they had teeth strong enough to rip open powder cartridges and four functioning limbs for marching and firing weapons. Heavy, ill-fitting uniforms concealed body shape and, because many youths joined up, a lack of facial hair was not seen as suspicious. Cashier had the added advantage of small-pox scars, which gave him a more masculine look.

From August to November 1862 G company trained at Camp Fuller in Rockford, Illinois, before taking a river steamer to Columbus, Kentucky. As part of the army of Tennessee, at one time under the command of General Ulysses S. Grant, the 95th took part in more than forty battles, including the siege of Vicksburg (May–July 1863); the battle of Guntown in Mississippi (June 1964), where they suffered heavy losses; and the battle of Nashville in December 1864, the last major battle of the western theatre. In total Cashier’s regiment travelled almost 9,000 miles by foot, rail and boat and lost 289 soldiers to death and disease. Cashier was a skilled marksman and a brave soldier. His comrade Sergeant C. W. Ives recounted that during the siege of Vicksburg, Cashier was taken prisoner during reconnaissance but escaped by wresting a gun away from his captor and making his way back to union lines; during his escape he taunted confederate soldiers yelling, ‘Hey you darn rebels, why don’t you get up where we can see you?’ (Chicago Tribune, 29 Aug. 2019). On another occasion he reportedly rescued his company’s flag and hung it from the highest branch of a tree.

The 95th were camped near New Orleans when the Confederate commander General Robert Lee surrendered to Grant at Appomattox courthouse on 9 April 1865, effectively ending the war. On 15 August the 95th marched into Belvidere as returning heroes, and two days later Cashier was mustered out, having served a full three-year enlistment. Initially he settled in Belvidere, and when an army comrade, Amos Morton, invited Cashier to join him and his wife in Iowa, Cashier chose to stay, opening a plant-nursery with another comrade, Samuel Pepper. For reasons unknown, the venture came to an end and in 1869 Cashier moved to the small town of Saunemin, south-west of Chicago in the county of Livingston, Illinois. He initially worked as a farmhand, living with his employer Joshua Chesbro and his family, but also worked for the town and was variously employed as church janitor, cemetery worker and street lamplighter over the next forty years. In 1885 Chesbro built a small house for him and the 1900 census lists Cashier as ‘head of house, white, male … age 57, born in Ireland with both parents also born in Ireland, worked as a janitor, cannot read or write, owned house’. Immensely proud of his military service, he marched in his civil war uniform every year at the annual Memorial Day parade and bought ice-cream and treats for local children afterwards, despite their teasing him as a ‘bugle boy’.

Living as a man, Cashier was able to vote in elections, hold a bank account and eventually claim a military pension, all things that would have been denied to Jennie Hodgers, and he maintained his independence until 1911 when forced into sheltered accommodation by an accident: he was carrying out repairs underneath the car of state senator Ira Lish when the senator accidently drove over him. In the course of his medical examination his birth gender was uncovered. Since his injuries meant he could no longer look after himself, on 5 May 1911 Lish arranged for him to be admitted to the Soldiers’ and Sailors’ Home in Quincy, Illinois. Cashier lived there happily for two years. He received a veteran’s pension and was visited by old army comrades, including the captain of G company. As his mental condition deteriorated, however, his secret leaked into the press. On 6 May 1913 the Syracuse Herald ran an article headlined ‘Civil War veteran is a woman’, while the Irish Independent told ‘the romantic story of a woman named Hodgens [sic]… who enlisted in the American army …’ (13 Dec. 1913).

By March 1914 Cashier’s dementia was so advanced that he was moved to the Western Hospital for the Insane at Watertown, Illinois, now the East Moline State Hospital. His committal papers described him as having no memory and being ‘noisy at times, [a] poor sleeper and feeble’ (Clausius, 386). Such a move necessitated a court hearing and, when word of his birth gender reached the national press, the US government launched an investigation into whether Cashier had obtained his pension by fraud. Several comrades from the 95th came forward to testify on his behalf, including Corporal Robert D. Hannah who confirmed that he had served with him, and Cashier’s pension was secured. His final months in the asylum, however, were very unhappy. In contrast to the veterans’ home where Cashier lived as he always had, the state hospital took away his union uniform and forced him to wear a dress, despite protests from former comrades and friends. Frail and confused, he attempted to fashion the dress into trousers but the unaccustomed clothing caused him to trip, breaking his hip. He was bedridden for his final months and died on 10 October 1915.

Albert Cashier was given an official Grand Army of the Republic funeral on 12 October and was buried in Saunemin with full military honours: he was dressed in his union uniform, his coffin was draped with the American flag and his tombstone recorded his military service. His name is listed on the internal wall of the Illinois memorial at Vicksburg Military Park.