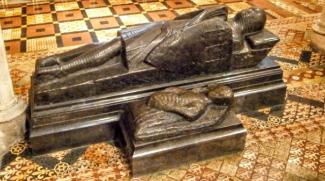 Clare, Richard de (‘Richard fitz Gilbert’, ‘Strongbow’) (a. 1127–1176), earl of Pembroke and Strigoil and lord of Leinster, and one of the pivotal figures of Irish history, was eldest son of Gilbert de Clare, earl of Pembroke, and his wife Elizabeth, daughter of Robert de Beaumont, earl of Leicester. He succeeded to his father's earldom in 1148 and was one of the few earls that steadfastly supported King Stephen to the end of his reign (October 1154). As a result, Henry II (qv) refused to recognise the earldom of Pembroke, and the relations between king and ‘earl’ remained strained, with Strongbow claiming that the king deliberately withheld lands due to him by inheritance. Gerald of Wales (qv) described him as having ‘a great name rather than great prospects’.

He probably met Diarmait Mac Murchada (qv), king of Leinster, after the latter had been expelled from Ireland and was actively recruiting mercenaries to retake his kingdom in the winter of 1166–7. It was probably at this time that Mac Murchada promised his daughter Aífe (qv) in marriage to Strongbow, who was careful to gain Henry II's nominal assent for an expedition to Ireland, although the king may have deliberately delayed his departure by sending him in the party that escorted Matilda, Henry II's daughter, to Germany in 1168. Henry's approval was reluctantly given and erratic. Before Strongbow finally set sail (August 1170), the king tried to prevent his departure and then confiscated his lands in Wales and England. He landed near Waterford on 23 August 1170 with a force of some 200 knights and 1,000 other troops. Two days later he attacked Waterford with the assistance of Raymond fitz William (‘Le Gros’) (qv) and took the city after a fierce battle. He was joined in Waterford by Mac Murchada and his daughter Aífe, and the couple were married soon afterwards. They were also joined by the other leaders of the Anglo-Normans, and all agreed that it was vital for them to capture Dublin. Leaving a token force in Waterford, they marched on Dublin by the unusual route of the Wicklow mountains, which caught the defenders unprepared. Although Mac Murchada negotiated for the surrender of the city, it fell to a surprise attack by Milo de Cogan (qv) and Raymond Le Gros. The Anglo-Normans turned it over to Strongbow rather than Mac Murchada, indicating that their loyalties were to him, not to their nominal employer.

From Dublin, Strongbow and his father-in-law turned north to campaign against Tigernán Ua Ruairc (qv), king of Bréifne, and successfully overthrew his authority in Meath. Mac Murchada died in Ferns in May 1171, at the height of his power, leaving his kingdom to Strongbow, who found himself in a difficult position, pressed by the Gaelic Irish on one side, led by Ruaidrí Ua Conchobair (qv), king of Connacht, and the displeasure of Henry II on the other. Strongbow was able to hold off Ua Conchobair but could not gain recognition of his holdings, although he may have offered to hold his lands of the king of Connacht. Henry II was a more pressing problem. Strongbow had already sent Raymond le Gros to the king with a diplomatic message acknowledging that all his gains in Ireland were at the king's disposal. Two more messengers, Maurice fitz Gerald (qv) and Hervey de Montmorency (qv), were sent to the king to continue negotiations. De Montmorency urged Strongbow to travel to the king and make peace with him before the king came to Ireland. Strongbow travelled to England and met the king at Pembroke, where they negotiated a generous compromise, recognising that both had much to lose by confrontation. In return for Strongbow's recognition of his overlordship and the cities of Dublin, Wexford, and Waterford, Henry II recognised his comital status, returned all of his lands in Wales, England, and Normandy, and also appointed him constable of Ireland and granted him the rest of Leinster to hold as a tenant-in-chief, although he did not restore him to the earldom of Pembroke.

Strongbow returned to Ireland with the king, formally surrendering his lands at Waterford (18 October 1171). He does not seem to have travelled with the king while in Ireland, preferring to secure his hold on his new lordship. The king made Hugh de Lacy (qv) lord of Meath to counterbalance Strongbow's lordship of Leinster, and did not give Strongbow the governance of Ireland when he left, but Strongbow does not seem to have pressed for this. He quarrelled with Raymond le Gros in 1172, when he refused to let le Gros marry his sister Basilia, and would not appoint him constable of Leinster. He lost le Gros's service after the quarrel, when the latter left Ireland to serve the king. Strongbow was summoned to Normandy by the king after the rebellion of the king's son Henry in 1173, and was entrusted with the fortress of Gisors. In August 1173 he was summoned to the king's side to help relieve Hugh de Lacy. Strongbow was allowed to return to Ireland to recruit troops for the king, who made him his representative in Ireland and constable of Waterford and Dublin, and returned the town and castle of Wexford to his lordship. He successfully recruited troops for the king and sent them to Normandy by way of England, where they fought against the rebellious earl of Leicester.

Strongbow's position as chief governor of Ireland was greatly weakened by the removal of so many capable soldiers, and he was pressed by the Gaelic lords led by Ua Conchobair. He appealed to Raymond le Gros to return to Ireland, offering his sister's hand and the constableship of Leinster. The combination of Strongbow and le Gros was too potent for the Gaelic Irish to resist, and they raided westwards into Munster and Limerick. The Gaelic Irish retaliated when le Gros was forced to return to Wales because of the death of his father; and Strongbow, unable to stop them from destroying his castle at Kilkenny, retreated to Waterford. His retaliatory expedition into the kingdom of Limerick was halted at Thurles by Domnall Mór Ua Briain (qv), king of Thomond, forcing him to retreat. This retreat demoralised all the Anglo-Norman colonists, and the Gaelic Irish pushed them back towards Dublin and Waterford. Strongbow again asked Raymond le Gros to return with aid, and again the two of them managed to contain the threat. In 1175 they reconquered Meath; le Gros, in alliance with Ua Conchobair, campaigned against Ua Briain, taking Limerick and deposing Domnall Mór. Strongbow had returned to England where he was at court when the treaty of Windsor was being negotiated with Ruaidrí Ua Conchobair. When he returned to Ireland, he remained in Dublin, while le Gros was on campaign in Munster. Strongbow was apparently already ill when le Gros left for Munster and died in late May 1176. By some accounts he was buried in Christ Church, Dublin: according to others, in Gloucester. On his death, he left two legitimate children, Gilbert and Isabella (qv), from his marriage to Aífe. His lordship was taken into the king's hand because Gilbert was still a minor, but the king seems to have fully respected their rights of inheritance. Gilbert fitz Richard, who was no more than 5 years of age at the death of his father, died in 1185, leaving his sister as the sole heir to Strongbow's lordships. She was married to William Marshal I (qv), and through her the de Clare lands in Ireland, Wales, England, and Normandy passed to the Marshal family.

Most of our information about Strongbow and the Norman invasion of Ireland comes from two sources, the ‘Exugnatio Hibernica’ by Gerald of Wales, and the anonymous poem usually referred to as the ‘Song of Dermot and the earl’. The two works give very different views of his importance in the early years of the English lordship in Ireland, but taken together, a reasonably clear picture can be formed. Richard fitz Gilbert took a large risk coming to Ireland but made it pay off. He had been on bad terms with the king for more than fifteen years but died as the king's representative in Ireland. Through loyal service to the king in Ireland and France, he regained the comital status lost in 1154, although not the lordship of Pembroke. However, Pembroke returned to his family when his son-in-law William Marshal was created earl of Pembroke in 1199. His arrival in Ireland turned an essentially static power-struggle into an offensive conquest, although much of the credit for this change has to be given to the combination of Strongbow and Raymond le Gros. Together they were an extremely effective team. Without le Gros, Strongbow was less able to dominate effectively his new country. While he showed undoubted loyalty and courage, he seems to have been more of a courtier and a strategist, needing le Gros for the tactical side of the conquest. However, none of this takes away from his impressive achievement, and the fact that he carved out a huge lordship to pass to his heirs.