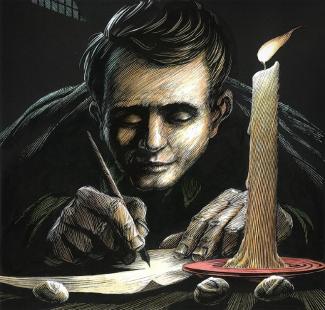 Colbert, Cornelius (‘Con’) (1888–1916), revolutionary, was born 19 October 1888 in Moanlena, Castlemahon, Newcastlewest, Co. Limerick, son of Michael Colbert, small farmer, native of Athea, Co. Limerick, and Honora Colbert (née MacDermott), originally of Cooraclare, Co. Clare. His family on both sides had a tradition of Fenian and nationalist activity. When he was about three the family moved to Athea, where they resided in Galeview House, and his father farmed part of the old Colbert lands at Templeathea. He attended Athea national school, save for a brief period when, while living with relatives in Ballysteen, he attended Kilcolman national school. From childhood he had a lively interest in national affairs, local history, and the Irish language (still spoken at that time by many older people in west Limerick). Moving in early adolescence to live with a sister in Dublin, he continued his schooling under the Christian Brothers, completing primary education at St Mary's Place, and receiving secondary education at the O'Connell schools, North Richmond St. (c. 1905). Thereafter he obtained a junior clerkship in Kennedy's bakery, Parnell St., remaining until his death.

Joining the Gaelic League, he became a fluent Irish-speaker, and an enthusiastic participant in the league's social, cultural, and educational activities. He enrolled in Na Fianna Éireann, the national boy-scout organisation founded by Bulmer Hobson (qv) and Constance Markievicz (qv), at the inaugural meeting (16 August 1909); appointed captain of the Inchicore branch, eventually he became chief scout of Ireland. Highly proficient at military drill, having employed a British army instructor for private lessons, he conducted Fianna classes in drill, small arms, signalling, scouting, map reading, and first aid, often while on field manoeuvres in the countryside near Dublin. An active Fianna recruiting agent, he spent summer holidays on recruitment work cycling through the country, especially in the familiar landscape of his native Limerick. Appointed part-time drill instructor (1910–16) at St Enda's school by the headmaster, Patrick Pearse (qv), who had experienced difficulty finding an instructor who could speak Irish, he indignantly refused Pearse's offer of a salary, expecting no remuneration for work undertaken in the national interest.

Recruited into the Irish Republican Brotherhood, he became head of an IRB circle composed entirely of Fianna members, formed in 1912 by Hobson, the IRB Dublin centre. In July 1913 Colbert and others of the circle commenced secret drilling of IRB members at the National Foresters Hall, Parnell Square. A small, stocky man standing just over 5ft (1.52m) in height, with a quiet-spoken, earnest energy, Colbert pressed his charges hard; insistent on discipline and efficiency, he inspired respect and enthusiasm. Deeply pious and zealously abstemious, he frequently expounded his view that Irish revolutionary movements had consistently failed owing to ‘drink and want of discipline and loose talk’ (Barton (2002), 242). He was among five Fianna and twelve IRB activists elected to the thirty-man provisional committee of the Irish Volunteers at the inaugural meeting in the Rotunda (25 November 1913). Appointed captain of F Coy, 4th Bn, Dublin Bde, he was deeply involved in drill instruction, and selection and training of Volunteer officers. After the split in the Volunteer movement over the pledge by John Redmond (qv) to support the British effort in the first world war (September 1914), Colbert organised companies of the anti-war Irish Volunteers in Limerick and elsewhere. In the weeks immediately preceding the Easter rising he acted as bodyguard to members of the IRB military council.

On Easter Monday morning (24 April 1916), Colbert commanded a contingent of twenty men that established a 4th Bn outpost in Watkin's brewery, Ardee St. Apart from a brief initial exchange with British troops advancing from Richmond Barracks towards the city centre, the garrison saw little action. Judging his position ineffective, early on Wednesday morning Colbert moved his command to reinforce the larger garrison in Jameson's distillery, Marrowbone Lane, closer to the battalion's main position under Éamonn Ceannt (qv) in the South Dublin Union, where the fighting was fierce. Under Colbert's de facto command, the combined force in Marrowbone Lane included several Fianna scouts and some two dozen women of Cumann na mBan, in an atmosphere of easy camaraderie and relative equality. Engaged over the next three days in sporadically heavy fighting, the garrison sniped effectively at neighbouring British positions, and smartly repulsed an attack with rifle fire and grenades. Their communications cut, they were blissfully unaware of events elsewhere, and maintained spirited morale, reputedly planning a ceilidh for the Sunday night. Colbert was incredulous on receiving the general surrender late on Sunday afternoon (30 April), and wept openly. Court-martialled and sentenced to death (4 May), despite his marginal role in the fighting he was designated for severe treatment owing to his pre-rising activities and connection with Pearse. He was shot by firing squad in Kilmainham jail (8 May), and buried in the common grave in Arbour Hill jail.

Aged twenty-seven, Colbert was among the youngest of the insurgent leaders to be executed. Owing to his youth and relatively junior rank, his execution was one of the most shocking to public opinion. Unmarried, by 1916 he resided at 7 Clifton Terrace, Ranelagh. After the rising his sister Lila Colbert served on the committee of the Irish Volunteers Dependents’ Fund. A parish hall and community centre dedicated to his memory was formally opened in Athea in 1974. Limerick's railway station was named Colbert station in 1966.