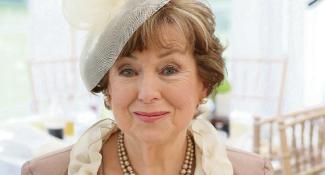 Colgan, Eileen (1934–2014), actor, was born on 2 January 1934 in Dublin to Charles Colgan, a cabinet maker, and his wife Eileen (née McNamara). She was one of five children (three boys and two girls) and grew up on Russell Street on the north side of the city. Her father and an elder brother Charles both died of tuberculosis in 1944 when she was just ten years old. The family then moved to Foster Terrace in Ballybough and Eileen Colgan senior worked as a cleaner to support them. The Colgans’ was a literary household and young Eileen was an avid reader; she was also a gifted singer. Her brother Gerry would go on to become a long-serving theatre critic at the Irish Times.

Eileen was singled out as having a possible religious vocation and aged fourteen was sent first to a convent in Kent, England, before entering another in Lisieux in Normandy as a novice nun. She was a diligent student and spoke excellent French but decided not to join the order and returned home to Dublin. She would have a lifelong affinity with France.

On her return home Colgan undertook a secretarial course and worked in various offices, including a travel agency. She developed an interest in theatre, and in her early twenties began voice and acting lessons with Abbey actor Shelah Richards (qv). Her first acting job was with John Molloy's ‘fit-up’ company touring the west of Ireland. She was then cast in minor roles in plays including ‘The tender trap’ with Milo O'Shea (qv) at the Gas Company theatre in Dun Laoghaire and ‘God’s child’ (1959) at the Pike (where she had worked for a time selling tickets and ice creams). Her breakthrough role came in 1960 when her future husband Alan Simpson (qv), co-founder with Carolyn Swift (qv) of the Pike theatre (1952–60), cast her in James McKenna’s musical about Teddy-boy culture and Irish emigration, ‘The scatterin’. After a successful run at the Olympia in Dublin, it transferred to London.

She married Simpson in 1963 and moved to London where they had four children together (Katy, Cathal, Ben and Clara), and lived at various addresses including Ladbroke Grove and Oxford Gardens. Simpson worked at London, Stratford, Oxford and Edinburgh, and Colgan acted in many of his productions while also landing other theatre, television and radio work. Her first credited television role was in the BBC television series Festival (1963). The following year she was well-reviewed as Pegeen Mike in a British television production of ‘The playboy of the western world’ (1964). She appeared in various theatrical BBC television series throughout the 1960s including Story parade (1964), Thirty-minute theatre (1967–8), Theatre 625 (1965–8) and The Wednesday play (1965–8).

Simpson was appointed artistic director of the Abbey theatre in December 1968, precipitating a return to Dublin. Colgan made her feature film debut with a small but memorable role alongside Gene Wilder in Quackser Fortune has a cousin in the Bronx (1970) and the following year joined the Abbey company, working in numerous productions and cementing her place as Irish theatre royalty over a seventeen-year period (1971–88).

In her first year at the Abbey she took on the role of, and became synonymous with, Molly Bloom in Marjorie Barkentin’s ‘Ulysses in Nighttown’ (staged at the Abbey’s sister theatre the Peacock in 1971). She would reprise this role many times at the Abbey and at other theatres, in Ireland and internationally (including in 1982 at the Joyce centenary celebrations in Tokyo, Japan), as well as giving readings of the Molly Bloom soliloquy from James Joyce’s (qv) Ulysses. Other characters she made her own included Mrs Cafferty in ‘Mary Makebelieve’ (1982), a musical written by Fergus and Rosaleen Linehan and scored by Jim Doherty, based on James Stephens' (qv) serialised fable The charwoman's daughter (1910). During her tenure at the Abbey, Colgan also acted in productions of Brendan Behan’s (qv) ‘Richard’s cork leg’ (1972) and ‘The hostage’ (1981), Shakespeare’s ‘Measure for measure’ (1977) and ‘The winter’s tale’ (1980), Lennox Robinson’s (qv) ‘The whiteheaded boy’ (1974), J. M. Synge’s (qv) ‘The well of the saints’ (1979), Sean O'Casey’s (qv) ‘The plough and the stars’ (1984) and Brendan Kennelly’s (d. 2021) adaptation of ‘Antigone’ (1986) among many others, as well as frequently touring with the company. Her final appearance as an Abbey player was in a 1988 dramatised performance of ‘Ulysses’ staged at the Peacock, at which she delivered her signature Molly Bloom soliloquy. Alongside her theatre work she appeared in important Irish television dramas including a Jacob’s award-winning turn in Heno Magee’s stark inner city drama Hatchet (1973), and as central character Mrs Mulhall in the landmark series Strumpet City (1980).

She achieved household name status with a five-year stint in RTÉ’s long-running soap opera Glenroe (1995–2000) playing Mynah Killeen, the busy-body housekeeper to the local priest, followed later by Fair city (2012–13) playing Esther Roche. Colgan also appeared in BBC series Vanity fair (1987) and Ballykissangel (2001). She continued to appear on stage throughout this time, with notable turns alongside Milo O’Shea and David Kelly (qv) in ‘The sunshine boys’ (1996), John B. Keane's (qv) plays 'The matchmaker' (2000) and 'Moll' (2001), Jennifer Johnston's 'The desert lullaby' (2004), and ‘Dirty dusting’ (2006) with Adele King (Twink) and Joan O’Hara (1930–2007), about a trio of elderly cleaners who set up a sex-chat line. One of her last stage appearances was in 2007, with daughter Clara Simpson, at the Théâtre National Populaire, Villeurbanne, in French language versions of Samuel Beckett’s (qv) ‘Come and go’ and ‘Not I’.

Eileen Colgan died on 10 March 2014 aged eighty. Her funeral mass was held on 13 March at the Church of the Visitation, Fairview, and she was buried with her husband (d. 1980) in the Simpson family plot at St Patrick's Cemetery, Enniskerry, Co. Wicklow. Tributes to Colgan emphasised her emotional range as an actor, as well as her compassion, kindness, solidity and warmth as a friend.