Contributed by
Murphy, John A. 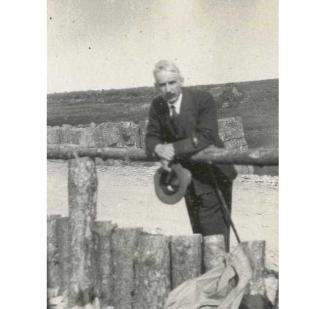 Corkery, Daniel (Ó Corcora, Domhnall ) (1878–1964), writer, cultural philosopher, and literary critic, was born 14 February 1878 at Gardiner's Hill, Cork city, one of five children of William Corkery and Mary Corkery (née Barron). The Corkerys were of carpentering stock for four or five generations, and competent craftsmanship was to become one of Daniel's sparetime activities. He had a congenital bone deformity in his left leg which made him dependent for life on a walking stick and a surgical boot. He also had to overcome a stammer. These problems help to explain his lonely childhood, which also, however, predisposed him to habits of reading and study, and he was largely self-taught. He never married and spent his whole life in the Cork area.

He was educated at the Presentation Brothers' South Monastery school and became a monitor, going on to do a year's teacher training at St Patrick's College, Drumcondra, in 1906–7. He taught for some years at St Francis's national school in Cork city centre. Meanwhile under the influence of the Leader (edited by D. P. Moran (qv)), to which he was to become a regular contributor, he joined the Gaelic League, thus beginning his role of cultural nationalist. His Irish, however, was never to be proficient. The League gave him an opportunity for social and cultural activities such as choral and musical performance. He played the cello and also took night classes in painting at the Crawford School of Art. He did sketching during League outings to the Cork Gaeltacht, becoming a watercolourist of some distinction, and this pursuit engaged him till very late in life.

While he developed his cultural philosophy and his enthusiasm for Irish Ireland, he also began writing short stories. In 1908 he was one of a group which established the Cork Dramatic Society (CDS). Its initial production, at the hall in An Dún, was Corkery's first play, ‘The embers’, a satire on contemporary Irish politics which was adjudged a critical success. Corkery's associates in the CDS included Con O'Leary (qv), a UCC graduate who wrote two plays for the society and who was to become a leading Fleet Street journalist; T. C. Murray (qv), the Macroom-born naturalist playwright; and Terence MacSwiney (qv), who became a close friend. MacSwiney and Corkery shared a deep attachment to the west Cork Gaeltacht of Ballingeary, which Corkery first visited in 1909.

In 1913 he took up a teaching job in the north-side slum school of St Patrick's in noisy and overcrowded conditions. Among pupils whose potential he encouraged were Michael O'Donovan (whose alias was to be Frank O'Connor (qv)); and Seamus Murphy (qv), the future sculptor. The 1916 rising and subsequent developments intensified his nationalist fervour (P. H. Pearse (qv) had visited Corkery's house in 1913). He left St Patrick's in 1920, reputedly being refused the principalship because of his political sympathies. He spent the next ten years working in various capacities under the auspices of Cork county vocational education committee. He was a travelling teacher of art, woodwork, and Irish, did clerical work for a time, and then served as an inspector in the Irish language.

Meanwhile his creative powers had found expression in various ways. Among his plays produced were ‘The labour leader’ (1919), ‘The yellow bittern’ (1920), and ‘Resurrection’ (1924). His most impressive work of short stories, The Munster twilight, was published in 1916, but there were to be other collections – The hounds of Banba (1920), The stormy hills (1929), and Earth out of earth (1939). His literary reputation was greatly enhanced by the publication of his first novel, The threshold of quiet, in 1917. This work of sombre realism, set in Cork city with autobiographical elements, was held in high regard by Frank O'Connor and Sean O'Faolain (qv) long after they had become estranged from their former guide.

The hidden Ireland, a study of the Irish-language poetry of eighteenth-century Munster and of the society and culture it reflected, appeared in 1924. It was his most significant and controversial work, provoking lively debate for decades, while its title introduced a new phrase into Irish cultural discourse. Synge and Anglo-Irish literature (1931) was his last major publication. While Corkery appreciated the awareness that J. M. Synge (qv) had of authentic Irish cultural factors, he was contemptuous of Anglo-Irish literature and of the so-called literary revival in general, believing that it was a provincial British phenomenon, that by and large it did not treat of the three indispensable elements of Irish identity – religion, nationalism, and the land – and that a truly distinctive national literature was possible only through the Irish language. (Corkery's own attachment to catholicism was problematic, some of his friends and acquaintances believing that he was a covert agnostic.) It was in Synge that Corkery famously defined the Irish people in terms of the crowd he observed at a Munster hurling final in Thurles.

In 1931 Daniel Corkery was appointed to the professorship of English in UCC, Sean O'Faolain being his main rival for the post. The episode was something of a cause célèbre, given the relationship between the two candidates, the older (53) unforgiving mentor and the younger (31) estranged protégé, and given, too, the contrasting cultural philosophies they had come to represent. O'Faolain himself immortalised the contest in Vive moi!, giving his own richly creative and entertaining account of canvassing bucolic UCC governors in his campaign for the chair.

As a professor, Corkery did not loom large as a ‘college person’, avoiding academic meetings and staying clear of college politics, though he gave some public lectures and participated in student society debates. His academic position enhanced his seminal ideological and literary influence and his central role in the national debate about history and culture. His impact on students was mixed. He did not suffer ‘social’ students gladly, and he was better with small groups than with large classes. He was an inspiration to kindred spirits and to those who shared his views about the Irish language being the proper medium for Irish writers. For Seán Ó Tuama, his disciple and most distinguished student, he was quite simply ‘the best teacher of literature I had met or would meet’.

Corkery retired from UCC in 1947. The NUI honoured him with a D.Litt. degree the following year, but he declined an invitation to become a member of the Irish Academy of Letters because of its neglect of Irish-language writers. He also sat on the Arts Council in the mid 1950s. Another recognition of his national standing was his appointment to Seanad Éireann (1951–4) as one of the nominees of the taoiseach, Éamon de Valera (qv). However, he made no contribution whatsoever to the proceedings of the house. In his declining years he was the cultural patriarch or guru of a devoted Cork circle, whose members visited him in his seaside bungalow home in Myrtleville in south Cork. That circle excluded – even in conversational mention – his erstwhile protégés Sean O'Faolain and Frank O'Connor (‘Corkery's gluggers’, in the wicked Cork phrase) who had long since rejected his ideology as provincial and illiberal. Daniel Corkery died at Passage West, Co. Cork, on 31 December 1964. The biography by Patrick Maume (1993) has a comprehensive list of sources, which include an extensive Corkery archive at UCC.

Corkery was the most eloquent and influential advocate – through the English language, for the most part – of the Irish-Ireland ideal in the twentieth century. While his critics, from Sean O'Faolain onward, could not accept what they regarded as his restrictive if not racist criteria for true Irishness and for a distinctive Irish literature, his disciples saw him as the visionary intellectual, the chief philosopher of the Irish language and cultural movements. His brilliantly written The hidden Ireland – a sacred text for the faithful – has been criticised as greatly flawed social history but acclaimed for its literary and cultural insights. The book became a posthumous battleground between revisionists and traditionalists. In the process, as Seán Ó Tuama has observed, Corkery became ‘an undeserving casualty of ideological warfare’.