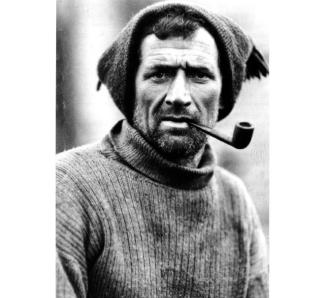 Crean, Thomas (‘Tom’) (1877–1938), sailor and Antarctic explorer, was born either on or shortly before 16 February 1877 at Gurtuchrane, near Anascaul, Co. Kerry, one of eight sons and three daughters of Patrick Crean, farmer, and Catherine Crean (née Courtney). (His birth certificate states that he was born 25 February, but the local parish records, which are more reliable, have his baptism occurring on 16 February.) It was common for local boys to join the Royal Navy, which he did in 1893. In 1901 he was serving as an able seaman on board HMS Ringarooma at Port Chalmers, New Zealand. He volunteered to join Capt. R. F. Scott's British Antarctic expedition of 1901–4 when the Discovery put in at Port Chalmers to take on provisions. During the course of the expedition, he impressed both Scott and Sir Ernest Shackleton (qv) with his intelligence and physical toughness. He was awarded the Polar Medal and made a petty officer on his return to England and later served aboard HMS Bulwark.

He travelled to the Antarctic a second time aboard the Terra Nova with the ill-fated British Antarctic expedition of 1910–13, working as a member of the support parties preparing supply depots for the polar team. In January 1912 he served with Lt Edward Evans (later Adm. Lord Mountevans) and William Lashly on the last supporting party for Scott's team as they prepared to make an attempt on the south pole. Leaving the polar party on 4 January, they were the last to see the men alive. On the return to the base camp Evans took ill; when he could go no further, Crean went in search of help, travelling for eighteen hours in blizzard conditions. Both Crean and Lashly were awarded the Albert Medal for saving the life of their team leader. Crean was one of the search party that discovered the bodies of Scott's party in November 1912.

He returned to Britain in June 1913, but had been recruited by early 1914 for an Antarctic expedition led by Joseph Foster Stackhouse. The Stackhouse expedition was postponed, however, thereby freeing up Crean whose appointment as second officer to Sir Ernest Shackleton's Imperial Transantarctic expedition (1914–16) aboard Endurance was announced in June 1914. Alongside Shackleton and Timothy (‘Tim’) McCarthy (qv), he was one of the crew of the longboat, the James Caird, that sailed in April 1916 from Elephant Island to South Georgia for assistance after the Endurance was beset and crushed by ice. Throughout this epic seventeen-day journey of over 800 miles (1,287 km) he tried to keep the crew's spirits up by singing and engaging in what one of them later called a ‘comic revolt against the conditions’ (Huntford, Shackleton, 546). Despite the hardships he endured on this voyage and on the gruelling hike that followed reaching South Georgia, he insisted on returning to Elephant Island with the ship that eventually rescued the remaining crew of the Endurance.

He arrived back in England in November 1916 and was promoted acting boatswain (warrant officer) on 27 December, being confirmed as such on 2 January 1918. In March 1917 he was attached to HMS Colleen, a patrol ship in Cobh, in March 1917.  Later serving aboard HMS Inflexible, HMS Fox, and HMS Hecla, he took part in a series of voyages to northern Russia during the Allied anti-Bolshevik intervention before retiring from the navy in March 1920. During the course of his naval career, he was awarded the Polar Medal with three Antarctic clasps, the Albert Medal, the Naval Long Service and Good Conduct Medal, and also war service medals. Edward Evans dedicated his book South with Scott (1921) to Crean and Lashly. The Crean Glacier on South Georgia and Mount Crean in Antarctica were named in his honour.

In September 1917 he had married Eileen (‘Nell’) Herlihy, daughter of an Anascaul publican, and after his retirement he settled in his native Anascaul where he had bought a pub in 1916. The couple had three daughters: Mary, Katherine (d. 1924), and Eileen. While he considered joining Shackleton's Quest expedition, he ultimately decided to remain in Anascaul. He maintained a low profile during the war of independence, seldom referring to his previous naval career. His elder brother Cornelius Crean (b. 1872), sergeant in the RIC, was killed in an IRA ambush at Ballinspittal, Co. Cork, in April 1920. That very month, Tom had attended a protest in Tralee, Co. Kerry, against the treatment of republican prisoners, being held in Mountjoy Jail.

He never ran the pub, leaving that to others; it was refurbished in 1929 and (aptly) renamed ‘The South Pole Inn’. In July 1938 Tom Crean suffered an acute attack of appendicitis and died 27 July 1938. He was buried in a family tomb that he had previously built himself in Ballynacourty graveyard, outside Anascaul. His funeral was attended by a large crowd.

In the decades that followed Tom Crean was largely forgotten, despite the fact that he spent more time in the Antarctic than either Scott or Shackleton. During the 1980s, however, there was a massive revival of public interest in his story and he has been elevated to the status of a modern Irish icon. In 1987 a memorial was erected to him on the front of the South Pole Inn and an exhibition was opened in the museum in Dingle. This exhibition was later moved to Tralee. In 1997 a group of Irish sailors and mountaineers made an attempt to sail from Elephant Island to South Georgia in an open boat named Tom Crean but the boat foundered en route. Crean has since been the subject of a best-selling biography (Michael Smith's Unsung hero) and has been the subject of several TV and radio documentaries and a Guinness TV advertisement. In the 1948 film Scott of the Antarctic his part was played by John Gregson. In Kenneth Branagh's 2002 film Shackleton, Frank McGann played Tom Crean. In 2003 a statue by Eamon O'Doherty was unveiled in Anascaul.

DOI: https://doi.org/10.3318/dib.002175.v1
Originally published October 2009 as part of the Dictionary of Irish Biography
Last revised March 2021
Revision comments: Updating of material relating to his birth, to his promotion to acting boatswain and to his pub.