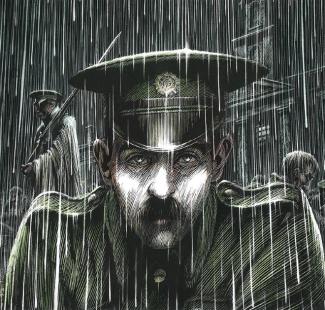 Daly, Edward (1891–1916), republican, was born 28 February 1891 at 26 Frederick St., Limerick city, the only son and youngest among ten children of Edward Daly (1848–90), Fenian and wood-measurer, and Catherine Daly (née O'Mara), dressmaker. An uncle, John Daly (qv), had acted as national organiser for the IRB until imprisoned in 1884. His sister Kathleen (qv) married the IRB leader Tom Clarke (qv). The family endured some financial insecurity in his infancy until provided for by another uncle, James Daly, an emigrant returned from Australia in great prosperity. His upbringing was profoundly coloured by the Fenian nationalism of mother, aunt, and sisters, praying daily for the release and well-being of his uncle, and for Irish independence. Schooled first by Presentation nuns at Sexton St., then by the Christian Brothers at Roxboro Rd, he completed his academic education at Leamy's commercial college (1906). Initially groomed to inherit John Daly's bakery, he was sent to take up an apprenticeship in a Glasgow bakery (1907), but finding the airless heat of ovens damaging to a somewhat frail constitution, he came back to Limerick to work as a rather shy, though cheerful, clerk in Spaight's timber yard, his father's old employer.

In 1912 he moved to a clerkship in a builders’ providers in Dublin, and then to a post in May Roberts & Co., wholesale chemists, and took a room with Kathleen and Tom Clarke on Richmond Road, Fairview. Thrilled by the inaugural meeting of the Irish Volunteers at the Rotunda (25 November 1913), he was among the first to enlist, as a private in B Coy, 1st Battalion, telling his sister later that it was what he had always hoped for. By early 1914 he was appointed captain of B Coy, drawn from a poor inner-city parish. He pored over books on military tactics and history, and concentrated on the principles of drill and dress. On 26 July 1914 he impressed his superiors with his clever self-possession while in command of B Coy marching to and from Howth as arms were landed and cached; he was made commandant of 1st Battalion by Patrick Pearse (qv) on 10 March 1915. It seems that plans in embryo for the Easter rising were confided to him and his vice-commandant, Piaras Beaslaí (qv); there are clear indications that he had been a junior member of the IRB for some years. At the funeral of Jeremiah O'Donovan Rossa (qv), on 1 August 1915 he assumed charge of the four Dublin Volunteer battalions. Days before the rising he was required to detain Bulmer Hobson (qv) to prevent leakage of information.

He mobilised 1st Bn before noon on Easter Monday, 24 April; at first, to his disappointment, only about 150 of 400 men showed up. The plan to hold streets and buildings from Broadstone railway station to Cabra and to Parnell St. could not be realised. The Four Courts and buildings along Church St. to North King St. were occupied, to the consternation of many local inhabitants, and barricades were bundled together at strategic intersections. For several days shops remained open, and civilians were escorted through the district, some to a working bakery. Fierce resistance by Sean Heuston (qv) in the Mendicity Institution delayed open British attack on Daly's positions until 26 April, after Volunteers captured the Bridewell police station and the Linenhall Barracks. By 27 April battalions of the South Staffordshires and Sherwood Foresters encircled the district. Despite relentless assaults down Church St., supported by an armoured car, British forces were unable to penetrate more than 150 yards between the morning of 28 April and 2 p.m. on 29 April, when Daly received the order from Pearse to surrender. His command was disciplined and concerned for civilian welfare, and neatly anticipated British offensive tactics, and his manner was sober and contained. After standing as a prisoner in teeming rain in front of the Rotunda on Saturday night, he was identified on Sunday morning and sentenced by court martial the following night to be executed. After a visit by three of his sisters he was shot by firing squad at 4 a.m. on Thursday 4 May, and buried in a mass grave at Arbour Hill. He was unmarried.