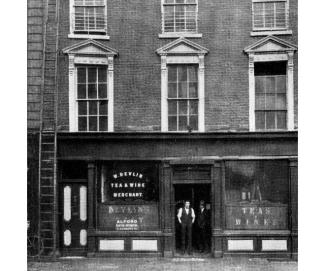 Devlin, Liam (1877–1964), revolutionary, publican and industrialist, was born William Devlin on 18 June 1877 at 59 Waterloo Street, Derry city, the son of Denis Devlin, variously a labourer, clothier and potato dealer, and Ellen Devlin (née McLaughlin). Their first-born child, William, died not long after birth. After the early deaths of two other children, Mary and Denis, William was left as the youngest, with three older siblings – Hugh, John and Margaret. After his schooling, he worked in the local post office and moved to Greenock, Scotland, shortly before 1900, where he worked for a relative. By 1903 he had secured his first public house licence. In June 1907 he married Margaret McDermott in St Mary’s Church, Greenock. Margaret was daughter of Patrick and Anne (née McGonigle) McDermott, who had farmland and a merchant business in Moville, Co. Donegal. Their first child Denis Devlin (qv) was born in Greenock in 1908, followed by Anne (1910), Eileen (1911) and Moya (1913). They moved to Kilmarnock in 1913 where two more children, Maureen (1914) and Patrick (1916) were born, and then to Irvine in 1918, where William Devlin took ownership of the Crown Hotel on High Street; it was there that their seventh child Shiela was born in October 1918.

Devlin had been active in the local business, social and church affairs of Greenock and, while in Scotland, was also involved in Sinn Féin and the Irish Volunteers, being listed in the 5th Battalion, Greenock and Port Glasgow. It is possible that already at this stage he was a member of the Irish Republican Brotherhood (IRB). Devlin, relocated to Dublin in mid-1919 where he bought a large, four-storey Georgian grocery shop and licensed premises at 68 Parnell Street, Dublin, located at the epicentre of the Irish nationalist and independence movement. Within a matter of weeks, after meeting with Maurice Collins, Sean O’Muirthuile and Gearóid O’Sullivan (qv), Devlin made his pub available to Michael Collins (qv), as the general headquarters (GHQ) of Intelligence in the war of independence (1919–21). Collins and members of the Intelligence group and ‘the Squad’ met nightly at the pub, with Collins and many others often staying overnight.

Devlin’s pub was the scene of some of the war’s key moments. Collins waited anxiously there on the morning of 1 November 1920 for news on the hanging of Kevin Barry (qv). He was there too on the morning of 21 November 1920 (Bloody Sunday) when his Squad assassinated thirteen British agents, and later that day when the British forces killed thirteen civilians at a football match in Croke Park and three prisoners in Dublin Castle. In February 1921, having been almost fatally tortured in Arbour Hill prison, it was to Devlin’s pub that Eamon ‘Ned’ Broy (qv) (Collins’s most important agent within Dublin Castle) went, straight after his release, to report to Collins.

Devlin became a central and trusted figure within the revolutionary movement. An officer in GHQ Intelligence as well as being closely associated with the Supreme Council of the IRB, he had personal responsibility for the safe storage and transmission of vital, sensitive documentation being routed to, from and within Dublin on a daily basis. He was also banking large amounts of money on behalf of the Self-Determination Fund and the National Loan. In a glowing tribute Frank Thornton (qv), who had been colonel, GHQ Intelligence, said that ‘one of the best intelligence officers was Liam Devlin himself’ and that he ‘took all the chances that any column man in the country had to face’ (Irish Press, 1 Oct. 1964). After the Treaty, Devlin acted as quartermaster general for a period. In March 1924 a number of high-profile officers of the new Free State Army met in his pub to plan a ‘coup d’état’. This ‘army mutiny’ represented a significant threat to the fledgling state and was put down in the early hours of 19 March.

The last two of the Devlin’s children were born in Dublin: Finola (1920) and Raphael (1925), and in early 1924 the family moved from Parnell Street to ‘Westbury House’, a grand residence in Stillorgan.

As the Free State emerged from the civil war, Devlin turned his attention to a number of commercial and industrial projects. By 1925 he was already a director of the Dublin Glass Bottle Company and had established a construction company with Paul Kossel, a concrete construction innovator, from Bremen, Germany. Despite some objections from trade unions and local representatives to what became labelled as a ‘German company’, Kossel (Ireland) Concrete Construction Company Limited, with Devlin as managing director, built 333 houses (1925–7), on budget and schedule as the final phase of the Marino Garden Suburb. This was Ireland’s finest example of a large public housing scheme, employing the principles of the garden city movement, and one of the first in Europe to do so. The company was liquidated on completion, thus ending Devlin’s involvement in housing construction.

In 1925, having secured ownership of the Moylett Manufacturing Company, a small toffee manufacturing business trading as Blue Badge Toffee (BB Toffee), Devlin launched his new toffee factory located in 81–5 Gloucester Street Lower (now Seán McDermott Street Lower), properties that he had purchased in 1923. Devlin’s company bought the Cleeve’s Toffee factory in Limerick in 1927 from the Dairy Disposal Company (DDC), adding a further range of toffees, over 100 employees and a strong brand name to his armoury. Meanwhile BB Toffee had continued to prosper and by 1929 Devlin employed approximately 200 people in his north inner-city factory. However, the negative economic impact of the economic crash in 1929 probably caused Devlin to sell Cleeve’s Toffee back to the DDC in 1931 at a loss, and also to sell Westbury House that year, moving to 39 Lower Mount Street.

In 1939, not long after the end of the ‘economic war’ with Britain, the confectionery business relocated to Cork Street in the Liberties, Dublin, replacing the BB Toffee brand name with Liam Devlin Sweets. Devlin Sweets partnered with Barratts of London in the mid-1950s. When the business was sold to Urneys in 1960 it had long been recognised as the largest children’s confectionery company in Ireland. Urney’s moved some production to their plant at Tallaght, Co. Dublin, and production at Cork Street finally ceased at the end of that decade. Quite apart from their range of sweet confectionery and chocolate products, all of which were sold across the island, it was their sweet cigarettes, packaged with cigarette cards, that became their best-known product for a generation of Irish children through the 1950s and 1960s.

In 1934, in addition to his sweet confectionery business, Devlin was a founding shareholder and director in L. Jordan Ltd, a new braid manufacturing factory. The company was encouraged by government to locate the factory in Ennis, Co. Clare, and supported with a trade loan, tariff protection and a local authority site. In 1943 it changed its name to Braids Ltd Ennis and established subsidiary companies Ennis Weaving Ltd (1949) and Guaire Fabrics Ltd, Gort (c. 1955). In 1950 Devlin was a founding shareholder and director of Castleguard Textiles, Ardee, Co. Louth, which in 1951 bought Dundalk Linen Company and established Hampton Mills, Balbriggan, and in 1955 established Sligo Spinning Co. Ltd. All these textile companies formed part of Braids Group Ltd of which Devlin remained chairman until the early 1960s. Textile House, Johnson Place, Dublin 2, was built as the group headquarters in 1959, when it employed over a thousand people at its various factories.

Devlin participated over many years in various industry associations, including the Dublin Industrial Development Association, Federation of Saorstát Industries and the Federation of Irish Manufacturers. He had also been a director of the Irish Sugar Company (Comhlucht Siúcra Éireann Teoranta) for many years, a position he held until he was in his eighties. In his spare time, Devlin was an enthusiastic golfer. In 1926, as a gesture for reconciliation between those of pro- and anti-Treaty persuasion, he presented the Michael Collins Cup to the golf society of the Free State Army, a trophy still played for annually.

Liam Devlin died on 30 September 1964 at home in Dublin and was buried with full military honours at Deansgrange cemetery, Co. Dublin. He was survived by his wife Margaret, eight remaining children and twenty-seven grandchildren. Their nine children, apart from Patrick who built a career within the family confectionery business, attended university and had careers in areas such as insurance, architecture, medicine and the diplomatic service. The firstborn, Denis Devlin, was an Irish Modernist poet and diplomat. In 1940 the family moved from Lower Mount Street to ‘The Slopes’, Monkstown, Co. Dublin, which remained the family home until after Margaret Devlin’s death in July 1972.