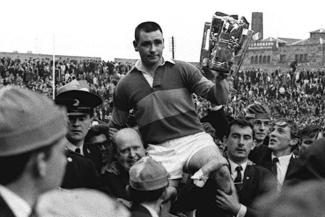 While his national reputation was mainly based on his honours for county and province, Jimmy always prioritised his club – Thurles Sarsfields – and never spared himself when he donned their blue jersey. Undoubtedly the club’s greatest hurler, he played senior hurling for them from 1956 until 1975. He held a record eighteen county medals: four minor (1954–7), two junior (1955–6) and ten senior county championships (1956–9, 1961–5 and 1974), captaining the team in 1964 and 1974; there was also a senior football medal with Thurles Crokes in 1960.

Jimmy was hurling’s supreme artist, with all the skills, temperament, courage and the determination necessary for success. A member of the Tipperary senior team from 1957 until 1973, he was acknowledged throughout the hurling world as a rare and unique talent, and was the top scorer in seven All-Ireland hurling championships (1958, 1960–62, 1964–5, 1967). With a total of eighteen goals and 176 points, Jimmy was Tipperary’s all-time top scorer, a record that stood for more than three decades after his retirement from the game.

Only those that played with or against him or who saw him in action can fully appreciate the magic he brought to the game. A ciotóg (left-handed player), Jimmy was an exponent of pure hurling, relying totally on his superb technical skill; he would stop and deaden a fast ball, hold it a split second on the blade and double it away in one smooth action. His uncanny sense of position and innate ability to read the game had him always that one step ahead, giving him the edge on an opponent. He always showed extreme coolness and courage in the face of the physicality of opponents or when hemmed in by backmen; his deft stickwork shone in tight corners and with a flick of the wrist had the ball on its way. He was, perhaps, the finest sticksman in the game and his ability to swerve or curve a ball with a delicately applied slicing action set him apart.

When greats of the game are discussed, the names of Mick Mackey (qv), Christy Ring (qv) and Jimmy Doyle are mentioned. Doyle greatly admired Ring and this admiration was mutual. Ring had seen both Mackey and Doyle in action and made his judgment, saying, ‘If I had Jimmy Doyle’s hands, I’d never be beaten’ (Ó Donnchú, 2021, 638).

Renowned for manliness, sportsmanship and humility, Jimmy carried his fame with a disarming modesty and was an adornment to the ancient craft of hurling. While the naming of Jimmy Doyle Road in 2012 and the publishing of his autobiography, The boy wonder of hurling (2015), perpetuate his memory, time will not diminish or obscure his legacy. A poetic tribute by Gerard Ryan aptly noted that ‘When hurling men assemble and talk of skill and style / One name will always come to mind, the greatest – Jimmy Doyle’ (King et al., 589).

When not hurling Jimmy continued his father’s trade as a shoemaker in Thurles. In later years he was employed by Mid-Western Health Board as a telephonist at the Hospital of the Assumption in the town. In 1962 he married Kitty Kelly from Castlecomer, Co. Kilkenny, and they had four children: one daughter, Janet, and three sons, Jerry, Walter and Jimmy. He loved all sports and played badminton with Thurles for about ten years, winning several county titles. When he finished playing hurling, he was a successful coach with Portlaoise senior hurling team in 1980, winning four successive Laois county championships. He later coached the Laois county senior hurling team (1985–8).

His unexpected death on 22 June 2015 at his home at 2 Church View, Bohernanave, Thurles, sent shock waves through the town and the wider GAA world. His funeral surpassed all, as Thurles came to a standstill in silent tribute. Former and current hurlers and supporters converged on the town in their thousands to pay tribute and say farewell. For six hours an estimated 12,000 people filed past his remains as they reposed at Thurles Sarsfields Social Centre. Fr Tom Fogarty was chief celebrant at requiem mass at the Church of St Joseph and St Brigid, Bohernanave. He paid a full and fitting tribute to Jimmy, touching on his life on and off the field, and recalled the immense joy that he had given to people everywhere with those wrists that could send a county into ecstasy. Jimmy’s club colleague and friend, Michael Dundon, also delivered a very appropriate eulogy. As the funeral cortege left the church, it was flanked by a guard of honour, headed by GAA president Aogán Ó Fearghaíl and Thurles Sarsfields chairman Michael Maher. The route chosen passed Jimmy’s home, across the Jimmy Doyle Road en route to the Island Crematorium, Ringaskiddy, Co. Cork. Flags flew from many houses and businesses, as young and old lined the route. Unforgettable too was the tribute paid by the people of Cork, who lined the streets of towns and villages waving flags and hurleys and applauding in a never-to-be-forgotten salute to a giant of the game so dear to their hearts.