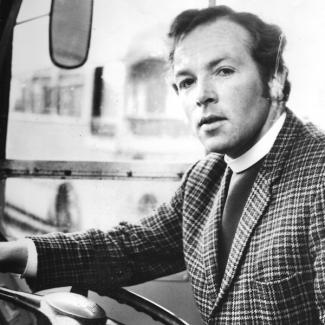 Dunlop, Robert Frederick (1938–2014), baptist minister and writer, was born on 19 June 1938 at the family farm in the townland of Errigal Truagh, near Emyvale, Co. Monaghan, the eldest of at least two boys and two girls born to Henry Dunlop, and his wife Jean (Jeanne) Lyster Dunlop (née Martin). Raised in a small Church of Ireland community that mixed with local presbyterians and methodists, Robert worked on the family farm. In the late 1940s the family moved to Co. Tyrone, and later to Rostrevor, Co. Down, near to his maternal family. Drawn by the enthusiasm of baptists he encountered, Robert was impressed by their strong personal faith and emphasis on the Bible and underwent a significant spiritual awakening in July 1954.

After leaving school he studied at Belfast Bible College and served as a baptist home mission worker in Arklow (1960) and Athlone (1960–63), preaching in the latter at the seventeenth-century Scotch Parade baptist church. In 1964 he was appointed pastor to Brannockstown baptist church, Co. Kildare, where he served for forty-two years. There he met Olive Stacey, a member of the baptist congregation who became a nurse; they married in May 1970 and had two children.

Dunlop served as treasurer (1963) and secretary (1964) of the Association of Southern Baptist Churches, was twice president of the Christian Endeavour Union (1965, 1974) and was active in the YMCA. From 1970 he organised and led annual open-air ‘field services’ around Co. Kildare. In 1972 he adapted a single-decker bus into a ‘churchmobile’ that comprised a pulpit, communion table, foldaway spire, gothic decoration and seating for forty people. He operated the bus for the next twelve years, hosting religious services, Bible study groups and a variety of religious events throughout Leinster. At Brannockstown he established an annual summer camp for children and undertook a range of evangelistic outreach activities. He was a patron of the National Bible Society of Ireland and frequently wrote to regional and national newspapers, and from the 1970s made occasional radio and television appearances. He undertook many visits to overseas baptist congregations and welcomed foreign pastors on return visits. As president of the Baptist Union of Ireland (1982), a loose affiliation of baptist churches who theologically eschew ecclesiastical organisation, Dunlop became something of a national religious figure. His participation at various public or national events occasionally chaffed with some fellow baptist pastors who instinctively resented notions of elevated leadership in their community, some even disputing the presence of a wider baptist ‘church’ that required representation.

Cautiously ecumenical, Dunlop was well versed in the theology of other Christian denominations and established friendly relationships with a range of religious leaders in Kildare and elsewhere, often preaching in other Christian churches. Strongly opposed to religious bigotry, he urged the DUP leader Ian Paisley (qv) to ‘give up the double-think and either be a politician or a preacher’ (Irish Times, 23 Mar. 1981). A strong proponent of religious pluralism, Dunlop often lamented the psychological estrangement that twentieth-century Irish catholicism had generated in protestants. During the 1986 divorce referendum he, along with other protestants who supported the introduction of legal divorce in limited circumstances, urged the government to implement the formal separation of church and state in civil marriage ceremonies. He later characterised the impact of the 1907 catholic Ne Temere decree on protestant denominations as a ‘form of spiritual euthanasia’ (Irish Times, 2 Dec. 1997).

From 1986 onwards he attended the annual National Day of Commemoration for all Irish people who had died in past wars or on UN peacekeeping missions; the main ceremony was an interdenominational national prayer service held in the Royal Hospital, Kilmainham. He publicly welcomed the new spirit of religious pluralism that began to emerge in the late 1980s and participated in the Irish Lausanne Council for Evangelisation in the mid-1990s. Prior to the investiture on 3 December 1990 of President Mary Robinson, he also participated in the interdenominational prayer service at Dublin Castle and attended subsequent national religious meetings the president hosted annually at Áras an Uachtaráin. A strong proponent of peace in Northern Ireland, he sought to spread the Christian message as far as possible and urged baptists and evangelicals to reach out to new communities.

From the late 1990s, with Olive and clergy from other Christian denominations, Dunlop led religious pilgrimages to Israel and various parts of eastern Europe. He retired in 2004 and moved to a small cottage in Brannockstown. Conversant with international religious and theological developments, he wrote for The Furrow, the Journal of the Irish Baptist Historical Society and the Irish Theological Quarterly; he also continued to produce occasional columns for the Irish Times and the Kildare Nationalist and Leinster Times. His interest in Brannockstown led him to research the village’s founders, the family of John David La Touche (qv) of Harristown House, who had established the baptist community there. This resulted in the publication of Plantation of renown (1982), Waters under the bridge: the saga of the La Touches of Harristown (1989), and The spiritual journey of Rose La Touche, 1849–1875: agony and integrity (2002). He also wrote poetry, which sometimes appeared in the Church of Ireland Gazette and other periodicals, and was collected in Markers of hope (1992), Pointers for peace (1997) and Anchors for life (2004). To celebrate the arrival of the second millennium he wrote a new hymn ‘God of all the years’, released on a CD he recorded with Brannockstown church choir, Sounds of praise (2000). His interest in Irish and Baptist history led him to undertake historical research as a mature student in TCD, and he was involved in establishing the Irish Baptist Historical Society. He contributed a chapter assessing the impact of the Irish famine on religious beliefs to Fearful realities: new perspectives on the famine (1996), and another, assessing the historical experience of Irish religious minorities, to Religion in Ireland (1999). He also edited the collection Evangelicals in Ireland: an introduction (2004).

Dunlop died on 15 February 2014 at his home, La Touche Cottage, Brannockstown. After a funeral service at St Bridget’s Cathedral, Kildare, he was buried at Brannockstown Baptist Church.