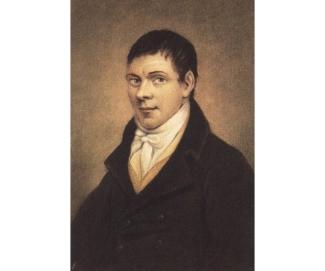 Dwyer, Michael (1772–1825), United Irishman, was born in Camara, west Wicklow, the eldest son of John Dwyer, a tenant farmer, and his wife, Mary (née Byrne). He had three brothers and three sisters. In 1784 the Dwyers moved to a small sheep farm at Eadestown in the remote and mountainous Glen of Imaal. Michael attended school at Ballyhubbock, where the teacher, Peter Burr, inspired him with a strong sense of patriotism. Dwyer worked as an ostler for a family named Morris, apparently until the early months of 1797, when the revolutionary Society of United Irishmen took deep root in his native barony of Talbotstown. Dwyer joined the society, perhaps under the influence of his close relative, John Dwyer of Seskin, who was one of the leading republicans in west Wicklow and among the first prisoners summarily executed in Dunlavin when the rebellion erupted on 23 May 1798.

Michael Dwyer displayed characteristic militancy and survival skills throughout the rebellion and went to north Wexford within days of its outbreak. He joined a corps of displaced Wicklowmen at Limerick Hill camp and Mountpleasant, and marched with the ‘division’ commanded by William Byrne (qv) of Ballymanus to the major battle of Arklow on 9 June. On 24 June he was appointed captain of a unit which he led the following day in the second battle of Hacketstown. They fought again at the successful ambush at Ballyellis five days later, where Dwyer killed at least one dragoon of the hated ‘Ancient Britons’. Dissension within the command at this time clearly reinforced his independence, as he refused to participate in the ‘midlands campaign’ of July 1798. Instead, with a Wexford associate, Miles Byrne (qv) of Monaseed, he took responsibility for protecting the rebel wounded in the Glenmalure valley. Both men subsequently gravitated towards the dynamic Wicklow leader Joseph Holt (qv), whose followers spurned the conditional pardons offered by the authorities in July–August 1798.

Dwyer's actions alongside Holt and as an independent agent in Talbotstown marked him as a guerrilla leader of considerable talent. William Hume (1742–98), MP for Co. Wicklow (1790–98), was killed near Humewood on 8 October by Dwyer's associates who burned numerous yeoman properties around Rathdrum the following week. On 16 October 1798, the night of the Rathdrum raid, Dwyer married Mary Doyle of Knockandarragh, with whom he had six children. Holt's belated acceptance of negotiated terms in November 1798 left Dwyer as the leader of the most disciplined and effective faction in Wicklow. His later actions, though deadly, were typically defensive in character and generally confined to the Imaal and Glenmalure area, where the core members of the United Irishmen lived. Five soldiers and yeomen were killed on 8 December 1798 to avenge a fallen comrade and four state witnesses were assassinated in 1799–1800 to disrupt courts martial. Ruthlessness of this order proved effective against betrayal. The exception to the success of Dwyer's actions was a famous night skirmish at Derrynamuck on 15 February 1799, when he narrowly escaped being killed by the Glengarry highlanders.

Along with his cousins Arthur Devlin and Hugh ‘Vesty’ Byrne, Dwyer joined the conspiracy headed by Robert Emmet (qv) in 1802–3 at the behest of James Hope (qv). A breakdown in communications meant that he failed to participate in the rising of 23 July 1803. Nevertheless, the counterinsurgency provoked by Emmet brought pressure to bear on Dwyer's extended family, most of whom were interned and threatened with transportation. Such pressure influenced Dwyer's acceptance of comparatively generous terms of exile offered to him on 14 December 1803 by William Hoare Hume (1772–1815), who had succeeded his father as MP for Co. Wicklow (1799–1815). Following confinement in Kilmainham prison, Dwyer, Devlin, Byrne, and others were deported to New South Wales on the Tellicherry.

They reached Sydney on 14 February 1806 and Dwyer received 100 acres of land in Cabramatta. He lived there peaceably with his wife and two of their children until February 1807, when he was arrested on suspicion of sedition. Although he was acquitted by a jury on 11 May 1807, Dwyer was sent to Norfolk Island at the insistence of Governor William Bligh. This injustice contributed to the overthrow of Bligh by officers of the New South Wales corps and Dwyer's eventual return to Cabramatta in 1809 after an enforced stay in Tasmania. In August 1810 Dwyer was appointed a constable in the George's River area near Sydney and he received various minor administrative posts during the tenure of the progressive Governor Lachlan Macquarie. Within ten years Dwyer was chief constable of Liverpool, near Sydney, and was farming a 610-acre property. He was also proprietor of the Harrow Inn (named in honour of the Wexford flashpoint of 1798), and a prominent advocate of catholic rights in the colony.

Dwyer's life took a sharp downward turn in October 1820 when he was dismissed from the constabulary on disciplinary grounds. Two unrelated court cases ensued, one concerning alleged property offences and another centred on the repayment of a large loan of almost £2,000. The cumulative impact of these reverses bankrupted Dwyer and led to his being imprisoned as a debtor in May 1825. This short spell in a Sydney jail proved fatal: he contracted dysentery and died 23 August 1825 at his home at Liverpool. Although he was first buried at Liverpool, his grandson Dean John Dwyer of St Mary's Cathedral had the body reinterred at Devonshire Street cemetery, Sydney, in 1878; in May 1898 his remains were moved to a tomb in Waverley cemetery, Sydney, along with those of his widow who died in 1861. The final burial was the highlight of the centenary celebrations in Australia of the 1798 rebellion and one of the largest public events of its kind in the history of Sydney. The imposing Patriot's Monument was built over the Dwyer tomb in April 1900 and remains the focal point of Irish-Australian republicanism.