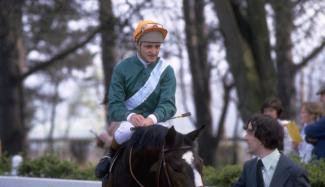 Eddery, Patrick (Pat) James John (1952–2015), flat racing jockey and racehorse trainer, was born on 18 March 1952 in Newbridge, Co. Kildare, near the Curragh Racecourse. He was the fifth of twelve children of Jimmy Eddery, a jockey who was Irish Flat Champion in 1954 and 1955, and who rode Panaslipper to win the Irish Derby in 1955. His mother Josephine was the daughter of Jack Moylan, also a jockey. His brother Paul would go on to become a successful jockey too. Pat initially attended the Patrician Brothers' primary school in Newbridge, later enrolling in Oatlands primary school in Stillorgan when the family moved to Blackrock, Co. Dublin.

Devoted from his earliest years to riding horses, Eddery had little interest in school. He began his career on his fourteenth birthday as an apprentice jockey in Ireland (1966–7) with the stable of Seamus McGrath. In 1967, he moved to England where he was apprenticed to Frenchie Nicholson until 1972. After riding for more than a season without success, he recorded his first win on 24 April 1969 at Epsom Downs racecourse on a horse named Alvaro, trained by Major Michael Pope. Alvaro provided Eddery with six wins in succession during the 1969 season.

He finished the 1971 season as champion apprentice with seventy-one winners, and in 1972 had his first Derby ride, the 50–1 chance Pentland Firth, who finished third behind Roberto and Rheingold. In 1972 he also had his first victory in a Group 1 race via Erimo Hawk, when awarded the Gold Cup at Ascot following the disqualification of Rock Roi for interference.

Eddery rode for the Newmarket trainer Geoffrey Barling in 1972 before becoming the stable jockey for leading trainer, Peter Walwyn, later that year. For Walwyn, he won his first two English classic races on Polygamy (Oaks) and Grundy (Derby) and was Champion Jockey in four consecutive seasons from 1974 to 1977. While under retainer with Walwyn, he clinched the first of these titles when just twenty-two years old, a record in the post-war era. In 1975, after winning the Irish Derby on Grundy, he rode the horse to a hard-fought victory over Bustino in the King George VI and Queen Elizabeth II Diamond Stakes at Ascot in what was described by many at the time as ‘the race of the century’.

Eddery remained as stable jockey to Walwyn for eight years, before joining the Ballydoyle Stables of legendary Irish trainer Vincent O’Brien (qv), for whom he rode a string of big-race winners, including the brilliant Golden Fleece, owned by Robert Sangster, in the 1982 Derby.

The O’Brien–Eddery combination experienced controversial defeat in the Derby two years later, when Eddery rode then unbeaten 2,000 Guineas-winner El Gran Senor and seemed to be cruising to victory in the final furlong, only to be caught on the line and beaten by a short head by Secreto, trained by O’Brien’s son David. Eddery later admitted that he should have won the race, but when the horses in front of him fell away early in the straight he was left in front too soon and was unable to repel Secreto’s late challenge. He later won the Irish Derby on El Gran Senor, beating the subsequent Prix de L’Arc de Triomphe winner, Rainbow Quest. During 1984, Eddery also partnered the O’Brien-trained and subsequent outstanding stallion, Sadler’s Wells, to two of his three Group 1 successes.

The 1980s represented the pinnacle of Eddery’s career and included victories in the 1983 Arlington Million in Chicago on Tolomeo, the 1985 Breeders’ Cup Turf at Aqueduct, New York, on Pebbles, and the 1986 Japan Cup on Jupiter Island; the latter two horses being trained by Clive Brittain. Eddery also had four victories in the Prix de l’Arc de Triomphe: on Detroit in 1980, Rainbow Quest in 1985, the great Dancing Brave, on whom he also won the King George VI and Queen Elizabeth II Diamond Stakes in 1986, and Trempolino in 1987. The field for the 1986 ‘Arc’ was extremely strong and Dancing Brave’s late winning run a thrilling spectacle. The race was voted ‘the greatest ever horserace’ in a poll conducted by the Racing Post in 2022 – Grundy’s 1975 ‘King George’ finished a close third.

Rainbow Quest and Dancing Brave were both owned by the Saudi Prince Khalid Abdullah, whose Juddmonte Farms was by then one of the world’s largest racing and breeding organisations. In 1987, Eddery became Abdullah’s retained jockey. Highlights of their association, which lasted until 1994, included Quest for Fame winning the 1990 Derby, and Zafonic, winner of the 1993 2,000 Guineas.

Meanwhile, Eddery continued to win the jockeys’ championships, a task made easier by being retained by Juddmonte in England rather than commuting regularly to Ireland to ride for Vincent O’Brien. His highest seasonal total of wins was 209 in 1990, which was the first time a jockey had exceeded 200 since Sir Gordon Richards in 1952. His epic battle for the championship in 1987 with American Steve Cauthen was particularly intense, with Cauthen securing the title with 197 winners and Eddery coming close at 195. The title would have been shared at 196 winners apiece but for a successful objection by the rider of the third horse to the winner after the last definitive race between Eddery and Cauthen when they finished first and second, respectively. In 1988, Eddery regained the title with 183 winners from just over 480 rides; a remarkable strike rate of over thirty-eight per cent. He won the championship for the eleventh and final time in 1996. His final classic win was on Silver Patriarch in the St Leger of 1997.

Eddery rode major winners outside Europe and the US, including Jupiter Island in the 1986 Japan Cup, and French Glory in the Canadian International Stakes. He teamed up with Lester Piggott, Joe Mercer and French jockeys Freddie Head and Yves Saint-Martin to take part in a series of challenge races under the Ritz Club Challenge Trophy at Singapore and other Asian cities starting in 1983 for several years. Eddery's overall total of winners in the UK, Ireland, mainland Europe and overseas, exceeded 6,000. Although fiercely competitive on the racetrack, he was popular with fellow jockeys, trainers, owners and racegoers, who responded to his good-natured personality, courtesy and sense of humour.

Eddery had a distinctive riding style that was not classically elegant but undoubtedly effective and strong in a finish. He rode a number of truly outstanding racehorses including Dancing Brave, El Gran Senor and Pebbles, but maintained that the brilliant and undefeated Derby winner, Golden Fleece, was the greatest of all the horses he partnered throughout his career.

Eddery continued to ride into his fifties, finally retiring in 2003. He was appointed an Honorary Order of the British Empire (OBE) in 2005. He set up an owners’ syndication business and took out a training licence but had difficulty adjusting to life out of the saddle and became increasingly dependent upon alcohol. His training career met with limited success, though he did train Hearts of Fire to win the Group 1 Gran Criterium of Italy.

Pat Eddery married Carolyn Mercer in November 1978. Carolyn was the daughter of flat jockey Manny Mercer, niece of jockey Joe Mercer, and granddaughter of jockey Harry Wragg. They had two daughters, Nichola and Natasha, and a son Harry. Eddery had a son from an extramarital relationship, Toby Atkinson, who also became a jockey. The marriage with Carolyn broke down in 2008 and the couple divorced in 2009.

Shortly after his marriage broke down, Eddery began living with Emma Owen, a former stable employee, at his 100-acre Musk Hill stud farm near Aylesbury, Buckinghamshire. He became progressively estranged from his children due to his continued alcoholism.

Pat Eddery died of a heart attack on 10 November 2015, aged sixty-three. He left his £1.3 million estate to Emma Owen. His funeral took place on 8 December 2015 and his remains were cremated at Oxford. Throughout his career, Eddery rode the winners of 4,632 British flat races, a figure exceeded only by Sir Gordon Richards and was UK Champion Jockey on eleven occasions and Irish Champion Jockey once. A plaque in his honour was unveiled by his children Nichola, Natasha and Harry at Ascot Racecourse in 2016, where Eddery had been champion jockey at the Royal meeting on six occasions. He was inducted into the Qipco British Champions Series Hall of Fame in 2021, the second jockey after Lester Piggott to be so honoured.