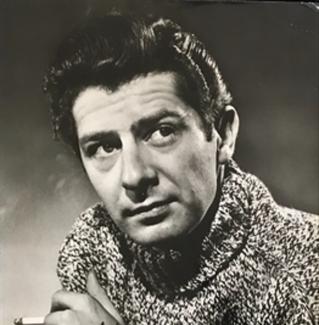 Ellis, James (‘Jimmy’) (1931–2014), actor and theatre director, was born on 15 March 1931 in his aunt’s house at 13 Gawn Street, Belfast, the younger of two children and only son of James Ellis senior, a sheet-metal worker at Harland & Wolff shipyard, and his mother Matilda (‘Tilly’), a mill worker. The family briefly lived in Birkenhead near Liverpool when Ellis’s father was worked at Cammel Laird’s shipyard. They returned to Belfast in 1939 to live at 30 Park Avenue. To supplement the family income, they took in lodgers, some of whom Ellis recalled in a poetry anthology, ‘Portrait of a house’, that remained unpublished until produced as a stage play by the Blunt Fringe Theatre Company in 2018. From September 1939 Ellis attended Strand Public Elementary School in Sydenham and in 1943 he won a city scholarship to attend ‘Methody’ (Methodist College Belfast). The school gave him his first taste for acting when he took part in the dramatic society’s performance of ‘The Barretts of Wimpole Street’ in 1949.

At the age of eighteen Ellis won a scholarship to QUB where he read English literature and French. He proved a poor student but gained acting experience with Queen’s Dramatic Society where he took part in their production of George Bernard Shaw’s (qv) ‘Candida’. This was followed by some work with Hubert Wilmot’s recently opened Arts Theatre where he was paid £3 per week. His acting commitments took precedence over his studies and in 1951 he lost his QUB scholarship. This, however, opened the door for him to apply for and receive the Tyrone Guthrie (qv) scholarship, enabling him to attend the Bristol Old Vic school where he learned stage management and directed a performance of T. S. Eliot’s ‘The cocktail party’.

On his return to Belfast, he appeared in Tennessee Williams’s ‘The glass menagerie’, directed by Hubert Wilmot for which he was paid £11 per week. During the production, he met Elizabeth (‘Betty’) Hogg, whom he later married. On rejoining the Arts Theatre’s regular company, Ellis was offered a wage of £2 per week by Wilmot, who claimed he would have to re-teach him everything he knew. An outraged Ellis approached Harold Goldblatt (qv), director of the Ulster Group Theatre, where he was warmly received and offered £3 per week with the additional assurance there would be no menial backstage tasks. Ellis accepted, and from 1952 regularly played the male lead role in Group Theatre plays such as ‘April in Assagh’ (1954), ‘Is the priest at home?’ (1954), ‘The diary of Anne Frank’ (1957), and his most significant role as Christy Mahon in J. M. Synge’s (qv) ‘The playboy of the western world’ (1957). Although there were lulls in his fortunes – at one stage he and Betty moved to London where Ellis sold ladies’ shoes in Selfridges department store – by 1959 he was artistic director of the Group Theatre and in a position to make one of the most crucial decisions of his career. In his memoir (published posthumously in 2015), he recalled being stopped on the street early in March 1959 by the playwright Samuel Thompson (qv) who thrust a manuscript at him with the words: ‘I have a play here you won’t touch with a bargepole’ (Troubles, 25). That evening Ellis gave the play to his father, who was deeply impressed by its gritty realism and insisted that his son do it. The play, ‘Over the bridge’, based on Thompson’s experience of sectarian division in Harland & Wolff, was however considered too inflammatory by the Group Theatre’s board of directors, who believed it could lead to civil unrest, and they refused to stage it. In protest, Ellis offered his resignation but agreed to stay on to complete the theatre’s dual programme with Bangor Borough Council until September – he was upset at later suggestions that he and the cast walked out immediately en masse. Once his commitments were discharged, he and most of the production team left the Group Theatre to form Ulster Bridge Productions. Ellis approached Frank Reynolds, manager of the Belfast Empire Theatre in Victoria Square, and he agreed to stage it. The play opened on 26 January 1960, received glowing reviews, and played to an estimated 42,000 people during its six-week run.

Despite the success of ‘Over the bridge’, Ellis subsequently found it hard to get work in Belfast. In 1961 he again moved to London, where he was embroiled in controversy when he played the part of Dandy Jordan in BBC television’s 1961 production of Stewart Love’s Randy Dandy – a play so sexually charged it was deemed ‘unsuitable for people of a nervous disposition’ by the continuity presenter when it aired on 14 September. His performance was well received, however, and led to his big break into television. One of the play’s directors was working on a new police drama, Z-Cars, and when Donal Donnelly (qv) turned down the part of ‘PC McGinty’, the director suggested that Ellis might be suitable. Ellis, who readily accepted the offer, was quick to remind the producers of the well-known traditional song ‘Paddy McGinty’s goat’ and suggested a name-change. He also refused to abandon his Belfast accent, lending his character a much-vaunted authenticity. The newly named PC Bert Lynch went on to become an enduring figure in British television – during its run from 1962 to 1978, Ellis was the only cast member to appear in all 627 episodes and, at its peak, Z-Cars attracted eighteen million viewers, including Queen Elizabeth.

Despite professional success, Ellis faced mounting personal problems during that period. He and Betty Hogg divorced in 1967, and in 1974 he appeared in the London bankruptcy court with debts of more than £12,000 in unpaid income tax. He also faced career uncertainty in 1978 with the end of Z-Cars, owing to his close association with the character of Bert Lynch. However, that changed when he appeared in Graham Reid’s BBC trilogy of ‘Billy’ plays, Too late to talk to Billy (1982), A matter of choice for Billy (1983) and A coming to terms for Billy (1984). The plays were widely praised for their authentic portrayal of the Belfast protestant working-class, and for bringing this group to the attention of a cross-channel audience. Ellis played Norman Martin, the father of the young Billy of the title (played by Kenneth Branagh), a heavy drinker and hard, violent man who had a stormy relationship with his son. It was a part far removed from the affable Bert Lynch, and opened Ellis’s way to more varied and demanding roles.

From the late 1980s, he appeared regularly in popular television series such as Doctor Who (1989), Nightingales (1990–93), In sickness and in health (1992) and Ballykissangel (1998–9). He also had cameos in series such as Boys from the blackstuff, Only fools and horses, The Bill, Casualty and Lovejoy. His films roles included appearances in No surrender (1985), Priest (1994) and Resurrection man (1998). Outside of acting he had a fascination with sixteenth-century French poet Pierre de Ronsard, whose work he had been introduced to by one of his masters in ‘Methody’. From the early 1970s he began translating de Ronsard’s poetry and in 2009 BBC Radio 4 broadcast a series of five of his translations, adapted to Irish settings. He made several visits to de Ronsard’s birthplace and was made an honorary member of the Ronsard Society in France. In addition, he wrote his own verse – Domestic flight was published in 1998 – and a book of short stories entitled Home and away (2001). In 2001 he was the subject of the Thames Television programme This is your life when surprised during rehearsals for ‘Playboy of the western world’ at the National Theatre in London on the silver wedding anniversary of his marriage to his second wife, Robina. Other recognition included the award of an honorary doctorate in July 2008 by QUB as part of its centenary celebrations and a lifetime achievement award by the Belfast Film Festival in 2012.

Later in life Ellis suffered great personal tragedy when predeceased by his two sons from his first marriage: Adam was murdered in London in 1988 and Hugo, an actor and director, died by suicide in 2011. James Ellis died on 8 March 2014 in Lincoln, England. The funeral service was held in St Mark’s Church, Dundela, East Belfast, and he was interred in Castlereagh presbyterian churchyard. His headstone is engraved with two lines from one of his own poems: ‘The hills of Antrim etched upon my heart. For truth to tell, I never really left’ (Ellis, ‘Over the bridge’). Among the many who attended his funeral were fellow actors and friends James Nesbitt, Adrian Dunbar and Kenneth Branagh, all of whom paid tribute to him as an inspirational figure. Nesbitt noted that actors in Northern Ireland ‘looked at Jimmy Ellis and said, “if he can do it, we can do it”’ (Independent, 11 Mar. 2014). In March 2017 the James Ellis Bridge between C. S. Lewis Square and Victoria Park was named in his honour, and plaques were erected at his family home on Park Avenue and at the two schools he attended. In 2019 ‘Over the bridge’ was staged at the Linen Hall Library, Belfast, to commemorate sixty years since Ellis first brought it to a local audience, and in March 2021 there were a series of online events to commemorate what would have been his ninetieth birthday. His archive is held by National Museums Northern Ireland.