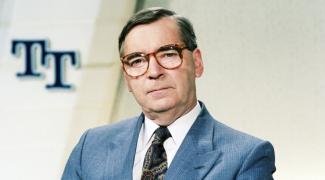 Brian Farrell on the set of 'Today Tonight'
Copyright
Courtesy of RTÉ Archives. All rights reserved

Farrell, Brian (1929–2014) broadcaster and academic, was born Bernard Brendan Farrell on 9 January 1929 at 16 Lowe Street, Miles Platting, Manchester, England. He was the fourth of five children of Francis (Frank) Farrell, a railway porter from Glasgow (whose family were from Wicklow), and Teresa (Treasa) Farrell (née McDonagh), originally from Sligo. On the outbreak of war in 1939, his mother took him to her sister, Agnes Stokes, who with her husband Nick ran a small creamery shop at 13 Little Mary Street off Capel Street in Dublin. The ten-year old Farrell was left in the care of his aunt and uncle for the duration of the war.

He was educated by the Christian Brothers, first at Strand Street CBS and then at Coláiste Mhuire in Parnell Square. With no Irish, he was in the unusual position of having to learn the language through Latin. After graduating in 1947, he spent two years at the Salesian College Novitiate in Ballinakill, Co. Laois. While he decided the priesthood was not for him, he later credited his time with the Salesians with unlocking his intellectual capacity. He retained a deep religious attachment throughout his life.

Returning to Dublin, he worked as a commercial traveller and in 1950 began night courses in UCD. He switched to a full-time BA in history, graduating with first-class honours in 1953. He spent the 1954–5 academic year in Harvard on a Fulbright Scholarship, working towards the MA he was awarded in 1956. While in UCD, Farrell was involved in the Drama Society (DramSoc), where fellow student Marie-Therese Dillon was wardrobe mistress. Vienna-born, she was the daughter of Marie Dillon (née Benninger) and Dr Theo Dillon, who had been professor of pharmacology in UCD and was the son of John Dillon (qv), the last leader of the Irish parliamentary party. The couple were married in Cambridge, Massachusetts, on Easter Monday, 11 April 1955 while Farrell was studying in Harvard. The Manchester Farrells were strongly republican and affected surprise when their son brought John Dillon’s grand-daughter home to meet them. An accomplished dressmaker, Marie-Therese Farrell chose Brian’s clothes, as he was colour-blind, and suggested the bow-ties that became his television trademark. They had eight children: Naomi, Bernard, Miriam, David, Rachel, Theo and Brian; and Jeanne-Marie, who died in infancy. The family lived at Trimleston Gardens in Booterstown, and later Frankfort Park in Dundrum. Family pastimes included excursions to the Dublin Mountains to dam streams and summer holidays in Clare. For three of those summers, Marie-Therese opened a restaurant in their holiday home in Killard; the local post-mistress took bookings, while Brian Farrell, by then a familiar face to most Irish people from television, was the wine waiter.

After his marriage, Farrell planned to work as a supply teacher in England while saving money to emigrate permanently to the United States. However, in July 1955 he was offered a job on the administrative staff in UCD. The offer came from UCD’s president, Michael Tierney (qv), probably at the suggestion of Marie-Therese’s uncle, the Celtic scholar Myles Dillon (qv). Farrell became director of extra-mural studies and also, in 1963, assistant to the registrar. He greatly expanded the extramural programme, which had been rigid and under-subscribed, increasing flexibility, extending lectures to centres around the country and expanding enrolment to 2,000 students. Although his role was an administrative one, he also lectured – in October 1958, the Evening Herald reported that he had begun a series of ten lectures on ‘The frontier in American history’ – and it was clear that his real love was teaching.

His chance came in 1966, when politics lecturer John Henry Whyte (qv) resigned his position, after being told by the head of the department, Fr Conor Martin, to stop his research into church–state relations in Ireland. (Martin was under pressure from Archbishop John Charles McQuaid (qv), who was not impressed by an academic investigating such matters). Farrell was appointed lecturer in the Department of Politics in UCD in October 1966, and would teach there until his retirement twenty-eight years later. Colleagues noted his enthusiasm for delivering each lecture as a performance, ‘a drama to be enacted … with enthusiasm and passion’, perhaps harking back to his days in DramSoc, or as a paid extra at the Gate Theatre (Manning, 3).

His other career, as a journalist and broadcaster, began with articles for the Irish Independent and book reviews and editorials for the Irish Press. He first appeared on radio as a contributor to the election results programme in March 1957 and would go on to participate in the coverage of every election from then until 2002, contributing to the reporting of the first televised election in 1965 and anchoring the television coverage of every election from 1973 to 2002. His first regular presenting job was on the Radio Éireann current affairs programme Round table on world affairs in November 1958, followed by Newspoint in April 1960. Television broadcasting in the Republic of Ireland began on New Year’s Eve, 1961, and Farrell was involved in the first current affairs programmes on Telefís Éireann, Broadsheet, and its successor Newsbeat, from the very start in January 1962. Subsequently, he presented successive flagship current affairs programmes on RTÉ television: 7 days (1967–76), The politics programme (1976–8), Frontline (1978–80), Today tonight (1980–92) and finally Prime time (1993–2000).

When Conor Martin died in September 1980, Farrell took over as acting head of the UCD Department of Politics for three years, and was seen by many as the obvious choice to replace Martin on a permanent basis. However, the job went to J. H. Whyte. Some of Farrell’s supporters thought the decision was due to ‘academic disapproval of his success as a television presenter’ (Irish Times, 11 Nov. 2014). This may have been a factor, though Farrell had always been careful to secure the approval of his UCD superiors before accepting external work. In any event, he made no complaint, in public or in private, and in January 1985 was appointed associate professor of government and political science – a job which left him free of administrative duties. This provided more time for the research and writing that many would see as his most enduring contribution. There had been little academic writing on Irish politics up to this point, largely because the scars of the civil war made the subject particularly sensitive. In writing the history of the state’s first half century, he had the advantage of having access, on and off the record, to many of the principal participants. He added to the insights this provided with careful reading of the (sparse) available documents and of public speeches, particularly those in the dáil.

His first book, Chairman or chief? (1971), was a ground-breaking and still revealing study of the role of taoiseach and of the relationship of that office to the cabinet and the dáil. The founding of Dáil Éireann, also published in 1971, looked at the parliamentary side of the independence struggle, an aspect neglected up to that point and one that was central to his belief that the progress of Irish nationalism towards self-government was inherently democratic. He also wrote Seán Lemass (1983), a seminal biography of a politician he greatly admired, as well as editing five more collections focusing on the parliamentary tradition, elections, communications and the constitution. Adding to this major contribution to the development of political science in Ireland were more than forty substantial essays and journal articles, dealing with topics as varied as the socio-economic background of TDs, the role of the media in election campaigns, coalitions, government formation, and ministerial selection. In his writing, as in his academic career and his broadcasting, he was able, as former RTÉ colleague President Mary McAleese observed, ‘to cross boundaries of discipline, subject and institution and to seamlessly bring insights from one of his fields of expertise to bear on another’ (Remarks at the presentation of the festshrift to Brian Farrell, 27 May 2004).

His voice was ever-present on the coverage of important state occasions, starting with the visit to Ireland of President John F. Kennedy in 1963. Such was his stature within RTÉ that in job interviews for producers, candidates were reputedly asked what was the very first thing they should do if a major political crisis erupted, or a figure of international importance died. The correct answer was to phone Brian Farrell at home.

His friend and colleague Maurice Manning, himself a politician, recalled that his ‘sense of authority on air was total. He was aggressive and terrier-like, especially when faced with prevarication, evasion or spin. He was rude on occasions, but usually only when such was needed to get a straight answer’ (Manning, 2). For some politicians, a grilling by Farrell was a daunting rite of passage. On the day he was elected leader of the Labour Party, Dick Spring spent two hours studying economics, about which he admitted knowing little, before ‘plunging in at the deep end’ with his first interview with Farrell (who in the end asked him all about politics rather than economics) (Collins, Spring, 96).

Farrell also moderated an Irish television first – the live debate between outgoing Taoiseach Garret FitzGerald (qv) and Fianna Fáil leader Charles Haughey (qv) two days before polling in the February 1982 general election. The debate was widely judged to have been a draw, with FitzGerald good on detail, while Haughey was more confident and forceful. Though ‘the tone was courteous and the atmosphere was only slightly tinged with tension’, at one point, FitzGerald asked Farrell (a personal friend) to stop interrupting him, as his debate was with Haughey (Irish Times, 17 Feb. 1982). Farrell was in the chair again for their rematch the following November, which again was deemed a draw, though with FitzGerald putting in a better performance second time around. After the lifting of the Section 31 prohibition on interviews with members and affiliates of paramilitary organisations, Farrell beat off stiff competition within RTÉ to land the first major television interview with Sinn Féin president Gerry Adams in January 1994, which was broadcast on his Sunday night interview programme, Farrell.

While the glowering Farrell of the television studio could be an unsettling sight for politicians, viewers never had any doubt about whose side he was on, and colleagues – whether in RTÉ or UCD – knew a different side of him: kind, generous, good company, always ready with a word of advice or support, and always wearing his vast knowledge lightly. On his retirement from UCD in 1994, he became the first director general of the Institute of European Affairs, a post he held until 1996. He was appointed chair of the Arts Council in June 1998 but resigned in February 2000, having developed Parkinson’s disease, which was to have an increasingly debilitating effect. He retired from full-time broadcasting in May 2000, at the age of seventy-one.

In April 2003 he was awarded an honorary DL by the NUI. Dr Caroline Hussey, registrar of UCD, said in her introductory address on that occasion that ‘there is a seamlessness in all Brian’s enterprises, his writings, lectures or broadcasts that is a measure of his integrity as a scholar. The same energy, enthusiasm and erudition inform a tutorial to evening students as an interview with Ronald Reagan.’

Brian Farrell died on 10 November 2014 in Belmont Nursing Home, Dublin, aged eighty-five. After funeral mass in the Church of the Holy Cross, Dundrum, his remains were cremated at Mount Jerome cemetery in Harold’s Cross, Dublin. A number of documents relating to his research for Chairman or chief?, and to objections raised by Sean MacEntee (qv) to the book, are held in UCD Archives. A festschrift, Dissecting Irish politics (2004) includes a list of his publications. Two of his children followed him into academia: David Farrell is professor of politics and international relations at UCD, while Theo Farrell is deputy vice-chancellor of the University of Wollongong, Australia.