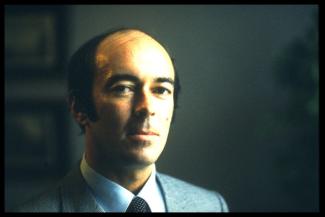 Farrell, Edmund (‘Ed’) Anthony (1946–2014), businessman, was born on 20 September 1946 in Lower Baggot Street, Dublin, the elder son of two sons and seven daughters of Edmund Farrell (qv), a businessman of Booterstown, Co. Dublin, and his wife Josie (née King). In 1955 the senior Edmund Farrell became managing director of a small building society, soon renamed the Irish Permanent, which he turned into a financial powerhouse. Young Edmund grew up latterly in a mansion on Mount Merrion Avenue, Blackrock, Co. Dublin, and attended Blackrock College before studying medicine in UCD. Qualifying as a doctor in 1971, he interned at the Jervis Street and Mater hospitals but abandoned his medical career after temporarily developing an ailment that effected his balance. By then he had a South African-born wife Zorah, with whom he had two daughters and a son.

He joined the Irish Permanent management in 1972 and was still learning the business when his father died in 1975. In line with his father’s wishes, the board elevated Edmund, aged twenty-eight, in his stead. His hands-off approach suited a well-running Irish Permanent administration weary of his father’s micromanagement. Dynastic continuity also suited a board composed of his father’s cronies, mostly outside directors who made big margins off providing the Irish Permanent with advertising, legal, architectural and property services. The members (deposit holders) of the Irish Permanent had no say, the principle of one-member, one-vote at the annual general meetings (‘mutuality’) having been undermined through the deployment of the proxy votes of a diffuse, largely indifferent membership.

Farrell took over at the midpoint of Ireland’s twenty-year building society boom. This occurred because building societies could guarantee the non-disclosure of their depositors’ account details to the Revenue Commissioners while enjoying tax advantages that allowed them to offer savers better terms. As taxes rose throughout the 1970s and 1980s, money from the swelling black economy flooded into the building societies. In return they delivered the cheap loans that drove a surge in homeownership, and none more freely than the Irish Permanent: it dominated the Irish Building Society Association (IBSA) cartel, comprising the five biggest building societies or ninety per cent of the sector, being almost as big as the other four combined.

In 1976 Farrell pushed through rules that hindered members from challenging the sitting directors as well as a bonus arrangement whereby each year directors received a penny for every £100’s worth of Irish Permanent assets. Accordingly, its asset base rose sevenfold from 1975 to £1 billion in 1985. In 1979 he secured a thirty-three-year contract as managing director on an index-linked yearly salary of £45,000, along with assorted bonuses and benefits. Irish Permanent loaded extra costs on its borrowers by obliging them to use certain high-charging solicitors, insurers and valuers, for which it levied commissions on the beneficiaries; Farrell and other Irish Permanent principals were believed to take a portion of these commissions.

In December 1979 he stoked the rumour mill further by authorising the purchase of Sean Lemass House on St Stephens Green, Dublin, from the controversial property developer Patrick Gallagher (qv) for a suspiciously generous £7.5 million. Renamed Edmund Farrell House, it became the society’s headquarters. The relentless expansion of Irish Permanent’s branch network generated plenty of business for his auctioneer brother Michael, until Michael was forced to resign from the board in 1986 after allegedly withdrawing over £110,000 from the Irish Permanent with subsequently dishonoured bank cheques.

Edmund seemed bored by his conspicuously light workload, exerting himself only when it came to the correct use of grammar. His ultimate authority was unquestioned, and interest rate negotiations within the IBSA were sometimes delayed because he could not be contacted. Reclusive, soft-spoken and exquisitely mannered, he lived well but without ostentation in a mansion in Westminster Road, Foxrock, Co. Dublin, which he bought in 1975, and subsequently renovated, with Irish Permanent loans. He was a member of Mensa (the high IQ society), had an interest in philosophy, and enjoyed fine wines, sailing, travelling and fishing. A fitness and healthy eating obsessive, he installed a gym in his home with swimming, jogging and tennis being his main sporting pursuits. During the mid-1980s he became a devotee of the Irish world featherweight champion Barry McGuigan and had the Irish Permanent sponsor several of his fights.

There was always wrangling between the IBSA and the government, as the building societies could have offered borrowers easier terms and done more instead of delaying or stopping loan approvals when deposits were low – though these periodic ‘mortgage famines’ were also caused by the excess demand arising from artificially low rates. All the building society chiefs resisted political interference, but Farrell alone revelled in open confrontation. In the late 1970s he ignored a government directive aimed at achieving lower prices for homebuyers and took the state-owned Irish Life assurance company to court (unsuccessfully) for establishing a building society. He also defied the government, and broke with the cartel, in setting rates in 1977 and 1982.

He was primarily responsible for the poisonous relations that developed between the IBSA and the 1982–7 Fine Gael–Labour coalition government, culminating in his vendetta with the minister for the environment John Boland (qv). Farrell’s arrogance exemplified how the building societies had morphed into overmighty financial oligarchies more focused on profiteering than in performing their original social function. During the mid-1980s their extended period of growth ended with the dismantling of their tax advantages and the government’s encouragement of competition (be it for savers or homebuyers) from banks, insurance companies and the Post Office.

When Farrell opened merger talks with the second largest building society in 1985, the government scuppered this initiative by making known its opposition while announcing an inquiry into the building societies, which produced a damning report. In 1986 he escalated matters again by introducing tiered interest rates – meaning those that borrowed more paid more – controversially applying them to existing mortgages as well as to new ones. Boland rushed through punitive legislation that abolished tiered mortgages, the penal mortgage redemption fees, the unnecessary legal costs and assorted restrictive practices. The Irish Permanent led the other building societies in curtailing home loans, ceding a chunk of its market to the banks.

Grudgingly accepting the reality of competition and of financial services diversification, Farrell sought legislation permitting building societies to do more than advance home loans, buy government bonds and draw funding from retail savers. From the mid-1980s he openly supported the main opposition party Fianna Fáil and personally courted its leader Charles Haughey (qv), dealing solely with him regarding party donations. Farrell handled the Irish Permanent’s political donations without reference to the board.

Aside from donations that were lodged appropriately in the Fianna Fáil accounts, Farrell signed seven Irish Permanent cheques between 1986 and 1991, totalling £180,000, that were received and corruptly appropriated by Haughey; this included a £20,000 cheque solicited by Haughey in 1989 for a liver transplant for his political colleague Brian Lenihan (qv). Farrell subsequently emphasised, with varying degrees of plausibility in each case, that these cheques were intended as legitimate political or, in the case of Lenihan’s liver transplant, charitable contributions. Fianna Fáil’s chief fundraiser, however, recalled a conversation in 1987 wherein Farrell told him that Haughey would need help financing his expensive tastes.

With Fianna Fáil in power from 1987, the political picture brightened for Farrell, but embarrassment ensued when that year’s Irish Permanent AGM was adjourned in uproar amid a strong election challenge to the board by a depositor Muriel Scorer, and a chorus of complaints from the floor about staff canvassing of customers for proxy votes, the lack of transparency surrounding directors pay, and the high spending on advertising, sponsorships, new branches and management expenses. Farrell’s disdainful responses made a terrible impression. Scorer became a media darling even as her annual attempts to win election to the board came to naught.

Anticipating tighter regulations on salary disclosure, Farrell was desperate to hide his pay, which by the mid-1980s stood at £160,000 a year, rising to well beyond £200,000, counting bonuses and benefits. Thus, in 1986 he accepted a new ten-year employment contract on a £100,000 salary, compensating himself with disguised payments routed through Isle of Man companies. Moreover, in 1987 he sold his mansion (‘Grasmere’) to the Irish Permanent for £275,000 but remained as a tenant with the right to repurchase it at any time for the same price. He did so in 1991 by which time Irish Permanent had spent £437,000 on extending and renovating Grasmere. The repurchase was financed by his receipt shortly beforehand of a £300,000 payment whereby he undertook not to work for a rival building society for a year after his eventual departure.

After the Fianna Fáil government passed legislation in 1989 allowing building societies more freedom, Farrell determined that the Irish Permanent should demutualise, secure a banking licence and float on the stock exchange. Its 500,000-strong depositor base and network of ninety office branches, accommodating almost a thousand employees, left it well capable of taking on the banks. He recruited a team of seasoned financial services sector hands to carry the Irish Permanent forward and seemed content with a well-paid ceremonial role, stepping down as chief executive to become executive chairman at the start of 1993. By then his stranglehold over the board had been weakened by the resignations of several long-serving outside directors due to concerns about conflicts of interest.

This proved crucial once the pre-floatation vetting process exposed some of the Grasmere renovation expenses. With stockbrokers and the Central Bank insisting on the full disclosure of all the Grasmere transactions as a precondition for the floatation, Farrell expressed last-minute opposition to continuing with it and challenged the share option arrangements. Forced to cancel the planned announcement of the floatation on 14 February 1993, Farrell’s new executive team concluded that he had to go and began fraud investigations.

Although even his remaining allies on the board advised him to resign, he refused, insisting that the transactions in question were properly sanctioned. Certainly, the legal issues involved were complex and the directors could at best claim partial ignorance. Regardless, they suspended him as chairman on 10 March and then sacked him on 2 April. This played out to a drip-feed of leaks concerning the salaries, loans, tax-free bonuses and service fees received by Irish Permanent directors and executives. Farrell conducted himself gracefully throughout, showing no stress or anger. The new regime successfully floated Irish Permanent in 1994, claiming salaries and share options that made Farrell’s spoils look modest.

Disputing the ownership of his home, the Irish Permanent sued Farrell for frauds totalling £1.3 million, comprising the Grasmere expenses, the £300,000 ‘golden handcuff’ payment and three other transactions, while he counter-sued for breach of contract. The case came before the High Court in 1997 and was settled within three days, by when his legal costs, which were not awarded, came to £350,000. He kept Grasmere and recovered his pension entitlements, seemingly worth £47,000 a year, in return for surrendering an apartment in Boston (worth £100,000) and paying £150,000. In 1998 he sold Grasmere, by then mortgaged for £250,000, for a reported £2 million, retaining an acre on the site, which he sold the next year with planning permission. He is believed to have bought a house nearby.

During 1999–2001 he testified before the tribunal of inquiry that investigated political corruption, and in 2002 there was another legal skirmish with the Irish Permanent (by then Permanent TSB) over his pension arrangements. Otherwise, he sank from view, dying on 19 May 2014 in the Bon Secours Hospital, Dublin. His remains were cremated.