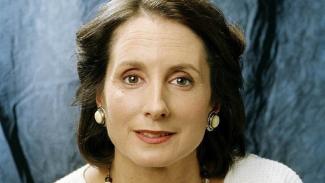 Susan Fitzgerald in a publicity shot from Fair City in 1994
Copyright
Courtesy of RTÉ Archives. All rights reserved

FitzGerald, Susan (1949–2013), actor, was born on 28 May 1949 in Leicester, to Irish parents Emily FitzGerald (née Irwin) and William FitzGerald, a general practitioner. She was the eldest of six children, with three brothers and two sisters. The FitzGeralds were a well-connected family: the Oscar-nominated actor Geraldine FitzGerald (qv) was Susan's aunt and godmother, and the playwright Denis Johnston (qv) and his novelist daughter Jennifer Johnston (b. 1930), and the British actress Tara Fitzgerald (b. 1967) were also among her relations.

Susan was educated at Evington Hall convent school in Leicester, and continued to commute to the school with her sister Rosie after her family moved to Kinsale, Co. Cork, in 1966. She then went to TCD in 1968 to study English, philosophy and history. While there, she joined the Trinity Players theatre group and met her husband-to-be Michael Colgan (b. 1950), who would go on to become director of the Gate theatre (1983–2017). In addition to parts in Trinity Players' productions, Susan landed her first minor television and film roles in the early 1970s, including on the RTÉ soap opera The Riordans and an uncredited bit-part in John Boorman's surreal cult-classic Zardoz (1974).

She made her professional stage debut as Alison in John Osborne's 'Look back in anger' at the Eblana theatre, Dublin, in 1972. Her performance was widely praised, including in the Irish Independent which commended her 'dignity and high sensitivity in a beautifully modulated portrayal' (17 February 1972). Her big breakthrough came playing the titular role in the Gate theatre's 1973 production of 'Lady Windemere's fan', under the direction of Hilton Edwards (qv). The play, and her performance, received less effusive reviews than her debut, however. The Irish Press labelled the whole production as 'uninspired' and FitzGerald and co-star David Byrne as 'antiseptic lovers' (14 March 1974). The Irish Independent was more generous, stating: 'the slightly ridiculous primness of Susan Fitzgerald's (sic) Lady Windemere has its charm' (21 November 1973).

Despite its mixed reception, the role marked the beginning of FitzGerald's long association with the Gate. At that theatre, she appeared in major roles including the Marquise de Merteuil in Christopher Hampton's 'Les liaisons dangereuses' (1987), Olivia in William Shakespeare's 'Twelfth night' (1988), Liz Essendine in Noël Coward's 'Present laughter' (1994), Miss Havisham in an adaptation of Charles Dickens's 'Great expectations' (1995), Lady Croom in Tom Stoppard's 'Arcadia' (1999), Madame Raquin in Émile Zola's 'Thérèse Raquin' (2001) and Lady Bracknell in Oscar Wilde's (qv) 'The importance of being earnest' (2003).

She featured in two plays in the Gate's first, much-celebrated Samuel Beckett (qv) festival in 1991, one as May in 'Footfalls', and the other as Ru in 'Come and go'. She went on to star in 'Footfalls' at the Beckett festival in New York in 1996, the Barbican in London in 1999 and the version filmed in 2000 as part of the ground-breaking Beckett on film project which featured extracts from nineteen plays. This latter project placed Susan alongside acting luminaries such as Michael Gambon, Rosaleen Linehan, John Hurt, Anna Massey, John Gielgud and Harold Pinter. While primarily a Gate player, FitzGerald appeared at the Abbey theatre on a number of occasions, including in major productions of Shakespeare's 'A midsummer night's dream' (1979) and 'Six characters in search of an author' by Luigi Pirandello (1996), as well as performing at other Dublin theatres. Her last appearance on stage was in the much-praised comedy 'Between Foxrock and a hard place' by Paul Howard which opened at the Olympia theatre in 2010 and was later staged at the Cork Opera House and Gaiety theatre in 2011. This was her second outing as Fionnuala, the plummy matriarch of the O'Carroll-Kelly family; she first played her in 'The last days of the Celtic Tiger' which opened at the Olympia in 2007.

Though first and foremost a theatre actor, FitzGerald also made many forays into film and television during her forty-year career. Her first significant film role was playing the character Emma in Joseph Strick's adaptation of James Joyce's (qv) A portrait of the artist as a young man (1977). She followed this with supporting roles in films such as The serpent's kiss (1997), Angela's ashes (1999) and Happy ever afters (2009). After her brief turn in The Riordans on television, she appeared in Last of summer, co-starring Gerard McSorley and David Kelly (qv) in 1977, The Irish R. M. (1984–5), the long-running soap opera, Fair city, as recurring character Nora Clancy in the 1990s, the BBC mini-series Rebel heart (2001) and RTÉ drama series Proof (2004–05). She also performed in numerous radio dramas and adaptations for RTÉ Radio. Her final radio performance was in 'After life' (2010), a play written and directed by John Boorman.

FitzGerald was celebrated for her versatility and grace as an actor, as well as her professional generosity, in particular in mentoring younger actors. Fiach Mac Conghail, director of the Abbey theatre, paid tribute to her range: 'Her work, particularly on Oscar Wilde, was extraordinary. What many people didn't know was that she was particularly great at tragedy; she understood tragedy and, as such, it was very easy for her' (Ir. Independent, 10 September 2013). FitzGerald once said that 'great actors have to live and eat and breathe their craft' – her enormous professional output is a testament to this (TN2 magazine, 20 September 2013).

Susan married Michael Colgan in 1974. They had two daughters, Sarah and Sophie, and a son, Richard, and divorced in 2010. She died in Dublin on 9 September 2013 following a long battle with bowel cancer. On the night she died theatres around Ireland paid tribute to her with applause and standing ovations. Her funeral mass was at the Church of the Three Patrons, Rathgar Road, Dublin 6, on 11 September 2013. She is buried at Mount Jerome cemetery, Harold's Cross, Dublin.