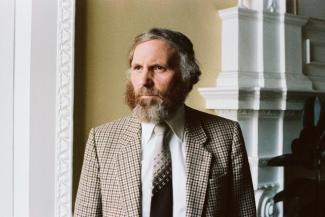 Fitzsimons, Jack (1930–2014), architect, writer and politician, was born on 26 April 1930 in the county home at Trim, Co. Meath, one of a family of six of John (Jack) Fitzsimons, a farm labourer, and Annie Fitzsimons (née Monaghan), a former domestic servant, living at Kilbeg, Gravelstown, Carlanstown, Co. Meath. Four of the children, three sons and a daughter, survived to adulthood. During Jack’s early childhood the family lived in a rented two-roomed, mud-walled thatch house with a large vertical crack in one wall. In 1933 they moved to a county council cottage on a one-acre site nearby and were granted a five-acre Irish Land Commission holding. Living conditions at this house were only slightly better than the first, and the family struggled to get by on his father’s wages as a brickmaker for new council houses being built in the area. In late 1940 his infant sister Annie died. Fitzsimons attributed her death to the family’s poverty and the coldness of their home in winter. Recalling the event in Bungalow bliss bias (published posthumously in 2019), Fitzsimons wrote ‘I believe Little Annie had a more profound influence on my life than any other human being’ (p. 11). Improving housing conditions for the rural working class would become the leading cause of his life.

Fitzsimons was educated at the Carlanstown national school (1935–43) and then, with financial help from his parish priest, attended the Christian Brothers secondary school in Kells, where he completed his leaving certificate in 1949 despite missing over two years schooling while working as a farm labourer. For the next two years he worked on the ESB rural electrification scheme fitting service connection cables to houses. Travelling around north Meath, he saw that many of the houses were poorly constructed and in very bad condition. He next worked as a clerk in the assistant county engineer’s office in Kells, Co. Meath, engaged in road improvement works, and was promoted in 1954 to draughtsman in the county engineer’s office in Navan, responsible for mapping labourers cottages in Meath, and subsequently with drawing sitemaps and plans for house extensions. He became a senior engineering draughtsman with the OPW (1958–63) and took his first examination with the RIAI in 1958, though his plans to take intermediate and final exams were interrupted when he became a clerk of works for Meath County Council on large new housing schemes in Kells and Navan. Having acquired extensive building experience on that job, he decided to establish a private practice c. 1966 (trading as Kells Art Studios from 1972), designing and supervising the construction of houses and other buildings. In June 1968 he married Anne Grace and together they had five children: Cora, Lana, Lloyd, Emla and Kennas.

Fitzsimons self-published Bungalow bliss in July 1971. Covering all aspects of building a bungalow – from site preparation to planning laws to the installation of septic tanks – the book’s aim was to support lower-income families who could not access architects’ services to self-build decent modern housing, replete with such luxuries as indoor toilets and back boiler-fired central heating systems. Twenty build-ready bungalow plans advertised in the book could each be purchased for a small, one-off fee of £10, and were designed so that the bungalows would be eligible for state building grants.

Initially self-distributed to bookshops, newsagents and petrol stations, Bungalow bliss was hugely successful. The first edition of 5,000 copies sold out within three months. The book, which ran to twelve editions, each including additional new plans, sold over 250,000 copies in total and was credited with the subsequent boom in Irish bungalow building during the 1970s and 1980s. By 1976 5,500 new private bungalows were being built every year, doubling to over 11,500 per annum by 1981; rural bungalows accounted for forty per cent of houses built in Ireland in the early 1980s. The social commentator Fintan O’Toole described Bungalow bliss as ‘the great leveller of Irish rural society, a bible of social mobility … The new bungalows were the perfect compromise between consumerist individualism and the desire to stay put in your own place, between the new values and the old’ (O’Toole, 314).

A typical Bungalow bliss house was a rural one-off, one-storey concrete structure with much larger windows than its cottage predecessors. It usually had three or four bedrooms and was often painted white and set in a lawned garden of between half and three-quarters of an acre – a size determined by a capital-gains tax break available to farmers. Self-builder’s personal additions such as hacienda-style arches, stone cladding, balustrades or columns were a new departure in rural Irish house design, and while only a minority of the new homes had these features, they were used by bungalow detractors to malign them all as blots on the Irish landscape.

Bungalow bliss inspired similar publications, though it remained the firm favourite of would-be self-builders. As new bungalows proliferated across Ireland, Fitzsimons and his book came under sustained attack from architects, planners, conservationists and commentators. In a three-part series of articles titled ‘Bungalow blitz’ (September 1987), Irish Times environment editor Frank McDonald decried the ‘vulgar, ostentatious bungalows’ that represented a ‘rabid individualism’ that threatened the scenic beauty of the Irish countryside, damaged the environment and had a high societal cost to rural Ireland. Fitzsimons argued that his detractors, particularly those based in urban areas, were out of touch with the housing needs of rural Ireland. In his polemical Bungalow bashing (1990), he concluded that much of the criticism of the bungalow boom in Ireland was rooted in class snobbery. While such criticism did often focus on the aesthetic in superior tones, much of it was also practical, relating to the pitfalls of one-off housing and ‘ribbon development’, that is the building of housing along routes into population centres. These led to the dispersal of communities and the decline of populations of rural villages and towns, which in turn gave rise to problems with access to public services including telecommunications, transport, education and health centres, as well as increasing dependency on cars. While the terms ‘Bungalow blitz’ and ‘bungalow blight’ were used by detractors, ‘bungalow bliss’ was regularly adopted by estate agents to conjure an image of cosy, idyllic homes.

In 1973 Fitzsimons was appointed as a peace commissioner, and in 1979 was elected to Kells Urban District Council (UDC) as a member of Fianna Fáil, and re-elected in 1985. From 1983 he was also a Fianna Fáil member of Seanad Éireann, nominated by the Irish Architects Society and elected by the Industrial and Commercial Panel. He served two terms as a senator, being re-elected in 1987, making significant contributions to the debates on the building control bill (1984), the animals bill (1985), and the air pollution bill (1986), and is best known for his contributions to the national monuments (amendment) bill (1986). (Despite leading the bungalow-building revolution, Fitzsimons had a particular interest in the preservation of thatch houses and published a detailed study of thatched cottages in his native Meath.) Housing was a key issue for Fitzsimons, and he also took a strong stance against hunting, hare coursing and social issues including Travellers’ and women’s rights that were not popular among his Fianna Fáil colleagues. In a posthumous tribute to Fitzsimons, Senator Paschal Mooney noted that he lost his seat to another party member in 1989 mainly because of his opposition to hare coursing. Fitzsimons himself was disillusioned with the direction of Fianna Fáil under taoiseach Charles J. Haughey (qv) and left it immediately after losing the 1989 election, calling for Haughey’s resignation and stating that under his leadership there was ‘no ideology, no consistency, no positive approach’ and that debate was stifled (Irish Times, 19 Aug. 1989). He also resigned his Kells UDC and Meath Vocational Education Committee seats, as he had been elected to them as a member of Fianna Fáil. Not long after losing his seanad seat, Fitzsimons published Democracy be damned (1989), described by one reviewer as ‘a bitter book. But the bitterness is not that of just a defeated politician but of a frustrated idealist who believed that public life offered opportunities of improving society and found it, by and large, simply a forum for personal advancement’ (Nationalist and Leinster Times, 21 Dec. 1990).

During the 1980s Fitzsimons was involved in various local committees including the Meath county library committee; the UDC’s ancient monuments advisory committee; the committee for the establishment of a Meath county museum; the Kilbeg cemetery committee and the Kells swimming pool fundraising committee. After leaving Fianna Fáil, he was elected to Meath County Council as an independent, serving until 1999. In 1994 he ran unsuccessfully in the European parliament elections for the Leinster constituency as an independent, receiving 2.6 per cent of the first preference vote. His manifesto priorities were housing, Travellers’ and women’s rights, and the abolition of blood sports. That same year he published Coursing ban be damned (1994), his plea to end hare coursing and other blood sports in Ireland. After leaving Meath County Council in 1999, he remained politically active in an unofficial capacity, maintaining his interest in civic and planning matters.

In later life he undertook a diploma in built environment studies (2002) and a B.Sc. in architectural design technology (2004) with the University of Wales. He was elected MRIAI in 2007 and was also a fellow of the Architecture and Surveying Institute, the Irish Architects Society, the Association of Building Engineers and Chartered Institute of Building, and an associate of the Society of Chartered Surveyors, a chartered architect with the Royal Institute of British Architects, and a member of bodies including the Irish Building Control Institute and the Royal Institution of Chartered Surveyors.

A prolific writer, he published a number of books on his native Meath including The parish of Kilbeg (1974), a detailed history of the area he grew up in, The plains of royal Meath (1978) and Thatched houses in Co. Meath (1990), the latter illustrated with his own photographs. He also edited a quarterly publication, The Meath Monitor, wrote fiction and poetry and enjoyed painting.

In his last years Fitzsimons battled cancer, suffered from pulmonary fibrosis and was confined to a wheelchair. However, he continued to write, and at the time of his death on 4 November 2014 at Our Lady’s Hospital, Navan, Co. Meath, was working on three books: The Pilates of Geblik, a collection of short stories (published in 2016), a history of the Bungalow bliss phenomenon (published as Bungalow bliss bias in 2019), and his reflections on religion (unpublished). After funeral mass at St Colmcille's church on 6 November, Fitzsimons’s remains were buried in St Colmcille’s cemetery, Kells. Celebrated for his outspokenness as well as his unique personal style and colourful dress sense, he was most admired as an extremely principled man who, in the words of his son Kennas Fitzsimons, ‘did what he believed was right, not what was politically expedient’ (Irish Times, 13 Mar. 2019). A year after his death, on 18 November 2015, his wife Anne and five children were invited to Seanad Éireann to hear tributes to Fitzsimons from senators Maurice Cummins (Fine Gael), Thomas Byrne (Fianna Fáil), Paschal Mooney (Fianna Fáil), Ivana Bacik (Labour), Sean D. Barrett (Independent) and the leas-chathaoirleach (deputy chair) Denis O'Donovan.

A short film titled Bungalow bliss, produced by Adrian Duncan and Fearghal Ward, was broadcast in 2016. In 2021 RTÉ ran a television series titled My bungalow bliss which followed the renovation and modernisation of bungalows from the 1970s to 1990s, and acknowledged Fitzsimons’s enduring contribution to Ireland’s architecture and landscape.