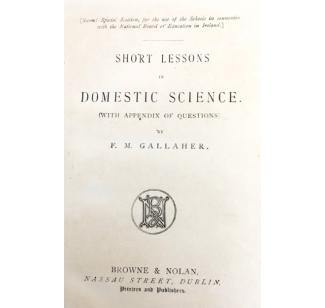 Title page from 1890s edition of 'Short lessons in domestic science' by F. M. Gallaher
Copyright
Fair use. Copy held in the National Library of Ireland

Gallaher, Francesca (Fannie) Mary (1854–1936), writer, was born 30 May 1854 in Cork to John Blake Gallaher and Sarah Gallaher (née Russell). She was the middle child and only daughter of three. Shortly after her birth, the family moved to Dublin, first to 7 Upper Oriel Street and subsequently to 16 Nelson Street. Her father, John Blake Gallaher, was the editor of the Freeman’s Journal (c.1860–1894) while her two brothers, Fred and Joseph, both became journalists with the same paper and are both referred to in James Joyce’s (qv) Ulysses. A colourful sports journalist, Fred was a celebrated Dublin character, renowned for his reporting on the ‘Invincibles’ group who perpetrated the 1882 Phoenix Park murders. Fannie attended Alexandra College in Earlsfort Terrace, Dublin, and was teaching there by 1877.

In keeping with the family business, Gallaher too was described as working as a journalist and an editor. In 1880 M. H. Gill & Son published two of Gallaher’s novellas, Katty the flash: a mould of Dublin mud and A son of man under her pseudonym, Sydney Starr. A sympathetic but unflinching portrait of a destitute woman with a child born outside marriage, Katty the flash has a journalistic realism and attention to detail; it ran to several editions, versions of which were republished by the New York Sun (27 May 1883) and Temple Bar (vol. 68, June 1883). The Temple Bar version was appended with the tagline ‘by permission of Miss Gallaher’, the New York Sun version ran as being written by the author of Flitters, tatters and the counsellor, a novella published by May Laffan (Hartley) (qv) in 1879. Laffan significantly changed the original text, generally with a view to moderating its caustic and satirical character, except in her treatment of a nun who was depicted far more negatively. Gallaher objected to this, her letter of complaint being published in the Morning and Evening Mail on 20 June 1883. The affair also occasioned comment in the Weekly Irish Times on 23 June, which specifically directed criticism at the editor of the New York Sun as the cause of the upset. Regardless of the confusion, both versions of Katty the flash make an important contribution to the development of an Irish tradition of urban realism.

The other Sydney Starr novella published in 1880, A son of man, is a rumination on the vanity of religious scepticism disguised as a love story. As with Katty the flash, it exhibited the author’s considerable learning and intelligence while using fiction to advance a social and moral agenda. Thereafter she contributed short stories to various magazines, including the Irish Fireside, a weekly literary magazine circulated as a supplement to the Weekly Freeman, then the most widely circulated Irish weekly newspaper. The Freeman’s Journal could also be relied upon to publicise and sympathetically review her publications. She also authored an illustrated collection of stories for children, titled Children’s chums, published by Spencer Blackett in the 1880s.

Her later novels, Thy name is truth: a social novel (1884) and The dawn of day (1885), both ran to three volumes and were published anonymously with the London publishing house John & Robert Maxwell. Set during the ‘Land war’, Thy name is truth aroused considerable interest for obviously basing some of its characters on prominent public figures such as the nationalist MP Tim Healy (qv). The book, which abounds in contemporary detail, sheds light on how upper middle class catholics lived in late nineteenth-century Dublin, particularly on the tensions between their relatively privileged social status and their Irish nationalist political sympathies. Many scenes occur in the newsroom of a Dublin newspaper while another chapter is set in Alexandra College, fictionalised as Pallas College. The heroine makes feminist statements, and there are pointed comments on the difficulties faced by women authors in getting their works published, yet the Ladies’ Land League is treated scathingly.

If Gallaher supported land reform, Thy name is truth betrays her clear misgivings about the Land League’s violent methods. The book’s even-handedness made it popular among both nationalists and unionists, contributing to its success. So too did the conventionally trite ending, which was likely a response to complaints about the grim realism that characterised her earlier works. This moderate political tone carried over into The dawn of day, which was set in England’s industrial slums; it dwelt on the degradation suffered by the poor while advocating gradualist reform with an emphasis on improved access to education.

Gallaher authored the first textbook in the discipline of domestic science to be published in Ireland: Lessons in domestic science (1884) was reviewed in The Dublin Journal of Medical Science, where the author was lauded for her reasoned explanations for the importance of management of domestic routines. This edition was revised and enlarged in 1906. Short lessons in domestic science, ‘a special edition for the use of schools in connextion (sic) with the National Board of Education in Ireland’ was published concurrently. This is a noteworthy contribution to the historiography of Irish food history, a forerunner of subsequent publications by professionally trained domestic science instructors. There is to date no evidence that Gallaher was professionally trained, and neither does she allude to the relevant qualifications in her writings. In 1887 she was appointed examiner in domestic economy by the Intermediate Education Board in Ireland, and she seems to have continued to examine Irish schoolgirls for many years.

She was teaching at Alexandra College prior to moving to London in the mid-1880s where she was engaged as secretary to the noted philanthropist and advocate of penal reform, Adeline Marie Russell, Duchess of Bedford, from 1889 until the Duchess’s death in 1920; she was left an annuity of £400 in the Duchess’ will. Fannie Gallaher died on 22 December 1936 at 80 Addison House, Grove End Road, London. Her funeral service took place at the Church of Our Lady, Chesham Bois, Buckinghamshire. She was interred in the churchyard at nearby Chenies, next to Adeline, Duchess of Bedford, her employer of thirty-one years.