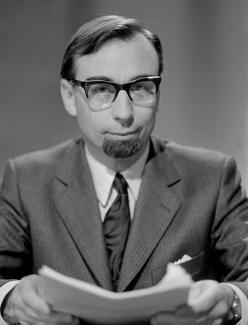 Professor Norman Gibson on 'A question of identity', 1974
Copyright
Courtesy of RTÉ Archives. All rights reserved

Gibson, Norman James (1931–2014), economist and university administrator, was born on 13 December 1931 in Lisnaskea, Co. Fermanagh, the younger of two children of Frederick Gibson, a shopkeeper and small farmer, and Hilda Gibson (née Smith). Frederick Gibson (1888–1975) was born in Mohill, Co. Leitrim, and worked most of his life in Lisnaskea, while Hilda (1892/3–1973) was probably born in Cavan, trained as a nurse at the Adelaide Hospital in Dublin and worked as a ward sister in the County Hospital in Enniskillen. Norman was educated at Lisnaskea primary school, before attending Enniskillen Model School and then Portora Royal School, Enniskillen. In 1949 he entered QUB and graduated in 1953 with a first-class degree in economics.

After graduation he undertook doctoral research into the banking system in Ireland and was awarded his Ph.D. in 1959, despite almost a year spent hospitalised with tuberculosis in 1954–5. In 1956 he was awarded a Commonwealth Fund Harkness fellowship, and in the same year was appointed assistant lecturer at QUB. From 1958–9 he studied economics at the University of Chicago, where he was taught for a time by Milton Friedman (1912–2006), one of the intellectual leaders of the neoclassical Chicago School of Economics. While there he also met his future wife, Faith Alleyne, a visiting Australian Fulbright scholar; they married in New York in 1959 before returning to Northern Ireland where Gibson took up a lectureship at QUB. Among his more notable publications was his chapter on money, banking and finance in A. R. Prest and D. J. Coppock’s The UK economy: a manual of applied economics (1966), which he updated in many editions subsequently.

Gibson went on to hold numerous prestigious posts. In 1962 he was appointed lecturer, then senior lecturer, in economics at the University of Manchester, spending nine months’ sabbatical leave at the University of Wisconsin in 1967. When the New University of Ulster (NUU) was established in 1968, Gibson was appointed as the first professor of economics. His attitude to higher education was underpinned by the principles outlined by John Henry Newman (qv) in his Idea of a university (1852): a university should primarily be driven by the pursuit of knowledge and scholarship and be free from undue external influence or pressure. Gibson established mathematics and econometrics as part of the core syllabus and, as first dean of the School of Social Sciences and then as pro vice-chancellor, developed innovative joint programmes with accounting and other disciplines. In 1982, for example, he linked up with the Institute of Bankers in Ireland to introduce an in-service diploma and linked honours B.Sc. in banking and finance.

While his ideas on economics were influenced by his year in Chicago in 1958–9, he became increasingly sceptical about the rigidity of neoclassical economics and its insistence on the efficiency of free markets. He was convinced that common phenomena such as market uncertainty and externalities were too often ignored by theorists and policy makers. His determination to produce work that was of practical benefit to local communities was given expression in 1967 with the publication of a paper for the Institute of Economic Affairs in London entitled Financial intermediaries and monetary policy, which argued that the growth of financial intermediation was good for the economy. The following decade he carried out three studies: one on the bread industry in Northern Ireland; another in conjunction with fellow NUU professor, John Spencer, on the livestock sector, and a later study discussing policies designed to reduce general unemployment in the province. Gibson and Spencer also edited Economic activity in Ireland (1977), a pioneering attempt to examine the interdependence of the economies in the two parts of the island.

Gibson was also deeply interested in political developments in Northern Ireland. In 1972 he was a member of the Northern Ireland Commission established by the secretary of state William Whitelaw (qv), to advise on major governance issues, and two years later he organised a conference on the economics of various political alternatives for ending violence. Much of his work drew attention to the dependence of the province’s economy on Great Britain, the large size of the public sector and significant net transfer of finance from the British exchequer to Northern Ireland. He noted that ‘those who advocate for a united Ireland, or some form of independence for the North, have a duty to spell out in detail how [it] would be financed, and how the standard of living would be maintained and improved’ (Irish Press, 6 Aug. 1979).

During the 1980s Gibson faced a new challenge. In 1982 the British government published a report by Sir Henry Chilver following a review into higher education in Northern Ireland. The Chilver report recommended that NUU, already a small university, be curtailed further. The then direct rule NI government rejected the Chilver recommendations and decided that the charter of NUU be prorogued and the institution merged with Ulster Polytechnic to form a new university. Gibson was outraged at this external interference in the higher education sector and, along with many others, believed it to be an unacceptable assault on the autonomy of NUU. However, Gibson soon came to the opinion that he could protect his educational ideals only by engaging fully with the formation of the new university. He joined forces with Derek Birley (rector of the Polytechnic), and he and Birley worked together to shape the new institution. On 1 October 1984 the University of Ulster (UU) came into existence, with Birley as vice-chancellor and Gibson as pro vice-chancellor for academic planning.

Gibson and Birley felt that priority should be given to increasing the numbers of students based in the north-west, with the Magee campus in Derry deserving particular affirmative action, and Gibson fulfilled his ambition for the new university during his time as pro vice-chancellor. He oversaw the expansion of student numbers at the Magee campus from fewer than 200 to more than 2,000 by the early 1990s; while in the same period, the campus at Coleraine almost doubled to over 4,000, and overall numbers increased by nearly 50 per cent to more than 16,000. He also ensured the new university had a say in its future direction when he took part in the higher education review group, chaired by Sir Clifford Butler, which reported in 1988. As a result of the review, physical sciences were concentrated at QUB and business and management at UU. Gibson recognised the increasing importance placed on research in modern third level education, and the advent of the periodic Research Assessment Exercise (RAE; now the Research Excellence Framework) which measured research performance across all UK universities. Working closely with the future vice chancellor, Gerry McKenna, Gibson initiated policies and practices which gained UU a five-star rating in one subject area in 1996, one of only twenty universities to do so, and that was surpassed in 2001 when the university was awarded five-star ratings in two areas.

Gibson retired from UU in 1996 but remained active, writing important articles on university governance and higher education planning. An active participant in the work and activities of the RIA, to which he was elected a member in 1974, he was one of only three NUU academics to be so honoured during its sixteen years of existence. He also served as an RIA council member in the 1980s and was a member of the North–South committee (2007–12). His contributions to Irish economics south of the border included twenty-one years’ service as a council member of the ESRI (1969–90), and four years as an Irish government nominated member of the newly established National Economic and Social Council in Dublin (1973–7). He was appointed a CBE in the 1991 Queen’s birthday honours list.

Outside of his areas of professional expertise, Gibson was widely read, with a lifelong interest in theology, philosophy and Irish history and literature. A practising member of the Church of Ireland, he was a committed ecumenist who maintained that the dogmatic attitudes of the Christian churches often inhibited reconciliation. He welcomed the political progress that led to the Belfast Agreement of 1998, but warned that this could still be undermined by entrenched prejudice and bigotry. In an article in the Belfast Telegraph he wrote, ‘If we, the people of Northern Ireland, are to escape from the imprisonment of our past, we have to let go of it. To accept our share of responsibility for the tragedy that engulfed and still stalks us would be a beginning. We need to acknowledge openly and collectively the devastating harm and hurt we have done to each other and ourselves’ (Belfast Telegraph, 9 Mar. 2002).

Norman Gibson died on 8 July 2014. He was survived by his wife Faith and children Michael, Kathryn and Patrick. After a funeral service at Christchurch, Castlerock, his remains were interred in St Paul’s Church of Ireland graveyard, Articlave, Co. Londonderry. His colleague Gerry McKenna described him ‘an unwavering advocate of a pluralist Ireland’ who would be ‘remembered for his courage, integrity and independence of mind’ (Times HES, 7 Aug. 2014). Gibson’s economics papers are held in the RIA and PRONI. Papers relating to the Troubles and Northern Ireland politics are held in the Linenhall Library, Belfast, and papers connected with the development of the New University of Ulster and the University of Ulster are held in the University of Ulster archives at Coleraine.