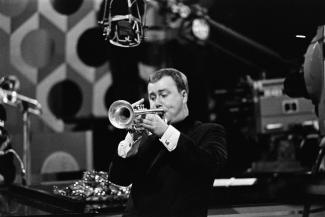 Gill, Earl William (1932–2014), musician and showband leader, was born on 14 October 1932 in East Wall, Dublin, one of two children of William (‘Billy’) Gill, a pianist and accordionist at the Queen’s Theatre, Dublin, and Mary Gill (née Hunter), a cellist. According to Earl, his unusual first name was chosen by his mother after she saw it in an American film credit. Interested in music from an early age, he was taught piano and how to read sheet-music at the RIAM. He made his stage debut aged nine at the Queen’s Theatre where his parents performed, and from the age of twelve had bit-parts at the Abbey Theatre, including one production where he played off-stage trumpet calls. Around this time, he had a serious accident at the Abbey in which he lost the index and middle finger of his left hand, effectively ending his piano career before it had properly begun. Undeterred, he switched to the trumpet full-time. By the age of fifteen he had dropped out of formal schooling to concentrate on his musical career, claiming that he earned more in a week than his teachers did.

For the next ten years Gill built a reputation as a self-taught trumpeter, playing a variety of venues and styles. At fifteen he was playing second trumpet in the orchestra at the Olympia Theatre, Dublin, six nights weekly under the baton of Bobby Bolton. He also performed in a trio with his father Billy and sister Muriel, and had residencies in other theatre orchestras, including the Gresham Hotel, one of the foremost dance venues at the time. Gill found himself as ‘the only male in an all-girls band’ when he played with Muriel in Edwin Mitchell’s Cremona All-Girls’ Band. From about 1950 he played with Pat Moran’s orchestra at the Four Provinces Hotel, Dublin, before moving to Derry in 1952 to play with the Gay McIntyre band, whose Dixieland formula and sparkling presentation helped him develop his style. He returned to Dublin in 1953 when asked to front the band at the Theatre Royal, and the following year took over the baton for the residential band at the Palm Court, Aungier Street. In November 1954 the Evening Herald hailed him as ‘one of Ireland’s … most accomplished instrumentalists’ while an advertisement in the same paper declared him ‘Ireland’s youngest band leader’ (6 Nov. 1954). Cornelius Gallagher, reporting to Archbishop John Charles McQuaid’s (qv) ‘Vigilance committee’ after a visit to the Palm Court ballroom in 1955, was however less impressed by Gill’s style and audience: he reported the venue ‘packed [with] 100% Teddy boys and, I suppose, Teddy girls … The dancing was almost 100% jiving [and] there were a few slow dances. The position in which the partners held themselves then was even … more indecent’ (Bowman, 228).

As well as being a virtuoso trumpet player, Gill was a talented arranger and skilled bandleader. His longest musical association was with the Shelbourne Hotel where he was musical director (1956–65) and (1976–97). During the latter half of the 1950s the Earl Gill Band built a reputation as an accomplished musical outfit, featuring musicians such as Sonny Knowles (1932–2018) and ‘Big’ Jim Farley, who went on to enjoy fame in their own right. The band also opened for the American jazz impresario Count Basie and his band when they played the Theatre Royal in 1957 during their European tour, and they backed the highly successful singer Ruby Murray (qv) when she toured North America in 1959. They worked steadily throughout the early 1960s but by the middle of the decade instrumental jazz was declining in popularity and in 1964 the band added Sean Dunphy (qv) on vocals to broaden their appeal. Under the management of promoter Oliver Barry, the Earl Gill Band morphed into a stand-up, touring showband, with Gill on trumpet and singer Amy Hayden added to the ensemble. The band was renamed in 1965 after an appearance on the Telefís Éireann country-and-western programme Hoedown; surrounded by singing cowboys and cowgirls, Gill’s band provided the backing music and took the name ‘Earl Gill, Sean Dunphy and the Hoedowners’. According to Des Cluskey of the Bachelors, the national exposure turned Gill into ‘the first superstar single name showband leader … [bridging] the gap between the classy, brass-led, big band style and the brash, showy style of the thousands of showbands trekking up and down the roads of Ireland’ (Irish Times, 10 May 2014).

Between 1966 and 1973 the Hoedowners had fifteen top-twenty hits in the Irish charts, making them one of the most successful bands of the era. Their first single, ‘Wonderful world of my dreams’, made it to number five in the charts, and there were only a few weeks over the next seven years when they were not in the top twenty. In 1967 lead singer Dunphy represented Ireland in the Eurovision Song Contest in Vienna with the song ‘If I could choose’. He came second to Britain’s Sandie Shaw, giving the band further national exposure and their fourth hit single. To capitalise on their singer’s Eurovision success, the band was renamed Sean Dunphy and the Hoedowners.

Throughout the late 1960s the band toured Ireland, playing to large audiences in a variety of venues, some of which could be grim. Recalling these ‘ballrooms of romance’, Gill noted that ‘they could be sad places … a lot of girls would just be wall flowers in the place, men as well [and] they were pretty rough … with the men often coming in plastered … Once the music struck up, however, there would be a mad rush–boys towards the girls. Then after that it was ok’ (Irish Press, 16 Sept. 1985). The hits continued to roll in and his band was the first to release a single ‘Talking love’ (1968) and an album, Ireland’s own Sean Dunphy (1968) on Dolphin Records, the label recently founded by Oliver Barry and the young promoter, Jim Hand (1937–2001). In 1969 they finally reached the top of the charts with the single ‘The lonely woods of Upton’, which commemorated an IRA ambush in west Cork in 1921, and spent nine weeks at number one. Their follow-up single, the romantic ballad ‘When the fields were white with daisies’ also went to number one and ensured that the band were in the charts throughout 1969, one of the few Irish acts ever to have a single in the top twenty for twelve months straight.

Musical tastes were shifting once again however and, as showbands began to lose popularity, the means used to retain interest became ever more flamboyant. In 1971 Gill appeared on the RTÉ’s Late late show wearing a false beard, tattered tweed coat, wellington boots and a battered hat, singing ‘I’m a poor poor farmer (what am I going to do?)’, and calling himself ‘Tim Pat’. Apparently even his own mother did not recognise him, asking a neighbour who the ‘dirty oul divil’ on the show was (Sunday Independent, 25 Feb. 1990). The single went to number three in the Irish charts and was the band’s final hit. The following year they changed their name to the Ho-Down Circus and briefly performed in circus outfits. Such antics helped pay the bills but became increasingly dispiriting to a talented musician such as Gill; he and Sean Dunphy soon had enough, and the band played their last show together on 3 June 1973 at the Ballinasloe Carnival.

In the aftermath of his split from the Hoedowners, Gill worked as a session musician and was a regular at the Cork Jazz Festival, playing alongside guitarist Louis Stewart (1944–2016) and pianist Noel Kelehan (qv). In 1976 Gill returned to the Shelbourne Hotel, where he remained in charge of the resident band for the next two decades, which provided him with steady work. He also branched out into other areas of the Irish music scene: he took over the management of several bands, including Hugo Duncan and the Tallmen and folk-rock act Spud, and oversaw the production of several recordings by the Dubliners. In addition, he was musical director of some significant theatrical shows: in 1977 he conducted the seventeen-piece orchestra for Noel Pearson’s world premiere of ‘The King’, based on the life of Elvis Presley. In 1985 he was credited with saving Pearson’s production of Gilbert and Sullivan’s ‘HMS Pinafore’ when actor Alan Devlin departed the stage mid-show; Gill responded by striking up the band’s interval music until Devlin’s understudy was ready to go on. In 1990 Gill finally fulfilled a life’s ambition and released his first solo album, Enchantment, on the Harmac label, a selection of traditional Irish melodies and show tunes which was well received.

In 2012 Gill retired from a lifetime of touring and playing. He died on 4 May 2014 in Dublin and after funeral mass at St Joseph’s church, Glasthule, was buried in Shanganagh cemetery in south Dublin. Speaking after his death, Bill Whelan, producer of Riverdance, described him as ‘a musicians’ musician [who] managed to galvanise people because they trusted his musicianship and … [had] this capacity to turn something ordinary into a great performance (Irish Independent, 18 May 2014). Gill was predeceased by his first wife, Deirdre (née Kenny), and survived by his second wife Mavis and four children.