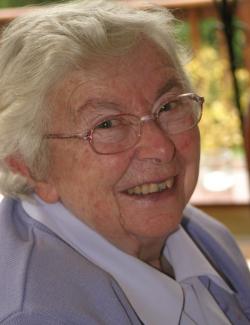 Hardiman, Áine (1926–2013) Dominican nun, community activist and anti-apartheid campaigner, was born Anne Hardiman on 23 April 1926 at 71 Connaught Street, Phibsborough, Dublin, the home of her parents Patrick Hardiman, a railway engine driver, and his wife Christina (née Monahan). The middle of seven children (five sisters and one brother), she attended the local St Peters National School, run by the Vincentians, before moving to Scoil Chaitríona, an Irish-speaking school attached to the Eccles Street Dominican Convent. She enjoyed playing camogie there and took her leaving certificate before entering in 1946 the cloistered Dominican novitiate in Kerdiffstown, Co. Kildare, where she made her first holy profession. Intending to become a missionary, Hardiman studied maths and Latin at UCD from 1948, taking her final holy profession that year at the Dominican convent in Cabra, Dublin. She graduated BA in July 1952 and departed for South Africa that autumn.

She taught maths and Latin at the Holy Rosary High School, a prestigious private white girls school in Port Elizabeth (1952–64), and was adored by her pupils. After serving as principal at Holy Rosary, she moved to St Dominics Priory, Port Elizabeth, and then to Holy Trinity Convent, Matroosfontein, Cape Town. She also studied theology at the Corpus Christi Catechetical College, in London, England, in the 1970s, which first exposed her to the liberal theology of the second Vatican council (1962–5). This and the influence of Latin American liberation theology inspired her to bring the gospel to the people. Returning to the Western Cape area, she pioneered a theologically and ecclesiastically novel catechetical programme in the Cape Town diocese and openly opposed Pope Paul VI’s encyclical Humanae vitae (1968), which rejected the use of artificial contraception.

During the Soweto uprising of June 1976, in which thousands of non-Afrikaner students refused to attend school in protest against the introduction of Afrikaans as the medium of instruction, she illegally organised covert tuition for many of the protestors. From the late 1970s, emboldened with renewed missionary charisma, she devoted her energies to assisting those living precarious lives – working in the impoverished black townships of Nyanga and Guguletu in Cape Town. After completing her term as principal (1981–2) of St Mary’s primary school, Nyanga, she was granted permission by the Dominican leadership to focus on community development in Guguletu. Immersing herself in the culture and languages of the townships, she often lived among the community (residing in their homes, sleeping in their lean-tos or camping in their backyards) and ate their maize-based meals. During the early to mid-1980s she undertook what she later described as an ‘unstructured apostolate’ (Bonner, 420) that sought to address the complete absence of pre-school services in the area and combat latent early childhood deprivation. Forming a close friendship with Rose Mbude, a local mother whose children attended St Mary’s, together they established the Etafeni playgroup project, organising a network of informal creches, sited in backyards or communal open spaces, where teams of mothers cared for pre-school children. Hardiman procured funding from the Quaker Service Fund and other ecumenical groups to provide mothers with childcare training. Since per capita educational funding for white children was eight times that provided to black children, the Etafeni project provided otherwise absent training and childcare services, delivering basic education, healthcare and nutrition to families. Support for early childhood development empowered many mothers to avail of outside work and adult education, significantly enhancing the well-being of the wider community. The project’s success owed much to the cooperative spirit encouraged by Hardiman and to her steadfast ‘idealism, fidelity and sense of community’ (Sr Catherine Campbell). She also saw her work as having a strong spiritual dimension and established the Dominican Family Group in Cape Town to promote Dominican spirituality. She was deeply interested in theology, education and the environment, a friend recalling that a ‘conversation with her might be about Celtic spirituality and pilgrimage or about composting toilets for township preschools’ (Southern Cross, 17 Apr. 2013).

The Calvinist-dominated government of South Africa had always regarded catholicism warily, a view that was accentuated when Hardiman and other liberal catholics questioned and opposed apartheid education policy. Women religious, often braver than their male counterparts, took the lead in organising what became known as the ‘open schools’ movement. While eighty per cent of catholics in South Africa were black, most funding went to white-only schools. From January 1976 Dominican sisters quietly admitted so-called ‘coloured’ children to their formerly white schools, and from January 1977 began admitting black children, but deliberately refrained from publicising these measures and their employment of black teachers. Hardiman though was fearless in her denunciations of apartheid and relentlessly campaigned for justice and human rights, undeterred by the threat of arrest when protesting against army raids, arbitrary arrests and extra-judicial killings.

Alongside three Dominican sisters and students from a nearby racially integrated Dominican school, she participated in a march on 28 August 1985 to Pollsmoor Prison in Cape Town in protest against Nelson Mandela’s incarceration there. She and Sr Feargal Cassidy were arrested and imprisoned in Pollsmoor for five days. Challenged at her arraignment on the likelihood of violence on the march, she retorted ‘I saw no violence except the violence of the police’ (Sr Marian O’Sullivan, witness at hearing). The brutal repression of the march, headed by Hardiman and other religious participants, received significant worldwide media attention, and marked a turning point in struggle against apartheid.

The increasingly repressive actions of the government prompted greater ecumenical co-operation in South Africa and Hardiman and Sr Clare Harkin, a fellow Dominican, were amongst the 153 signatories of various faiths to the influential Kairos (‘moment of truth’) document issued in September 1985. It urged decisive action to confront apartheid and denounced the theological justification that the Dutch Reformed Church provided for the ruling racist regime. Castigating racial repression as idolatrous, Kairos argued that tyrannical regimes forfeit their right to govern and can be overthrown to remedy injustice and oppression, and heralded an escalation in the confrontation between activist Christians and the government. Hardiman openly criticised the Vatican’s 1987 guidance, given by the papal nuncio to the South African Roman Catholic Bishops Conference, for catholics and religious in South Africa to stay out of politics, insisting ‘it is not possible to be in South Africa with the values of the Gospel and not be involved in politics’ (Irish Times, 23 Jan. 1987).

After the collapse of white minority rule in South Africa in the early 1990s, Hardiman periodically returned Ireland, attending religious and ecological retreats and visiting her family. During her later years she resided at convents in Uitenhage in the Eastern Cape and Wittebome and Rondebosch in Cape Town. Known to family and close friends as ‘Nancy’, Áine Hardiman died in Cape Town on 8 March 2013. She was given the clan name ‘Dlamini’ and at her funeral mass in Springfield, Cape Town (where she was buried), Xhosa hymns were sung as her courageous leadership was recalled. A memorial mass was held in Dublin on 22 March 2013. Her brother, T. P. Hardiman (d. 2020), was an engineer and director general of RTÉ.