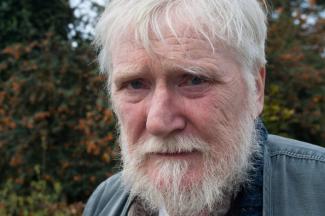 Healy, Dermot (1947–2014), novelist, poet, memoirist and playwright, was born on 9 November 1947 in the village of Finea, Co. Westmeath, the son of Winnie, housewife, and Jack Healy, a garda, and the brother of Tony, Úna and Miriam. When he was a young boy, the family moved to Cavan town following his father’s retirement. There, they lived with his great-aunts and his mother helped in the running of their confectionery and teashop, the Milseanacht Breifne.

The move to Cavan had a profound effect on the young Healy, who initially experienced extreme homesickness. In his memoir, The bend for home, he described how he and his sister Miriam left their new town in the mistaken belief that they could walk home to Finea, only to find themselves, after hours of walking, back in Cavan: ‘It was a great let-down to arrive back to those dark half-day streets, to hear the door open onto the gloom of the hallway’ (Healy, 1996, 47). Many decades later, he recalled, ‘initially, I didn’t take to Cavan at all … It was a leap from a village to a town, from a familiar world to an alien one’ (O’Hagan, 2011). Nonetheless, his Cavan years, specifically the sense of dislocation and alienation he experienced there, were to have a profound influence on his writing. It was also in Cavan that he began to conceive of the notion of being a writer, when in secondary school, an English teacher, Fr Felim McGovern, read A tale of two cities in sections to the class; Healy once described how in doing so, his teacher ‘made this vast thing [writing] comprehensible. It even made it seem possible to write’ (O’Grady, 2004).

His father died in the early morning of Christmas Day, 1962. Healy was fifteen years of age and the death of his father (to whom he had been very close) was followed by a period of turbulence. In 1963, he was expelled from St Patrick’s Secondary College and though he did complete his second-level education elsewhere and even began an arts degree in UCD in 1966, by the end of his first year there he had dropped out. ‘Academic life didn’t suit me’, he noted; instead of attending lectures, he explained in his memoir, ‘I spent the year selling second-hand beds and wiring houses’ (Healy, 57).

In contrast, of living in London he said, ‘I fell into it lovely and stayed fifteen years’. This period began with summers spent there as a teenager engaged in casual work, followed by longer spells in his twenties. During those years, he was employed in a wide range of roles, including building site labourer, Heathrow Airport security guard, insurance underwriter and painter and decorator. Often, he lived in squats. Though not part of the London literary scene, he attended many literary events while there, and read widely, once describing how he read Dylan Thomas while working as a security guard. (Other literary influences include Kafka, Faulkner, Hemingway, Frank O’Connor (qv) and Borges.) He bought his first typewriter while in London with his first week’s wages.

It was also during this period that, on occasional visits home to work in the family bakery, Healy began reading New Irish Writing, which at that point was being published in the Irish Press. While he had been writing continuously, Healy noted that he ‘had not written anything for publication’. He later recalled, ‘Each Saturday I read David Marcus’s New Irish Writing … This was an inspiration. Now I began to put a few words together in earnest’ (O’Grady, 2010).

During the mid–late 1970s, while London remained his main base, Healy moved frequently – between London, Cavan, Dublin, Belfast, Sligo and Mayo (O’Grady, 2004). In this time, three of his short stories were published in New Irish Writing, two of which – ‘Banished misfortune’ and ‘The first snow of the year’ – won the esteemed Hennessy Award (in 1974 and 1976 respectively). It was also in this period that he married Anne Marie Cusack and their son Dallan was born in 1977. In 1978, he settled in Belfast, where he stayed until 1982. In 1981, his daughter Inor was born to Maura O’Brien. The following year, he won the ALCS Tom Gallon Trust Award for his short story, ‘The tenant’, and his short story collection Banished misfortune was published. In a recollection that illuminates this point in his life as a kind of crossroads between his casual work and his career as a writer, Healy once described how his new publishers gave him the job of painting their office.

Healy’s first novel, Fighting with shadows (1984) appeared two years after his short story collection and in 1986, he was elected to Aosdána. These years also saw Healy focus on drama; many such works were produced around this time, including the screenplay for Cathal Black’s acclaimed film, Our boys (1982), as well as the stage plays ‘The long swim’ (1987), ‘On broken wings’ (1992) and ‘Last night’s fun’ (1994).

In 1989, Healy bought a cottage on the Maugherow peninsula outside Ballyconnell, Co. Sligo, and began a long, slow process of renovating it, living there for three years without electricity. This marked the beginning of a more settled period of his life, during which he married Helen Gillard, in 1997, and entered a more fruitful stage of his writing career, one that saw a significant increase in his output, across a range of genres. In 1994, A goat’s song, his most highly acclaimed novel, was published, described by Anne Enright as ‘one of the big Irish novels’ (O’Hagan, 2014). In that year, it won the Royal Society of Literature’s Encore Award for an outstanding second novel and was longlisted for the Booker Prize. Subsequent publications include four volumes of poetry: The Ballyconnell colours (1995), What the hammer (1998), The reed bed (2001), and A fool’s errand (2010); his memoir The bend for home (1996); the collaborative photobook with photographer Bruce Gildea After the off (1999); and third and fourth novels, Sudden times (1999) and Long time, no see (2011). Healy’s posthumous publications include the poetry volume The travels of sorrow (2015) and The collected short stories (2015).

Throughout his life Healy was also involved in other artistic activities, along with a number of community projects. He did some film acting, playing the main role in Timothy O’Grady’s I could read the sky (1999), as well as minor roles in Neil Jordan’s The butcher boy (1997) and John Michael McDonagh’s The guard (2011). He established and edited two regional literary journals – Force 10, whose first issue appeared in 1989, and The Drumlin, which published short stories by writers such as John McGahern (qv) and Eugene McCabe (d. 2020). Both publications also included edited transcripts of interviews conducted by Healy, something he started doing at an early point in his career while working with a photographer from the Anglo-Celt. He often spoke of his love of interviewing people, once noting, ‘The trick was to remove myself completely’. Healy also worked with inmates at Castlerea prison, initially providing writing workshops and culminating in the publication of a magazine comprised of interviews he conducted with them. In the late 1980s, he established a number of local writing groups and workshops. A former member of one of these groups once wrote, ‘People were his first love, budding writers in particular, and there isn’t a writer’s group in the north–west and beyond which wasn’t influenced by him’.

Often described as ‘a writer’s writer’, many significant authors and critics have acknowledged the quality of Healy’s writing. Seamus Heaney described him as ‘the heir to Kavanagh’, while for Patrick McCabe his work is ‘truly revolutionary … high literary art’. For Aidan Higgins (d. 2015), he was the heir to an experimental narrative tradition in Irish literature which includes Joyce (qv), Beckett (qv) and Flann O’Brien (qv). Annie Proulx has described him as ‘one of the best novelists of his time,’ and Roddy Doyle as ‘Ireland’s greatest writer’. In particular, people have praised his radical use of language; of his last novel, Long time, no see, Sean O’Hagan noted, ‘As a reader, you have to surrender to a vernacular dialogue in which hardly anything is said outright and almost everything is hinted at. I have never read anything like it before’ (O’Hagan, 2014). Many have also commented on ‘his ability to write madness’ (Roddy Doyle), particularly regarding the novels, with their ‘fractured interior world[s], with characters who often seemed haunted or on the verge of psychological disintegration’ (Sean O’Hagan). Another feature often highlighted is the suggestive and sometimes hallucinatory power of his imagery. As Healy himself once said, ‘A lot of people are able to see … what’s there, but I might see what I think is there’.

Dermot Healy died of a heart attack on 29 June 2014, in his home outside Ballyconnell, Co. Sligo, aged sixty-six, and was buried in Carrigans Cemetery. He was survived by his wife Helen and children Dallan and Inor. In the years leading up to his death, the importance of his work had become increasingly recognised in Ireland, a trend that has continued posthumously. In 2011, A fool’s errand was shortlisted for the Poetry Now Award (sponsored by the Irish Times) and in the same year, RTÉ made a portrait of Healy in the Arts Lives documentary, The writing in the sky. In 2013, Long time, no see was nominated for the Dublin Literary Award. Following his death, Dalkey Archive Press released The collected short stories, The collected plays and Writing the sky, an edited volume comprising critical and personal responses to Healy’s writing, in which many authors pay tribute to him, including Colm Tóibín, Michael Longley, Timothy O’Grady, Patrick McCabe, Tess Gallagher, Roddy Doyle, Philip Ó’Ceallaigh, Kevin Barry, Gerald Dawe, Molly McCloskey and Annie Proulx. Writing in an Irish Times article following his death, Eileen Battersby (d. 2018) stated that, ‘He is as important a social commentator as John McGahern and John B. Keane, he knew Ireland, better than that; he understood and loved it, without rancour and without a hint of sentimentality’.

Despite this acclaim in Ireland, elsewhere Healy remains ‘bafflingly unappreciated’ (O’Hagan, 2011). Some have speculated that this lack of international recognition may relate to the fact that he wrote across such a wide range of genres (Murphy and Hopper). Others have pointed to the complexity and experimental nature of much of his work. Neil Jordan has commented, ‘In an age of user-friendliness, he’s not that. He has been in an intense and private struggle with language and the imagination … He writes facing the irreconcilable conflicts inherent in living. It’s the voice of tragedy’. On a similar vein, his first publisher Bill Swainson highlighted the originality of Healy’s work: ‘The closer [Irish writers] get to stereotype the more successful they are outside of Ireland. If you do something truly original and challenging, the route has more obstacles. Who knows if his place in literature will be secure, but if it isn’t it won’t be because he’s sold his art short’.