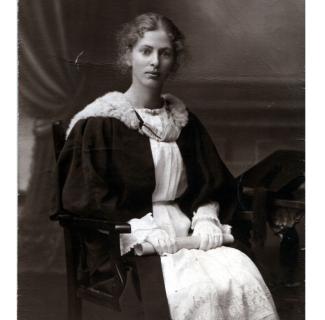 Mary Dorothea Heron posing with her Bachelor of Laws (LLB) degree. The 'First Lady' of law was admitted to the Roll on 17 April 1923, becoming the first woman solicitor in Ireland
Copyright
Fair use

Heron, (Mary) Dorothea (1896–1960), first woman to be admitted as a solicitor in Ireland, was born on 19 August 1896 at 68 Harcourt Street, Dublin, the home and solicitor’s office of her maternal grandparents, William and Dorothea Jameson. Usually known as Dorothea or ‘Deasie’ to her family, she was the eldest of five surviving children of James Heron (1863–1924), from Co. Down, a presbyterian engineering graduate from Queen’s College Belfast (later Queen's University Belfast (QUB)) and county surveyor for Monaghan, and his wife Mary Lyster (née Jameson), a protestant classics graduate from Alexandra College in Dublin (1894). Education was embedded in both families. William Jameson, Heron’s grandfather, was a solicitor and held an MA from Trinity College Dublin (TCD), whilst her great-grandfather, Joseph Henderson Singer (qv), was regius professor of divinity at TCD and secretary of the Royal Irish Academy (RIA) prior to his appointment as bishop of Meath. Her paternal grandfather, James Heron (1836–1918), was professor of ecclesiastical history, church polity and pastoral theology at the Assembly’s College, Belfast, and moderator of the presbyterian church in Ireland in 1901.

The Heron family moved to Dillon, Ardglass, Co. Down, when Dorothea’s father, James, was appointed county surveyor for Down in 1899. This was a spiritual and practical return to the Heron heartland – the 1911 census listed eighty-one families in Co. Down called Heron (an Anglo-Norman name from the Scottish lowlands). Dorothea Heron’s first cousin (twice removed), Margaret Byers (qv), from Rathfriland, established the Ladies’ Collegiate School in Belfast in 1859 (re-named Victoria College in 1887). Dorothea took the entrance examination to Victoria College on 5 September 1911, receiving the first Drummond scholarship. Her passage through the college was punctuated by awards and accolades, with a first in Latin in 1914, and she matriculated to QUB in June 1915. She was the third generation of her family to attend the college, graduating with a BA in classics in 1918, and receiving a first-class honours Bachelor of Laws (LLB) degree in 1921.

From the mid-nineteenth century, women had been seeking admission to the legal professions in the United Kingdom without success, and it took the first world war and sustained pressure to change male attitudes. On 23 December 1919 the Sex Disqualification (Removal) Act was passed, allowing women admission to the legal and other professions. Forty-six days later Dorothea Heron became the first woman to be apprenticed as a solicitor in Ireland on 7 February 1920, when apprenticed to her uncle, T. M. Heron, Mayfair, Belfast (president of the Northern Ireland Law Society, 1938).

The partition of Ireland into separate legal jurisdictions in 1921 was of immediate concern to Heron as she approached her final solicitor’s exam the following year. The charter to incorporate the Northern Ireland Law Society was granted on 10 July 1922 but the founding legislation was not enacted until December 1922. The Dublin Law Society resolved the lacuna whereby: ‘those apprenticed on 1 October 1921, be allowed to finish apprenticeship under Dublin’. Heron sat the final examination of the Dublin Law Society on 3–5 January 1923. Remarkably, this was the only Law Society examination taken by Heron as her degrees exempted her from the prior examinations. She excelled in the examination, obtaining second place and a special certificate. The Belfast Telegraph on 3 February 1923 referred to her as ‘The First Lady of the Law’ and praised ‘her distinguished answering’, comparing her with Frances Kyle (qv), also from Belfast, who was the first woman called to the bar on 1 November 1921. Heron was admitted to the Roll on 17 April 1923, becoming the first woman solicitor in Ireland, one of the last cohort of solicitors entitled to practise in both jurisdictions. ‘Miss Heron thinks law as a career for women compares favourably with teaching – more variety and interest in it and less drudgery’ (The Vote, 15 June 1923).

In 1923–4 Heron’s parents died within four months of each other. There was little money: James’s estate was valued at £559, 14s, 10d whilst Mary’s was a mere £5. Dorothea and her four younger siblings moved to Belfast to live with their uncle, Samuel Heron, an architect who designed many modern presbyterian churches. Further tragedy struck when her niece Elizabeth Heron Campbell was orphaned. Dorothea became her guardian and Elizabeth resided with her. Retiring from practice in 1946, she moved in 1954 to Rostrevor to live with her uncle Samuel, who died on 19 March 1957. She then purchased a house on Strand Road, Portstewart, Co. Londonderry, contingent to her sister, Faithful Singer Brewster, in nearby Coleraine. Dorothea Heron died on 9 October 1960 at Coleraine Hospital from a stroke aged sixty-four. She was buried with her uncle Samuel at Clonallan churchyard, near Rostrevor. Her ‘probate effects were £8,931 17s 4d’, and her devises included the sum of £500 to the trustees of Rostrevor presbyterian church.

Heron was pleased to be the first woman admitted as a solicitor in Ireland but, self-contained and self-effacing, never extolled or flaunted her achievement. The death of both her parents in quick succession placed her in a maternal role to her much younger siblings, circumscribing her own expectations of career advancement, with marriage remote due to the large numbers of men killed in the war. Her life was one of service to her family and her presbyterian faith, which her grandfather described as ‘the most powerful agent in Ulster history and has given moral and religious tone to the community’ (Heron, 6). This was exemplified by her values, based on service to others and an austere approach to life and death, which made her a person of probity, worthy to be the first woman solicitor in Ireland.