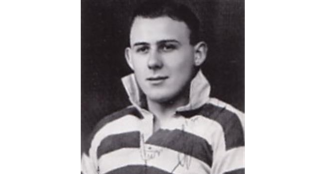 Jones, Jimmy (1928–2014), footballer, was born on 25 July 1928 in Keady, Co. Armagh, the son of Thomas Jones, an RUC sergeant, and Ellen Jones (née Wilson). He was raised in Lurgan, Co. Armagh, and educated at the local Carrick primary school and Lurgan Technical College, after which he became an apprentice mechanic. A talented young footballer, he played with Sunnyside and Shankill Young Men (both Lurgan clubs) and briefly with Linfield FC as an amateur. He impressed Elisha Scott (qv), the legendary manager of Belfast Celtic, who moved quickly to sign him as a professional in 1946. Strong and well-built, Jones soon made his mark as a highly effective centre-forward and was the leading scorer in the Irish League in the 1947/8 season, his 28 goals helping Celtic to win the league title; he scored 62 goals in all competitions. In 33 league games for the club (1946–8) he scored 43 goals.

His form attracted attention from cross-channel clubs and Celtic turned down an offer of £16,000 from Newcastle United for a player still in his teens. There was also an approach from Celtic’s main rivals Linfield, partly prompted by the fact that Jones was protestant (Church of Ireland). The Linfield secretary Joe Mackey tried to convince him that Windsor Park was his natural home and that he ‘shouldn’t be over there playing with those Taigs’. Jones though was happy at Belfast Celtic, where he maintained that religion was irrelevant: ‘No one cared what you were. I wasn’t interested in hearing that kind of sectarian rubbish and I told him to stuff his money … Mackey never forgave me for that’ (Coyle, 72).

In the 1948/9 season Jones showed no sign of letting up, scoring 27 goals in 19 games, including 6 hat-tricks. Linfield though were three points ahead of Celtic in the league before their much-anticipated derby at Windsor Park on 27 December 1948. The already tense atmosphere was heightened in the first half when Jones collided with the Linfield defender, Bob Bryson, who was carried from the field. During the interval Joe Mackey announced on the public address system that Bryson had suffered a broken leg. This inflamed some home supporters, who became even more aggrieved when another Linfield player was injured and had to retire. Anger on the terraces expressed itself in ever louder abuse of Celtic players, and the ill-feeling spread to the pitch with a player from each side sent off for fighting. Celtic took the lead but Linfield, with only eight players on the field, fought back and scored a late equaliser that prompted wild celebrations, including by RUC men policing the match. When the final whistle sounded, hundreds of Linfield supporters invaded the pitch and attacked the Celtic players; Jones was their main target. Isolated from his fellow players, he was thrown over a pitch-side parapet onto the terracing where he was kicked unconscious. Clearly intent on ending his football career, his attackers jumped heavily on his right leg, breaking it in five places. Sean McCann, a former teammate who fought his way through the crowd to protect him from further injury, recalled that ‘they were kicking him up and down the terrace steps like a rag doll. Jimmy was screaming in pain and I could see his right leg was horribly mangled, his heel sticking out where his toes should have been’ (Coyle, 82). McCann appealed for help to a policeman standing nearby, but was ignored, and no arrests were made. (Before he lost consciousness, Jones recalled hearing a policeman say: ‘stop kicking him or I’ll use my baton’). When Jones was taken to the nearby Musgrave Park Hospital his injuries were so severe that the surgeon who examined his shattered leg thought at first that it would have to be amputated.

Football followers throughout Ireland were appalled at the viciousness of the attack. Celtic supporters advocated a permanent boycott of Windsor Park and the RUC’s failure to protect Jones was raised by nationalist MPs at Stormont. Celtic’s directors were outraged by the assault itself and the IFA’s token sanction against Linfield (Windsor Park was closed for two matches). They believed that if the authorities were not prepared to protect their players from serious violence, they had no choice but to withdraw from the Irish League, which they did in April 1949. Some thought that this was a temporary move, but Celtic never returned and left behind a massive void for its supporters. Jones was deeply saddened by these events, describing the club as ‘the heart and soul of West Belfast’ and its withdrawal as ‘the blackest day in Northern Ireland football history’ (Irish Independent, 21 Dec. 1998).

Four operations by the Belfast orthopaedic surgeon Jimmy Withers (1908–65) saved Jones’s right leg but made it an inch shorter than his left. He was though determined to play football again and embarked on a punishing training programme to regain fitness. He recovered well and in March 1950 was playing for Larne in the Intermediate League. That summer he joined Fulham in the English First Division but made no first-team appearances because of a technical problem with his registration; the fact that he never had a chance to prove himself in England was one of his few regrets. In 1951 Matt Busby tried to sign him for Manchester United but Jones was keen to play first-team football again and returned to his hometown club of Glenavon in Lurgan. Jones’s goals helped Glenavon become the first club from outside Belfast to win the Irish League title in 1952. With other outstanding players such as the inside-forwards Wilbur Cush (1928–81) and Jackie Denver (1926–2013), Glenavon had a decade of unprecedented success, winning the league and IFA cup double in 1957, another league title in 1960, and the IFA cup in 1959 and 1961; in the latter Glenavon beat Linfield 5–1 in the final. There were also wins in the City Cup (1955, 1956, 1961), the Gold Cup (1955, 1957) and the Ulster Cup (1955, 1959) – all valued trophies at the time. The club was the first from the Irish League to compete in the European Cup, against Aarhus of Denmark on 11 September 1957. In his time at Glenavon (1951–62), Jones was the club’s leading scorer for ten successive seasons (1951/2 to 1960/61) and leading Irish League scorer five times (1951/2, 1953/4, 1955/6, 1956/7 and 1959/60), regularly averaging more than a goal a game; in the 1956/7 season he scored a record 74 goals in all competitions. Always modest about his own abilities, he insisted that scoring goals was simply his job. He made 222 league appearances for Glenavon (1951–62), with 269 league goals and 517 in all competitions.

Predictably Jones was a hero to Glenavon supporters, but he was also generally admired for his courageous recovery from injury and hard but fair style of play. Sean McCann recalled that ‘he could score with either foot, climbed above defenders twice his height to head the ball like a bullet, and was the fastest thing on two legs’ (Irish Independent, 21 Dec. 1998). He never shirked a tackle and in one of his first games for Glenavon accidentally broke McCann’s arm when the latter was playing in goal for Ballymena United. A keen motorcyclist, he competed during the summer months in the Ulster Grand Prix, North West 200 and Skerries 100 races, despite the pleas of Glenavon manager Jimmy McAlinden (1917–93) who believed that he took enough punishment on the football field without risking a motorcycle crash.

Although the Northern Ireland team manager Peter Doherty (qv) relied primarily on cross-channel professionals, Jones won three caps for Northern Ireland (1956–7) and scored once. He also played 17 times for the Irish League XI (1948–59), scoring 11 goals, and impressed in the 5–2 victory over the (English) Football League at Windsor Park on 25 April 1956. Many supporters believed that he was unfortunate not to be included in the Northern Ireland squad for the 1958 World Cup in Sweden, particularly as Doherty’s team lacked a goal-scoring centre-forward.

After leaving Glenavon, he added another 8 league goals in 14 appearances for Portadown (1962–3) and 12 in 20 games for Bangor (1963–4). He finished his career with Newry Town (1964–5) in the Irish League B Division. He is the all-time top goal-scorer in Irish League history with 331 league goals and 646 goals in all competitions. After his playing career ended he managed Glenavon (1969–72) but without notable success.

He was never bitter about the Windsor Park attack, which simply confirmed his belief in the corrosive nature of sectarian hatred. Jones became inaugural president of the Belfast Celtic Society in 2003 and was always the first name on its guest list. His name was well-known to many who had never seen him play and featured on murals in west Belfast celebrating Belfast Celtic. In 2001 he and other former Belfast Celtic players were invited to Celtic Park in Glasgow by the Celtic manager Martin O’Neill; O’Neill was thrilled to meet ‘the great Jimmy Jones’ and the players were given a standing ovation by the crowd. In 2011 he was inducted into the Northern Ireland Football Hall of Fame and the Jimmy Jones suite at Glenavon’s Mourneview Stadium was named after him in 2013. After a long illness, he died on 13 February 2014 in Lurgan and was buried in Lurgan cemetery. He was survived by his wife Cecily and children Jennifer and Trevor.