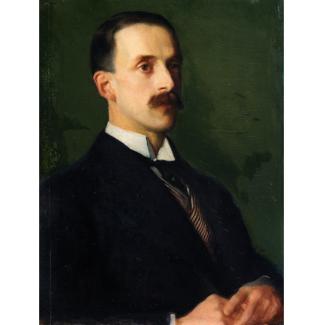 Lane, Sir Hugh Percy (1875–1915), art dealer and collector, was born 9 November 1875 at Ballybrack, Co. Cork, third eldest among five sons and one daughter of the Rev. James Willliam Lane, of Cork, and Frances Adelaide Lane (née Persse), of Roxborough, Co. Galway. Two other daughters died in infancy. Lane's father was from a prominent merchant family in Cork, his mother from an old protestant family with lands in Roscommon and Galway. The Lanes were based first in York and then in Cornwall; but the marriage was an unhappy one, and having spent long periods apart, the parents separated formally in 1893. Lane's childhood was unsettled and he received little formal education, but at an early stage he showed a keen interest in fine arts and for a time became apprenticed to a restorer in Plymouth, where he was living with his mother.

In 1893 Lane was employed as an apprentice dealer with Martin Colnaghi, owner of the Marlborough Gallery, London, which specialised in Old Masters and works from the Barbizon school. He left after just under a year and started buying and selling pictures in his own name, but in 1896 he joined another dealer, E. Trevelyan Turner, who operated from the Carlton Gallery on Pall Mall. In February 1898 Lane opened his own establishment in a small room at 2 Pall Mall Place, where he made a name for himself as an expert in Old Masters. In order to supplement his knowledge, he made extensive trips around Europe in 1895 and 1899. By the turn of the century he had made a considerable fortune as an art dealer. He left his premises at Pall Mall and moved first to 43 Duke St. and then 93 Jermyn St., from where he dealt.

Around 1900 Lane went to stay with his aunt, Lady Gregory (qv), at Coole Park where he met members of her circle including W. B. Yeats (qv), Edward Martyn (qv), and Douglas Hyde (qv). In 1901 an exhibition of works by Nathaniel Hone (qv) and John Butler Yeats (qv), organised by Sarah Purser (qv) at 6 St Stephens Green, excited his interest in Irish art and he bought a number of paintings by both artists. Lane was to patronise many artists, including John Butler Yeats, William Orpen (qv) (a distant cousin), Augustus John, and Gerald Kelly. In the winter of 1902 he organised an exhibition of Old Master paintings in the Royal Hibernian Academy's premises on Lower Abbey St. The following year Lane was appointed to the board of the NGI.

In early 1904 Lane became involved in organising an exhibition of Irish art, as part of the World's Fair at St Louis in the US. When the event was cancelled at short notice Lane brought the exhibition to the Guildhall Art Gallery in London, where it opened on 30 May 1904 and ran for eight weeks. While Lane was organising this exhibition, his ideas for a gallery of modern art in Dublin were formulated. In November he organised a further exhibition at the RHA, featuring works from the estate of the collector James Staats Forbes, some impressionist works on loan from the dealer Paul Durand-Ruel, and works from Lane's own private collection. Following this exhibition Lane set up the Modern Art Gallery Committee. Dublin corporation agreed to provide £500 a year to maintain the gallery. By early 1906 the basis of the collection had been formed with 114 pictures and pieces of sculpture, bought or promised to the prospective gallery. Lane agreed to donate a number of his own paintings on condition that a suitable gallery was found within two months. It was to take two years, but during this time Lane continued to add to the collection. Lane's interests extended beyond Dublin and he also organised an exhibition of art for the Belfast Municipal Gallery and became involved in a project to establish art galleries in Johannesburg and Cape Town.

The Municipal Gallery of Modern Art opened in temporary premises at 17 Harcourt St., Dublin, on 20 January 1908 and included works by Irish, British, and French artists. In the same year Lane was elected an honorary freeman of the city and appointed a member of the governing body of UCD. In 1909 Lane received a knighthood from the king for his services to art. He continued to deal in London and bought Lindsey House in Chelsea, where he lived for the rest of his life. Lane never married, but in the summer of 1911 became engaged briefly to Lady Clare, daughter of Hugh Annesley (qv), 5th earl of Annesley.

In November 1912 Lane handed over the paintings known as the ‘Lane gift’ to the town clerk of Dublin, on condition that the works be always on view free to the public. He was, however, growing increasingly frustrated with Dublin corporation; another group of works known as the ‘Lane collection’ was to be removed at the end of January 1913 if a suitable building for the gallery was not provided. In response, the lord mayor established a committee for the provision of a permanent municipal art gallery. A number of different sites were proposed by the corporation but rejected by Lane. The British architect Edwin Lutyens designed a gallery on a bridge over the Liffey for Lane, but the corporation rejected this plan. They eventually voted that the location and design of the gallery should be left to them. As a result, in 1913 Lane removed the conditional gift pictures (including works by Monet, Manet, Renoir, Sisley, Degas, and Pissarro) from the Municipal Gallery. Later that year he made a new will in which he left the original conditional gift of paintings ‘to found a collection of modern continental art in London’. Returning from a trip to New York, Lane was drowned while aboard the Lusitania, which was torpedoed off the coast of Cork on 7 May 1915. His body was never found. After Lane's death, an unwitnessed codicil to his will was found in the drawer of his desk at the NGI, where he had been appointed director in 1914. The codicil left the paintings at the National Gallery, London, to the city of Dublin, on the condition that a building was provided for them within five years of Lane's death; but under British law the codicil was deemed invalid. Controversy over the ownership of the Lane collection continued until 1959, when an agreement was made between the National Gallery, London, and the Dublin gallery, which sees the paintings alternate between the two. It was subsequently revised in 1979 and 1993. In 1933 the Municipal Gallery of Modern Art opened at Charlemont House, Parnell Square, where it remains. The gallery was renamed the Hugh Lane Municipal Gallery of Modern Art in 1975 and Dublin City Gallery The Hugh Lane in 2004. Lane's papers are in the NLI, the NGI, and Dublin City Gallery The Hugh Lane.