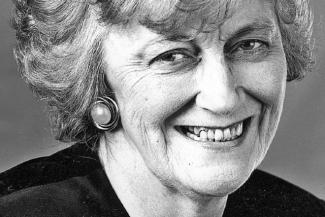 Lavinia Loughridge
Copyright
Fair use. Published in The Times and BMJ without credit.

Loughridge, Lavinia Winifred (1930–2014), nephrologist and physician, was born on 20 May 1930 in Templepatrick, Co. Antrim, the younger of two children of John (‘Jack’) Carson Loughridge, a dispensary doctor in the town, and his wife Winifred Elizabeth Loughridge (née Wallace). Her elder brother Ian also became a doctor. After their father died in a road accident in December 1934, they were raised by their mother, a talented musician, who passed on to Lavinia a love of the piano. A severe bout of tuberculosis kept her out of school for a year when she was nine. Afterwards she attended Victoria College Belfast where she excelled academically, was captain of the hockey and tennis teams, and head girl.

After strongly considering training to become a concert pianist, she took up a scholarship to study medicine at QUB in 1948. One of fifteen women in a class of 100, she won several prizes and graduated with first class honours in 1954. She then trained for a year at the Royal Victoria Hospital (RVH), Belfast, before moving to London in 1955 to become a house physician at the Hammersmith Hospital. In 1956 she gained membership of the Royal College of Physicians (RCP), London. Returning to the RVH for a year as medical registrar and a tutor in medicine (1956–7), she assumed the same posts in 1957 at the prestigious Royal Postgraduate Medical School, based at Hammersmith Hospital. There she collaborated on a 1957 British Medical Journal (BMJ) research paper with Christopher Booth, later knighted as a leading physician, whom she married in 1959; they had a boy and a girl together, though soon divorced. In 1959 Loughridge turned down the offer of a newly created lectureship in renal medicine at the Royal Free Hospital, London, but continued to lecture in medicine at the Postgraduate Medical School and publish important research.

In 1961 she was the first woman to be appointed a consultant at Westminster Hospital, London. She was seven months pregnant at the time of her interview and when asked if she was married, reportedly replied ‘Fortunately, yes!’. Finding the consultant’s dining room at Westminster reserved for men, she sat outside the entrance eating sandwiches during lunch until the rules were changed and to allow her in. She became a lecturer in medicine and a senior lecturer from 1971. With Malcolm Milne, she co-wrote several papers and established an academic department of nephrology which investigated new approaches to kidney dialysis. She was part of the team which undertook pioneering donor kidney transplants (using organs taken from corpses) at Westminster Hospital.

Loughridge was an early expert in both novel approaches to immunosuppression and the benefits of pre-operative dialysis in transplant patients, and co-wrote an important 1963 paper (‘Renal transplantation in man: a report of five cases, using cadaveric donors’, BMJ, 14 Sept. 1963) which demonstrated the ability of a combination of immunosuppressant drugs to prevent a patient’s immune system from rejecting a donated organ. This was a significant milestone, as previously transplants had only taken place between blood relatives. In 1966 she co-wrote a follow-up study which found that combining pre-operative dialysis and immunosuppression greatly improved the survival rates of kidney transplant patients. She made significant contributions to the medical literature in these two novel areas of nephrology. On continual call for her renal patients, she raised two young children with the assistance of live-in nannies at her home in Twickenham, London. In the 1970s she stopped publishing research and became a general physician, switching focus to clinical practice and teaching, and was elected FRCP in 1973.

As assistant dean for clinical admissions at Westminster, she was formal, focused and always meticulous and well-prepared, and regarded with great warmth and respect by the early-career physicians she mentored. A superb teacher and a rigorous examiner demanding the highest standards of candidates, she once failed the entire class at an exam. Other positions she held included senior lecturer in medicine at the Charing Cross and Westminster Medical School, and censor (examiner) at the RCP from 1987–8. She was elected academic vice-president and senior censor (1993–5) of the RCP, only the second woman so honoured.

Loughridge was regarded as a leading physician by her peers and was widely sought out by them for a second opinion. Continuing full-time work after her divorce from Booth, she was devoted to their two children, which inhibited her ability to travel to medical conferences around the world. While visiting the USA in 1986, she looked up John Bunker, a pre-eminent anaesthesiologist whom she had first met when he was on a sabbatical at Westminster Hospital in the 1960s. They renewed their friendship and married on 25 March 1989 in London. Devoted to each other, they enjoyed chamber music, opera and visiting art galleries together. Loughridge retired from the National Health Service in 1995, but for a time continued to see patients at the private Cromwell Hospital in London. She resumed the piano, practising for hours daily, and played tennis well into her seventies. After a long illness she died on 22 March 2014 at home in London. Bunker had predeceased her in 2012.