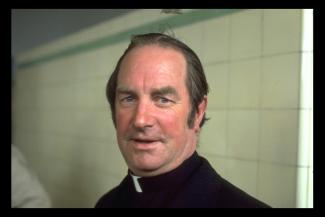 Maher, Fr Tommy (1922–2015), hurling coach, was born 25 April 1922, the youngest of eleven children of John Maher a smallholding farmer from Whitepark, near Gowran, Co. Kilkenny, and his wife Annie (née Fowler), also from Whitepark. Four of his siblings had died before he was born, two of them in the one week in 1912, and he was orphaned at the age of five. His uncle, Thomas Maher, stepped in to manage the farm and to look after his nephews and nieces. Tommy attended a three-teacher school nearby in Dungarvan, Co. Kilkenny.

By the time Maher reached adolescence, two of his older brothers were earning enough to pay for him to go to the diocesan seminary, St Kieran’s College in Kilkenny city. There, he excelled both as a student and on the hurling field, winning three Leinster senior colleges medals with his school (1939–41), playing variously as a right-half forward, in midfield and in goal. The future Wexford hurling star Nicky Rackard (qv) was a teammate, and they would remain lifelong friends. Contemporaries describe Maher as a fast, elusive and sporting player, but lacking in height and strength. Sitting the leaving certificate exams in 1941, he obtained six honours and was one of the local bishop’s two nominees to study for the priesthood at the national seminary, St Patrick’s College in Maynooth, Co. Kildare.

For the next six years, he hurled for local clubs during summers spent at home. In 1945 his form for the Glen Rovers club earned him a call up to the Kilkenny senior team for the All-Ireland final against Tipperary. Lining out at left-half forward, he scored the first point of the match, but Tipperary won comfortably. It was his first and only intercounty match, though he continued playing club hurling until 1947, latterly for Thomastown. His outlook on hurling was informed partly by his experience of Kilkenny’s preparations for the 1945 All-Ireland final. The regime consisted of laps of Nowlan Park followed by a practice match. Seeing the steam rising off his colleagues after their exertions, he concluded that there had to be a better way.

After being ordained in 1948, his first posting was as chaplain at Sion Hill convent in Blackrock, Co. Dublin. From 1949 he served as a curate in Crumlin, Dublin, where he became involved as a trainer at the local hurling club. Returning temporarily to St Kieran’s in 1953 to teach English, he moved there permanently in 1955 as a teacher of maths and junior dean. He coached the St Kieran’s hurling team to senior colleges All-Ireland titles in 1957, 1959 and 1961, following which he stepped back from the role. Both as junior dean and as a hurling coach, he was noted for being a mentor rather than a martinet: he did not believe in hitting or shouting at his charges. He was appointed as professor in St Kieran’s in 1960 and then president of the college in 1973, overseeing its bicentenary celebrations in 1982.

In 1957 Maher took over the Kilkenny hurlers at a time when the game was in the doldrums locally, the county having won only one All-Ireland since 1939. He was really the coach, but the term was frowned on as smacking of professionalism and ‘trainer’ he would remain for the next twenty-one years. Throughout this time, he neither sought nor was given any role in the selection of the team, and he was not always well served by the team selectors. His initial discovery on taking charge of the team was that nobody had ever put any effort into coaching them in skills or methods or combination play: ‘They were just put out on the field and they pucked around or played backs and forwards’ (The godfather of modern hurling, 65).

At the first training session he put the players in lanes and had them hit the ball first time. The Maher credo was uncomplicated: the key to success was not fitness or even tactics but technique honed by diligent practice. While he was a fan of the handpass as a way of getting out of tight corners, he never ceased to remind his players that the ball travels faster than any man. The simplest solution was usually the best, and it was no coincidence that Maher was a maths teacher. Similarly, he encouraged tactical puckouts, aimed at picking out a man, but not short puckouts, which he regarded as too risky. The corner-forwards were instructed that their first duty was to keep the sliotar in play on the basis that letting it out over the endline meant giving possession away. The importance of watching the opposition goalkeeper while he took a puckout was another refrain, given that a puckout would inevitably go astray at some stage.

There was individual advice for individual players. Tom Walsh, a member of his 1957 Kilkenny team, was staggered on hearing that his left side was not as good as his right and that he should improve it; being told to work on a particular skill was novel. Likewise, years later, Nicky Orr, full-back on Kilkenny’s All-Ireland-winning combination of 1974–5, frequently came up against Wexford’s formidable Tony Doran and was counselled by Maher to avoid trying to make a name for himself: ‘Don’t go out. Because if you go out and clear this great ball there’ll be this big cheer. But if Doran or someone sticks one in the net there’ll be a far bigger cheer. Make sure your man doesn’t get the ball’ (Irish Examiner, 15 July 2022). Orr chafed at the instruction, but hindsight changed his view.

Kilkenny triumphed in the 1957 All-Ireland final, defeating Wexford 4–10 to 3–12 in a classic encounter. In his match report, John D. Hickey of the Irish Independent described the ‘bamboozling’ attacking play of the new champions: ‘Their forwards were experts at finding the unmarked man as they switched the direction of the attack in most baffling fashion’ (Irish Independent, 2 Sept. 1957). This was new hurling, bracing and imaginative, and it was the product of enlightened coaching.

His second All-Ireland winning team, that of 1963, featured Eddie Keher, his former wunderkind from St Kieran’s. Keher could not have gone on to create scoring records that stood for decades were it not for the guidance of his old mentor, who deconstructed the free taking process and helped Keher build his technique. The foundation stone was the simple task of rising the sliotar correctly. The other elements of the process – clean connection, follow-through and accuracy – all flowed from this.

During his twenty-one years in charge of the Kilkenny hurlers, Maher led them to fourteen All-Ireland finals, winning seven (1957, 1963, 1967, 1969, 1972, 1974 and 1975). The most treasured of these victories was probably that over Kilkenny’s historic bogey team, Tipperary, in the 1967 final; the most thrilling was the high-scoring victory over Cork in the 1972 decider. Under his guidance Kilkenny also won fourteen Leinster championships and three National Hurling League titles (1962, 1966 and 1976).

Yet there was far more to his legacy than the accumulation of silverware. The then-uncommon emphasis he placed on practising the skills, and his encouragement of thinking man’s hurling, lived on after him. Each of Kilkenny’s All-Ireland-winning managers between his intercounty retirement in 1978 and the second decade of the twenty-first century were men who wore the black and amber under him: Pat Henderson, Eddie Keher, Ollie Walsh and Brian Cody. His contribution to hurling nationally was also significant. Along with Donie Nealon and Des Ferguson, he was one of the midwives of the seminal Gormanston coaching course, which began in 1965. The seeds sown in Gormanston led to the breakthroughs made by Galway and Offaly in the 1980s, and even to Clare’s rise in the 1990s.

Never comfortable in a college president role that was too formal for someone who thrived while working closely with and improving individuals, he moved to Mullinavat as parish priest in 1983. There his calling reached its fullness. He came to love the south Kilkenny parish and in return was an adored pastor. In 1984 he coached the Mullinavat hurlers to the Kilkenny junior championship. He stepped down as parish priest in 1998, after which he remained in Mullinavat as pastor emeritus.

He was not an obviously remarkable individual. On the one hand he was a teacher, an educator, a mathematician, an analyst and an inspiring motivational speaker. On the other he was a humble man, a man of God, a believer in the virtues of hard work and a son of the soil, never happier than when he was out in the fields on the family farm. The work ethic acquired in childhood never left him and was in evidence during a FÁS scheme that took place on parish property in Mullinavat: one morning one of the two young employees was out sick whereupon Maher stepped into the breach; the pair of them were still labouring away at teatime. In his personal habits he was spartan, his sweet tooth (Scots Clan toffee was a favourite) and partiality to a drop of whiskey or gin aside. Food-wise, enough was as good as a feast.

After being taken ill in 1999, he retired from his ministry at Mullinavat in 2002. He spent his final years in Archersrath Nursing Home outside Kilkenny, where he died on 25 March 2015. He was buried in St Beacon’s Church cemetery, Mullinavat. A practical, low-key hurling visionary, Fr Tommy Maher was one of the most significant figures in the history of the game.