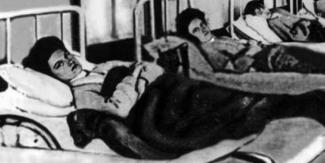 Mary Mallon lies in a hospital bed after being apprehended by the authorities in 1907 for being a carrier of typhoid fever, 'New York American', 20 June 1909
Copyright
Fair use

Mallon, Mary (‘Typhoid Mary’) (1869–1938), domestic cook and notorious carrier of typhoid fever, was probably born 23 September 1869 in Cookstown, Co. Tyrone, daughter of John Mallon and Catherine Mallon (née Igo), and probably attended national school locally. Emigrating to the USA at age 14, she lived with an aunt in New York city and entered domestic service. By 1897 she was working regularly as a cook in the households of wealthy New Yorkers, and enjoying a good reputation for her skills. In August 1906 she was employed in the Long Island summer residence of a NY banker when six members of the household fell ill with typhoid fever, a disease then afflicting several thousand New Yorkers yearly, with a 10 per cent rate of fatality. Over ensuing months, after Mallon had left the family, a privately engaged epidemiological investigator, George Soper (after eliminating such usual causes of typhoid-fever transmission as contact with sufferers, or consumption of contaminated water, food, or milk), pursued the idea that a healthy person carrying the disease might have infected the victims – a radically new theory of disease transmission known to him from European medical literature, but as yet not widely current among American professionals, let alone the general public. Tracing Mallon's employment history, Soper ascertained that typhoid fever had visited seven households in which she had worked from 1900, claiming twenty-two victims, of whom one had died. In March 1907 he appeared without warning at the Park Ave. townhouse of her current employer, confronted her with the assertion that she was sickening people with typhoid through her cookery, and requested samples of her blood, faeces, and urine for laboratory examination. Outraged and incredulous, Mallon chased him from the house with a carving fork. After rebuffing subsequent approaches by Soper and by a city health department medical inspector, Mallon, offering spirited resistance, was forcibly apprehended by police and detained in hospital. Laboratory tests determined that she was an intermittent carrier of typhoid bacilli, which she harboured in her gall bladder, excreted in her faeces, and transmitted through unwashed hands to foods she prepared, thereby infecting others. Removed to Riverside isolation hospital on North Brother island in the East River, treated ineffectually for her condition with various drug therapies, Mallon lived alone in a one-room cottage on the grounds.

In June 1909 she came dramatically to public attention through a feature story in William Randolph Hearst's New York American that preceded judicial hearings on a writ of habeas corpus seeking her release from involuntary detention. Ruling that health authorities had acted within their legitimate powers in isolating, indefinitely and without due process, a healthy but infectious individual, the NY supreme court remanded Mallon back to her island quarantine. Journalists, led by the initial American story, while identifying her by name, also applied the emotive agnomen ‘Typhoid Mary’ – previously a coinage within the medical community in anonymous discussions of the case. In February 1910 she was released from quarantine after agreeing by affidavit to change occupation and take consistent hygienic precautions – a policy towards healthy typhoid carriers consistent with the advancing majority opinion among public health experts. Given work in a NY laundry, Mallon resented the lowered status, reduced wages, and physical rigours of this and similar labour, and sometime after September 1912 returned to cooking. In March 1915 she was discovered working under an alias as cook at Sloane maternity hospital, location of a recent outbreak of twenty-five typhoid cases among staff, including two deaths. Amid huge public indignation, fuelled by a universally hostile press charging deliberate and callous violation of trust to the hazard of innocent others, Mallon was returned to Riverside for the remaining twenty-three years of her life. Living alone in her cottage, she was allowed free circulation through the grounds and contact with other residents and staff. From 1918 she was employed by the hospital, first as a domestic helper, then as general assistant in the bacteriology laboratory, and was granted day trips off the island. Unmarried, at the time of her 1907 apprehension Mallon was living with a male companion, A. Briehof; on his death (between 1910 and 1914) she was left without immediate family in America. A stroke suffered in December 1932 left her paralysed and bedridden until her death on 11 November 1938.

Mallon probably contracted typhoid via a mild, perhaps sub-clinical, episode of the disease. Never accepting the scientific contention that she, a healthy person never known to have suffered from typhoid, could be infecting others, she consequently never accepted the necessity of abiding within imposed restrictions. Both the draconian imposition of lifelong detention and the public notoriety as ‘Typhoid Mary’ were grossly disproportionate to the objective circumstances of her case, which were in no respect singular. As the first identified healthy typhoid carrier in North America, and the most widely and sensationally publicised, she alone among tens of thousands of identified carriers – many of whom likewise resisted cooperation, or persisted in food-handling occupations, or infected far more prolifically than she – endured permanent quarantine. Her circumstances were compounded by factors of ethnicity, social class, and gender: a foreign-born agent of contagion, a servant infecting the domiciles of the respectable, a firm-willed female who, through misfortune compounded by obstinacy, defiled woman's assigned social role as nurturer and keeper of the wholesome hearth. While specifically anti-Irish biases influenced attitudes of individual public health officers and aspects of her public image, Mallon's case did not produce wholesale recriminations against the Irish as a community (such as those visited on Asians in San Francisco during a 1900 outbreak of bubonic plague), and thus exemplifies increased social assimilation and geographic dispersal.

Both the history of the real Mary Mallon and the myth of ‘Typhoid Mary’ haunt the American psyche, addressing fears of unsuspected contagion, and raising intractable issues regarding the authority of the state in safeguarding public health, and the rights and responsibilities of infectious individuals. Mallon's legacy thus represents a confluence of, and conflict between, two powerful impulses of American popular culture: the libertarian and the valetudinarian. The term ‘Typhoid Mary’ has entered the American lexicon, signifying not only a hidden bearer of disease, but also, metaphorically, a clandestine agent of any category of evil.