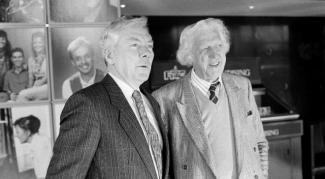 McAughtry, Sam (1921–2014), writer and broadcaster, was born on 24 March 1921 in the Tiger’s Bay area of north Belfast, the son of Marriott ‘Mark’ McAughtry (1882–1951), a merchant seaman, and his wife Elizabeth ‘Lizzie’ (née Condit). Sam was the sixth of ten children, four of whom died in infancy. Tiger’s Bay was predominantly loyalist and protestant and the McAughtrys were Church of Ireland, his mother devout and his father indifferent. Sam’s maternal grandfather was a catholic and he had three catholic uncles, one of whom he saw burned out of his home in Collyer Street in Tiger’s Bay by protestant neighbours in 1935. Educated locally at St Barnabas’ school in York Street, he left aged fourteen and later described his schooling as designed ‘to turn out unskilled workers who could count and write and know enough to carry out orders but not enough to question them’ (On the outside, 135). Afterwards he worked in various jobs, including as a rivetter in Short and Harland’s aircraft factory.

He had long dreamed of going to sea and in early 1940 was offered a place on the merchant ship the Kenbane Head with his older brother Mart. He declined because he had already applied to join the RAF and in February 1940 was assigned to groundcrew duties. While based in England he heard of Mart’s death after his ship was sunk by the German battleship the Admiral Scheer in the North Atlantic in November 1940. Partly to avenge Mart’s death, he applied for aircrew training and, despite a patchy service record that indicated some difficulties with authority, was finally accepted in November 1941 and for the next two years trained as a radio operator and navigator. He was promoted to flight sergeant and in December 1943 was assigned as a navigator to a squadron of Bristol Beaufighter strike aircraft near Cairo. Throughout 1944 he flew thirty-seven sorties, attacking enemy ships, harbours and airfields. He was promoted to pilot officer and taken off operations at the end of the year, by which time half of his original squadron was dead. His war memoir (written in 1985) details the boozing and brawling of a young airman’s life but only barely hints at how the experience of combat and the death of comrades affected him. From February 1945 he served as a transport officer in Athens and was demobbed in January 1946 with the rank of flying officer. One lasting result of his RAF service was, he noted, ‘the warm discovery of my Irishness’ (McAughtry’s war, 7). Like most Irish servicemen, he was immediately christened ‘Paddy’ and gravitated to other ‘Paddies’, many from the south, and found he had much in common with them.

After the war he worked as a labourer in London and a car worker in Dagenham before returning to Belfast. He took the entrance exam for the RUC but instead joined the Department of Agriculture in 1947. Civil service employment provided him with security and he married soon afterwards but often felt stifled by the job’s hierarchies and regulations. Becoming involved in the civil service trade union, he edited its magazine, which he used to campaign against grievances such as the dismissal of women on marriage. He also joined the non-sectarian Northern Ireland Labour Party (NILP) and worked hard to broaden its base. He deplored the polarised and poisonous nature of politics in Northern Ireland, which he claimed was dominated by partisan mediocrities who played on the fears of marginalised communities and further entrenched division. Although he supported the union with Britain, believing it was in Northern Ireland’s best interests, he rejected the label of ‘unionist’ and proudly insisted that he had never voted for a unionist candidate. Having grown up in poverty, he found it difficult to see himself as a member of a privileged caste and believed that Labour politics alone offered a way out of the impasse of sectarianism. One of his closest friends was the nationalist politician and trade unionist Paddy Devlin (qv), to whom he dedicated his 2003 memoir.

Editing the union magazine sparked his passion for writing and he also wrote occasionally for local newspapers. Although prone to bouts of heavy drinking, he managed to stay sober for most of the 1960s. In 1968 he was deeply disillusioned by the poor performance of the NILP in the Stormont and local government elections and began drinking again, his depression aggravated by money worries and Northern Ireland’s descent into bloody sectarian violence. By August 1971 he was at a low ebb and was hospitalised for six weeks. After his discharge, he was determined to turn his life around. The family home in Dundonald had been sold and his three daughters farmed out to friends, but normal family life resumed when he and his wife found a new home in Comber, Co. Down, a place he came to love. He stopped drinking and began to write regularly, starting work on his first book, The sinking of the Kenbane Head (1977). This alternated autobiographical chapters with vivid accounts of the early days of the Battle of the Atlantic, in particular the sinking of the ship in which his much-loved brother died, and was considered his best book by many critics. It was published by Blackstaff Press in Belfast, who went on to publish all his books, including Play it again Sam (1978), a collection of his radio sketches; Blind spot (1979), Sam McAughtry’s Belfast (1981) and Hillman Street high roller (1994), collections of stories and reminiscences; the memoirs McAughtry’s war (1985) and On the outside looking in (2003); the travel book Down in the Free State (1987); and the novel Touch and go (1993) – the last favourably reviewed by the imprisoned republican Danny Morrison in Fortnight (Sept. 1993). His writing mined the characters, idiosyncrasies and poverty of working-class Belfast in a style that was direct, gritty and vivid, occasionally sentimental, but also capable of moments of real compassion and tenderness.

The success of Kenbane Head opened up new opportunities and he was invited to broadcast on BBC Radio Ulster. He proved a natural storyteller and in 1978 was asked to perform several pieces for the RTÉ radio programme Sunday miscellany; their homely humour proved highly popular and he became a regular contributor. Having reached the rank of deputy principal in the civil service in 1974, he resigned in 1979 to pursue his other interests. He loved the traditional songs of Belfast and in 1982 recorded the album I’ll tell me ma with the group Fluter’s Five, the songs linked together by stories narrated by McAughtry. Keenly interested in horse-racing, he wrote a weekly column for the Irish Field. From July 1980 he contributed occasionally to the Irish Times and in April 1981, as the republican hunger-strikes intensified the Troubles, he was invited by the paper’s editor Douglas Gageby (qv) to write a regular column to give southern readers a better insight into northern life; it continued until 1987. He was named as columnist of the year in 1986 and awarded an honorary doctorate by NUI Maynooth (1988).

In 1989, at the request of Paddy Devlin, he became founding chairman of the Peace Train Organisation (PTO), set up to protest against the repeated bombing of the Dublin to Belfast railway line; in 1988 alone the service was disrupted on 172 occasions. Devlin had suggested him because he was not identified with any existing political party and was an able media performer known in both north and south. McAughtry held the position until 1996 and was involved in numerous events that sought to highlight the absurdity of disrupting the main rail connection between the two parts of Ireland that republicans sought to unite. He regarded the Troubles as a tragic waste of lives – a ‘squalid murdering match … elevated by so many into a just war’ (On the outside, 85) – and repeatedly called on unionists to negotiate with Sinn Féin to bring the conflict to an end. He also called on unionists to acknowledge the Irish dimension to their identity which he argued would undermine Sinn Féin’s claim ‘that unionists are settlers, mongrels, outsiders, aliens, Brits’ (On the outside, 139). While he warmly welcomed the 1998 Belfast Agreement, he was subsequently dismayed to see that some of its provisions and institutions entrenched sectarianism.

His chairmanship of the PTO raised his profile in the Republic and in February 1996 he stood successfully in a Seanad Éireann by-election with the support of the ‘Rainbow’ coalition government. He was the first person from Northern Ireland to be elected (rather than appointed) to the seanad and held the seat until the change of government in June 1997. In his maiden speech he described himself as ‘a hybrid unionist … happy to live in the United Kingdom but … happier still to be Irish and to proclaim my Irishness … it is my dearest wish to see this island inhabited by five million Irish people, living in two jurisdictions with consent, but with institutions established to emphasise their Irishness’ (Seanad debates, 28 Feb. 1996). He was a popular figure in the seanad where his down-to-earth warmth and wit enlivened proceedings, and his love of horse-racing allowed him to befriend likeminded punters of all parties. He lived for a year in Ringsend in Dublin, a close-knit dockside community that reminded him of Tiger’s Bay. While he enjoyed the openness and friendliness of people in the south, he was often saddened (and occasionally amused) by the common assumption that most northern protestants were religious bigots or ‘no surrender’ diehards.

He generally felt more appreciated in the south than in the north and readily admitted that his reception in Dublin was crucial in bolstering his self-esteem and dispelling the depression he had suffered earlier in life. His most trenchant critics were usually northerners. Some regarded his view of Belfast working-class life as overly cosy and sentimental, and dubbed him ‘Soda-bread Sam’. Others noted that the self-deprecation of his memoirs masked a considerable ego and that events usually unfolded to his credit. Some nationalists claimed that his nostalgic view of Belfast failed to acknowledge the pervasiveness of sectarian discrimination, while unionists believed that his political naivety was exploited by southern politicians. This though rather underestimated his spirited independence, and his outlook had a generosity and humanity often lacking in his detractors.

After a long illness, he died on 28 March 2014 aged ninety-three and was buried in Comber New Cemetery, Co. Down. He was survived by his wife Phyllis (d. 2018) and three daughters, Elaine, Marion and Angela.