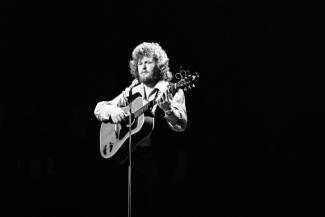 McCann, James (‘Jim’) (1944–2015), singer, was born on 26 October 1944 in Dublin, one of seven children (five sons and two daughters) of Thomas McCann, a schools inspector with the Department of Education, and his wife Winifred (née Murphy). Growing up in the Dublin suburb of Rathgar, he was exposed to song writing and music from an early age – his father had verses of poetry published in newspapers, and had submitted entries, albeit unsuccessfully, to the National Song Contest in both Irish and English. McCann got his first guitar at the age of thirteen, trying to imitate skiffle and rock and roll artists such as Lonnie Donegan, Buddy Holly and Eddie Cochran. After attending Terenure College, he studied medicine at University College Dublin (UCD) and, while looking for holiday work in England, began performing in the folk clubs of Birmingham in the summer of 1965. On his return to Ireland, he dropped out of medicine and became a guitarist for the Ludlow Trio (a folk group named after the Woody Guthrie song, ‘Ludlow massacre’) and began gigging in Dublin. The Ludlows, as they became known, were one of the top Irish folk groups of the time and in March 1966 had their first hit single with Dominic Behan’s (qv) ‘The sea around us’; it reached number one in Ireland, and remained at the top of the charts for four weeks.

The Ludlows disbanded in 1967, and the following year McCann released his first solo single, ‘Some day soon’, written by Canadian folk singer Ian Tyson. It remained one of his favourite songs and he performed it throughout his career. In the summer of 1968 he joined the cast of Maureen Potter’s (qv) ‘Gaels of laughter’ revue at the Gaiety theatre. After a five-month run, he returned to England to tour the folk club circuit and for the next five years performed in both countries. In 1970 he released his first solo album, McCann, which featured original music as well as songs from Joe Babcock and John Sebastian among others; one of the original compositions, ‘Carroll Bawn’, was released as a single. Two years later he released his second album, McCanned, featuring traditional songs such as ‘Ploughboy lads’, alongside contemporary compositions including Ralph McTell’s ‘Streets of London’ and Leonard Cohen’s ‘Hey, that’s no way to say goodbye.’

During this period McCann also made several stage appearances. In March 1973 he began to play the role of Peter in Noel Pearson’s production of the rock opera ‘Jesus Christ superstar’, and forged a career-defining friendship with Luke Kelly (qv), singer with The Dubliners, who played King Herod. In 1978 McCann appeared in the role of the narrator in ‘Joseph and the amazing Technicolor dreamcoat’ at the Gaiety theatre. The following year he performed ‘Mo mhuirnín’, a song written by his father, in the Celtavision Song contest staged in Killarney and televised live on RTÉ. He also hosted several television shows for RTÉ during this period, beginning with a one-off special, ‘Reflections of Jim McCann’. From 1974 he hosted ‘The McCann man’, a series showcasing balladeers and folk musicians and filmed on location across Ireland, England and Scotland. As a testament to their friendship, Luke Kelly appeared on the show on 24 October 1974 performing the Phil Coulter song, ‘Scorn not his simplicity’, the only time he sang the song on air.

In April 1974, during the staging of ‘Jesus Christ superstar’, Dubliners’ singer Ciarán Bourke suffered a brain aneurysm and Luke Kelly invited McCann to take his place temporarily, singing alongside himself and Ronnie Drew (qv). McCann’s tenor proved a good counterfoil to Kelly’s powerful voice and Drew’s gruff baritone, and he took lead vocals on songs such as ‘Carrickfergus’ and ‘Spancil Hill’. By November 1974, when it was clear Bourke would not recover, Drew left the band to pursue a solo career and McCann was invited to become a full-time member, singing alongside Kelly. Between 1974 and 1979 McCann and The Dubliners recorded four studio albums featuring some of their best-known songs, including ‘The wild rover’, ‘Seven drunken nights’ and ‘Black velvet band’. The group toured extensively all over the world, so much so that in 1979 McCann decided to leave and resume his solo career, feeling that six months on the road each year was placing a strain on his home life.

Although he officially left the band, he continued to collaborate regularly with The Dubliners. In 1980, when he released his first solo album in eight years, the self-titled Jim McCann, John Sheahan of The Dubliners played fiddle; while in October 1985 McCann made a guest appearance along with Paddy Reilly when the band played the National Arena as part of the RTÉ series, Festival folk. McCann was part of the celebrations when The Dubliners released their double album, ‘25 years celebration’ in 1987, singing ‘I loved the ground she walked on’, and was also involved in the fortieth anniversary celebrations in 2002 when he and Ronnie Drew took part in the year-long ‘Re-union’ concert tour.

In tandem with his periodic collaborations with The Dubliners, McCann had a successful career as a solo artist. His repertoire was extensive, covering every aspect of traditional folk music from love ballads to rebel songs; and on stage he loved to use his knowledge of Irish history to provide context for his songs. Between 1982 and 2003 he released seven albums, and eleven singles or EPs, the most successful of which was ‘Grace’, a song written by brothers Frank and Seán O’Meara in honour of Grace Gifford (qv), who married Joseph Mary Plunkett (qv) in the chapel at Kilmainham Gaol hours before he was executed for his part in the 1916 rising. McCann sang ‘Grace’ on stage when he appeared with The Dubliners in 1985 and the following year released it as a single to promote his studio album Grace and other Irish love songs. The single spent thirty-six weeks in the Irish charts and, although sung by many artists since, McCann’s version is considered definitive. He also attained gold status for Irish sales with his 1999 album, From Tara to here, which included favourites such as ‘The town I love so well’ and ‘Meet me at the pillar’.

McCann first experienced health problems in 2002 when he joined The Dubliners to celebrate their fortieth anniversary with a year-long tour of Europe. During the tour his voice became increasingly hoarse, which he put down to overuse, but in August that year he was diagnosed with throat cancer. Although the treatment was successful for a time, he was left without a singing voice, but his love of music and performing remained: he travelled with The Dubliners taking photographs, acting as a compère and, for their final concert in December 2012 he performed with them on the guitar.

Jim McCann died on 5 March 2015 at his home in Goatstown, Dublin. After a humanist ceremony in the Victorian Chapel, he was cremated at Mount Jerome crematorium, Dublin. He was survived by Phyl (Philomena) McCann (née Doyle) his wife of forty-three years, as well as his four brothers and sister. Among the hundreds who attended the funeral were old friends, colleagues and collaborators such as Shay Healy and Phil Coulter, the latter describing McCann as ‘one of the last great balladeers’ (Irish Times, 10 Mar. 2015). Renowned for his wit and sense of fun, McCann had completed a book just before his death on former Dubliners band member Barney McKenna (qv), famous for his quirky utterances, termed ‘Barneyisms’. McCann’s An obstacle confusion: the wonderful world of Barney McKenna, an affectionate tribute to his much-loved friend, was published posthumously in 2015.