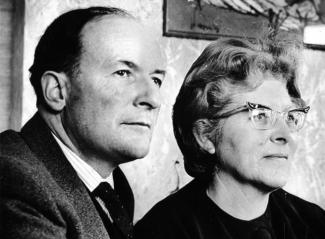 Conn and Patricia McCluskey in the 1960s
Copyright
Public domain

McCluskey, Constantine Mary (‘Conn’) (1915–2013), medical doctor and civil rights campaigner, was born on 19 February 1915 in Warrenpoint, Co. Down, the elder of two sons of John Montague McCluskey, a farmer, and his wife Anne (née Hughes), also from a farming family. Conn attended primary school locally followed by secondary at St Colman’s College, Newry, and Blackrock College, Co. Dublin. After school he studied medicine at UCD where he graduated MB, B.Ch. He went to work for a time in the north of England, before taking a general practice position in Keady, Co. Armagh.

Patricia McCluskey (1914–2010), civil rights campaigner, was born on 17 March 1914 in Portadown, Co. Armagh, to Peter McShane, a draper, and his wife Kathleen (née Fearon). Patricia trained as a home economics teacher before taking a job as a social worker with disadvantaged children in the slums of Glasgow. At the beginning of the second world war, she was involved in evacuating children from urban to rural areas. She met Conn McCluskey while on a trip home in 1940 and they married in November 1941, having three daughters: Sheila, Margaret and Darine. The McCluskeys lived first in Keady before moving to Dungannon, Co. Tyrone, where Conn secured a new general practice position.

In the course of his work in Dungannon Conn encountered many catholic families living in substandard, overcrowded conditions – including large families forced to share one-room bedsits. Between 1945 and 1963, the unionist controlled Dungannon Urban Council had allocated 264 houses to protestant families and just 34 to catholic families. At this time catholics were the majority population in Dungannon by a slight margin, but voting restrictions and gerrymandering ensured unionist dominance. In early 1963 the McCluskeys helped to establish the Homeless Citizens’ League, a women-led organisation that lobbied for fair treatment of the local catholic population in the allocation of public housing. League members and their families occupied thirty-five prefabricated bungalows in Fairmount Park which had been vacated by protestant newlyweds who had recently been allocated new council-built houses. They also picketed the council’s offices and staged what is considered by some to be the first protest march of the civil rights movement in Northern Ireland in June 1963 in Dungannon. Conn and Patricia focused on gathering statistical evidence to demonstrate the discrimination against catholic families in housing allocation. Ultimately their data and the actions of the Homeless Citizens’ League forced the council to agree to build new council homes to accommodate the squatters of Fairmount Park.

After the success of the Homeless Citizens’ League, the McCluskeys launched the Campaign for Social Justice (CSJ) in January 1964, with Patricia as its chair. Headquartered at the couple’s home in Castlefields, Dungannon, the CSJ sought to systematically document the housing and employment discrimination experienced by the broader catholic minority across Northern Ireland (then around one-third of the population). The CSJ’s committee was comprised of middle-class activists: councillors and teachers, medical and business professionals. It framed the catholic population of Northern Ireland as British citizens under the existing constitutional settlement and thus entitled to the same rights as all other British citizens and, without reference to nationalism or reunification, focused its lobbying efforts on sympathetic British politicians. The organisation’s influential publication, The Plain Truth, collated extensive evidence of discrimination against catholics and was widely circulated nationally and internationally. According to former SDLP MLA Bríd Rodgers, the publication provided for the first time ‘incontrovertible and incontestable evidence of blatant discrimination against the nationalist community’. Rodgers also asserted that upon launching the CSJ the McCluskeys were ‘threatened and slandered, even cajoled by surrogates of unionist politicians’, and that Conn ‘had reason to fear for his life as he travelled the country roads at night responding to emergency calls’ (The Irish News, 14 Aug. 2018).

In May 1964 Patricia was one of four members of the CSJ elected to the unionist dominated Dungannon Urban Council. She held her councillor role for nearly ten years and used her platform to campaign against housing and employment discrimination and electoral gerrymandering. In March 1965 she presented the CSJ’s data to the National Council for Civil Liberties in London, and the following year in November 1966, addressed a rally in Manchester organised by the Campaign for Democracy in Ulster. The CSJ was the forerunner to the Northern Ireland Civil Rights Association (NICRA) established in Belfast in April in 1967. NICRA’s aim was similarly to document and lobby against discrimination against the catholic minority in the areas of voting rights – its objectives included allowing everyone over the age of eighteen a vote; an end to gerrymandering; the removal of the ‘business vote’ that allowed business owners multiple ballots; ending discrimination in the allocation of government jobs; fairer access to public housing; removal of the Special Powers Act (1922); and disbandment of the Ulster Special Constabulary (B-Specials).

Intended as a non-partisan organisation, NICRA was initially comprised of trade unionists, communist and other left-leaning activists, and republicans. It also included a small number of unionists. Conn McCluskey was elected vice-chair on NICRA’s first thirteen-member steering committee, which also included Betty Sinclair (qv), Paddy Devlin (qv) and Billy McMillen (qv). Inspired by the American civil rights movement, NICRA employed marches, pickets and sit-ins to pressure the government of Northern Ireland. Along with the CSJ and other groups, NICRA held the ‘first’ civil rights march in Northern Ireland from Coalisland to Dungannon to demand fair treatment of catholics in the allocation of public housing in Co. Tyrone. (The Homeless Citizens’ League march in 1963 can also lay claim to being the ‘first’ such march, though the Coalisland to Dungannon event was on a much larger scale and garnered considerably more attention.)

Following the CSJ’s example, NICRA demanded the realisation of the rights of Northern Ireland’s catholic minority as British citizens. Members of NICRA were not required to accept Northern Ireland’s status as part of the UK, but rather to be pragmatic in how it could be applied to improve the lot of those suffering discrimination. From the beginning there were internal disagreements between the more militantly minded, and the slow-and-steady pacifist wing, to which Conn and Patricia McCluskey belonged. The involvement of republicans (for example, IRA chief of staff Cathal Goulding (qv), and members of groups including the Irish National Foresters and the Wolfe Tone Society) also gave the government and unionists the opportunity to label NICRA an IRA cover organisation. A second march, organised with the Derry Housing Action Committee on 5 October 1968, was banned by William Craig (qv), then Minister for Home Affairs, and members of the NICRA executive withdrew their support for the march, which went ahead but was quickly stopped by the RUC, who beat several marchers with batons. The police attack on unarmed protestors, including elected politicians (the Republican Labour MP Gerry Fitt (qv) was hospitalised), received damning media attention. In the aftermath, the NICRA executive declared a temporary hiatus on marches until January 1969. Throughout 1969, the situation devolved further, with the Battle of the Bogside (12–14 August) in Derry and subsequent rioting in nationalist areas in which at least seven people were killed, many more wounded, and thousands of catholics forced to flee their homes.

By the end of 1969, the ideological divide at NICRA, which was increasingly dominated by the Official IRA and Official Sinn Féin, led to three members of executive: Conn McCluskey, Bríd Rodgers and John Donaghy, issuing a statement to confirm their non-partisan positions, independent from any specific political groups, and spoke of the ‘inherent divisiveness’ of such groups within NICRA. They urged their members and supporters not to take part in further demonstrations, stating, ‘If it becomes apparent that true equality for all is not forthcoming we will advocate a return to the streets.’ (Irish Independent, 5 Dec. 1969)

With the introduction of internment in August 1971, NICRA’s focus shifted to anti-internment actions and marches. Members participated in the mass anti-internment march in Derry on 30 January 1972, now known as ‘Bloody Sunday’, in which fourteen unarmed protestors were killed by British troops. The event effectively brought about the end of the already diminished NICRA.

Conn was part of a small delegation that travelled to Washington DC in March 1972. Along with Fr Denis Faul (qv) and East Tyrone MP Austin Currie (1939–2021), he addressed the European sub-committee of the Foreign Affairs Committee of the US Congress on the civil rights situation in Northern Ireland. Introducing him at the hearing, Irish-born lawyer, activist and politician, Paul O’Dwyer (qv) paid Conn this tribute: ‘In every great movement there is one outstanding leader whose intelligence, scholarship, courage, foresight and dedication brings him to the forefront. Conn McCluskey is such a person’ (Western People, 11 Mar. 1972).

From the mid-1970s, the McCluskeys largely withdrew from public life, believing that the elected representatives of the SDLP (formed in 1970) were better placed to pursue their peaceful civil rights agenda into the future. In March 1973 the Campaign for Social Justice was disbanded, and that same year Patricia did not contest the local elections. Conn continued to run his busy Dungannon practice, while Patricia remained active in the community. In 1989 Conn published Up off their knees which offered a first-hand account of the activities of the Homeless Citizens’ League, CSJ and NICRA, as well as commentary on Paisleyism and paramilitary groups.

Conn was a talented photographer and sculptor. Exhibiting his sculptural work under the name Constantin Cluskey, his pieces often referenced the struggle for justice in Northern Ireland. After he retired, he and Patricia travelled extensively. They sold their home in Dungannon and purchased a house in Foxrock, Co. Dublin, and another in Belfast, dividing their time between the two cities.

Patricia died on 9 December 2010 aged ninety-six. After a funeral mass at the Church of Our Lady of Perpetual Succour in Foxrock, Dublin, her remains were buried at Saint Mary’s Cemetery, Burren, Co. Down. Conn died three years later on 16 December 2013 aged ninety-eight years, and was buried with Patricia. The couple were married for sixty-nine years. Writing about the McCluskey’s legacy in 2018, Bríd Rodgers noted, ‘Many of the younger generation may not realise that in some measure they owe the status of equality that they now take for granted to the sacrifices of a general practitioner in Dungannon and his wife.’ (The Irish News, 14 Aug. 2018)