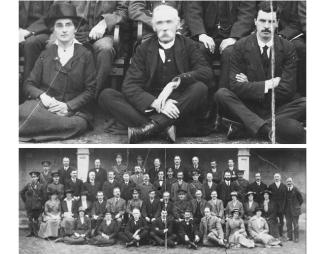 McGinn, Michael (‘Mick’) (1850/51–1916), Fenian, was born in Omagh, Co. Tyrone, the third eldest of nine children of Michael McGinn, a baker at High Street, Omagh, and his wife Jane McGinn (née Conway). His father was active in nationalist and agrarian politics and promoted, among other causes, the newly formed Irish Tenant League in 1850; he also served as a town commissioner for a period until June 1860. Little is known of McGinn’s early life, though he seems to have been well-educated. He worked as a baker at the family business in High Street, and later John Street, Omagh, until 1890; Dan Hackett, who took over the High Street bakery, subsequently employed him. In 1895 he was bequeathed a farm at Dergmoney Lower, outside Omagh, where he was living. The following year, he married Catherine (‘Kate’) Love (1865–1951), from Enniskillen, Co. Fermanagh. The couple had three children: sons Michael Conway (‘Con’) McGinn born in Omagh (1897–1960) and Patrick Romauld (‘Rommy’) born in Dublin (1899–1954), and a daughter, Kathleen Sheila (‘Sheila’) (1900–1929), also born in Dublin.

McGinn joined the Irish Republican Brotherhood (IRB) at an early age and became the county centre in Tyrone in the early 1870s. His known memberships of nationalist organisations (mostly in Tyrone), include the Land League, of which he was founder/organiser in the county in 1879; the Irish National League, a branch of which he helped establish in 1882 and in which he once again became involved in 1891; the Young Ireland Society; the National Monuments Committee; the 1798 Centenary Committee; the Wolfe Tone and ’98 Memorial Association; and the Ulstermen’s ’98 Club, Dublin. Of sharp intellect, highly literate and an eloquent communicator, he was an effective organiser, particularly with the Parnellite Irish National League.

In January 1882 he represented himself and ten others accused of riotous behaviour in Omagh. Appearing in court that March, he ‘proceeded to cross examine the [police] witness, which he did in a masterly manner, with each question being pertinent’; then in summing up, ‘he addressed the jury on his own behalf and that of his fellow prisoners, reviewing the evidence in a manner which a practised lawyer might not be ashamed of’ (Tyrone Constitution, 24 Mar. 1882). Five of the accused, including McGinn, were acquitted.

In 1894 he organised a demonstration in Omagh for Jeremiah O’Donovan Rossa (qv), as part of Rossa’s Irish lecture tour. When there was a split in the IRB in 1895, McGinn took the side of the IRB under Fred Allan (qv), as opposed to the Irish National Brotherhood under Mark Ryan (qv) and Robert Johnston (qv) of Belfast. McGinn persuaded many of the Belfast IRB to support Allan. (In 1907, however, Johnston entrusted McGinn with safely routing his letter to the United States to the Clan na Gael leader, John Devoy (qv), seeking support for an IRB strategy vis-à-vis the Ancient Order of Hibernians.)

In 1897 McGinn was elected as deputy leader of the Ulster executive of the 1798 Centenary Memorial Committee, serving on the executive council and helping to set up numerous centenary clubs across Ulster. Catholic clergy, however, set up their own centenary organisations, which acted in direct opposition to the memorial committee. Republican activists were regularly denounced from the altar. In Omagh, a local priest, warning parishioners about the IRB, all but named McGinn as the ‘dangerous individual going from town to town promoting that organisation’ (McGee, 2005, 252–3). As a result, McGinn’s employer, Dan Hackett, dismissed him. McGinn sold his farm and moved to Dublin.

In Dublin, McGinn became chairman of the Ulstermen’s ’98 Club, which he helped form. He continued to be involved with it and the Wolfe Tone and ’98 Memorial Association after the disbandment of those ’98 centenary clubs not controlled by republicans. He worked as a canvasser and promoter of the Parnellite Irish Daily Independent. The 1901 census shows McGinn and the family living in Dublin’s north inner city at Paradise Place, Inns Quay, listing his occupation as timekeeper. Later that year, McGinn secured the position of caretaker at Clontarf Town Hall with the help of Fred Allan, who had by then joined Dublin Corporation, and Clontarf councillor John Clancy (1844–1915). Meeting rooms formed part of the premises, and the town hall became a de facto centre of nationalist activity, with McGinn making these rooms available for any number of IRB Supreme Council meetings.

John Daly (qv) and McGinn are credited with introducing Thomas Clarke (qv) to the IRB in 1878. McGinn and Clarke were close politically and socially and Clarke and his wife, Kathleen Clarke (qv), stood as godparents for McGinn’s son Rommy. (In later years Clarke’s sister, Hannah, was a regular visitor to the McGinn home in Sutton, Co. Dublin.) In August 1900, when Clarke baulked at returning from America unless he was assured of a job being arranged for him in Dublin Corporation, it was McGinn who cabled him, telling him that his presence was necessary in Dublin. McGinn frequented Clarke’s shop, purchased in 1909, at 75A Parnell Street (then Great Britain Street), from which Clarke directed much of his republican activity; Dublin Metropolitan Police intelligence reports had McGinn routinely associating with Clarke and other key nationalists there.

A succession of internal upheavals within the IRB resulted in Clarke and Seán Mac Diarmada (qv) assuming control of the much slimmed-down movement and channelling their energies through the Irish Volunteer movement. McGinn was firmly aligned with the new leadership and Clontarf Town Hall continued to be used for Supreme Council meetings. In 1915 McGinn served on the O’Donovan Rossa Funeral Committee, which was chaired by Clarke. McGinn features in photographs taken at the graveside during Patrick Pearse’s (qv) oration and during the funeral procession through Dublin. The meeting that gave the go-ahead for the Easter 1916 rising seems to have been held in Clontarf Town Hall in January 1916. While Dr Pat McCartan (qv), a Supreme Council member, was vague as to whether a specific date was agreed or not, the timing fits with John Devoy’s record of events, something McCartan has acknowledged.

By then, however, McGinn was seriously ill and unable to take part in the Easter rising. His son, Con, was involved in heavy fighting in the Imperial Hotel, opposite the General Post Office in O’Connell Street (then Sackville Street) and was arrested on 27 April 1916 and held at Wakefield Prison, England, and at Frongoch internment camp, Wales. McGinn’s illness did not prevent his subsequent arrest. He was freed soon after but died on 28 July 1916, just days after Con had been released from Frongoch. Following a eulogy delivered by William O’Leary-Curtis (journalist and Fenian), he was buried in Glasnevin cemetery, Co. Dublin.

Police reports noted that McGinn was considered intelligent and well educated. One described him as ‘an old Fenian, very advanced in his opinion, would encourage outrage but is too clever to commit himself’ (National Archives of Ireland, Britain in Ireland microfilm collection, CO 904/18/719). Although Patrick Love, a nephew of McGinn’s wife, was adamant in his unpublished memoirs that McGinn had served time in prison, there is no evidence of this in his police files.

Following McGinn’s death, his widow, Catherine, was employed as housekeeper at Clontarf Town Hall and the family lived there until it was sold in 1925. Reports state that she frequently provided accommodation for republican fighters during the war of independence; she died on 7 March 1951. McGinn’s sons, Con and Rommy, followed similar paths. Both were members of the IRA and fought in the war of independence. Both were court-martialled for unlawful possession of firearms. Con was acquitted in 1920, while Rommy was sentenced to ten years penal servitude in 1921. Both joined the National Army and fought in the civil war. Sheila, McGinn’s only daughter, was also active during the war of independence, running dispatches.