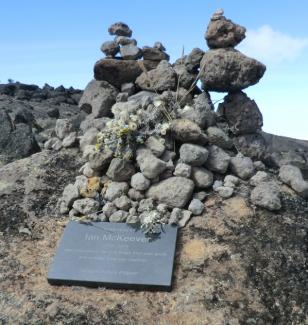 McKeever, Ian (1970–2013), mountaineer and charity fundraiser, was born on 13 February 1970 in Dublin. He was adopted from St Patrick’s Guild, an adoption agency run by the Sisters of Charity in Blackrock, Co. Dublin, by Niall McKeever, an accountant, and his wife Aedeen (née Molone). When Ian was three years old his parents adopted a second child, their daughter Denise. During the 1970s the family lived in Cabinteely, Co. Dublin, where Ian attended Johnstown National School. He recalled visits from the nuns during the early years of his life to check that all was in order in the family home. In 1982 the family moved to Watson Road, Johnstown, Killiney, and Ian received his secondary education at Cloneen College, Deansgrange.

Headstrong and chaffing for independence from an early age, McKeever moved out of home and into a flat in Dún Laoghaire when he was seventeen and worked part-time at the Horse and Hound pub to pay his rent. The following summer (1990) he moved to London and took a job at a recruitment agency, before coming back to Ireland to study social science in UCD. He planned to move to Australia when he turned twenty but a new relationship with a veterinary nurse persuaded him to stay in Ireland, and he began a two-year certificate in public relations at the Public Relations Institute of Ireland. This marked a frenetic period in his life where he combined his studies at night with a job presenting traffic news on the radio and selling advertising space for Avelbury Publishers. In 1996 a bleeding stomach ulcer forced him to re-evaluate his lifestyle and he left his job at Avelbury, but the restlessness and drive that defined his career meant that any lull was almost instantly filled with activity. From 1996 to 2000 he maintained two different careers, the first as one of the recognisable voices at AA Roadwatch delivering traffic news on Today FM radio, and the second as one-half of the public relations firm Goodbody McKeever.

His first brush with charity work came through his public relations contacts. Tony Leach, operations director of the Break for the Border group of pubs in Dublin in the 1990s, complained to McKeever and his business partner Paul Hayes about the charity buckets placed in his establishments on behalf of RTÉ’s ‘People in Need’ campaign. McKeever’s solution was the ‘Insane Café En Seine Dáil Duck Race’ where 175 blue rubber ducks were raced on the River Liffey, overseen by Labour TD Kathleen Lynch and several of her colleagues. Developing a taste for unusual ways of raising money, McKeever was next involved in the fledgling charity set up by the singer Ronan Keating and his sister Linda in memory of their mother Marie. Together they organised the book Anything but balls (1998) featuring stories from footballers across the world which raised significant amounts of money for the Keating Foundation. His most unusual and enduring contribution to novelty charity fundraisers, however, was ‘Operation Rudolph’, inaugurated on 20 December 1995 when McKeever cycled from Our Lady’s Hospital, Crumlin, to Waterford dressed as Santa Clause.

From 2002 McKeever’s charity work took precedence over public relations. In that year he and three others attempted the ‘Five Peaks’ challenge (climbing the highest mountain in Ireland, Northern Ireland, England, Scotland and Wales in forty-eight hours). By his own admission, he was ‘utterly clueless … I didn’t even know the names of the five mountains in question’ (McKeever, Give me shelter, 54). The other members of the team climbed the peaks in a record time of forty-two hours, but McKeever failed to make it up Scafell Pike, the highest peak in England, thus denying him a part in the record. His second attempt the following year also ended in failure, this time shown on RTÉ in a show entitled Five high. Watching himself fail on television was, he says, a catalyst and ‘that night I made I made a decision, a promise to myself if you will. I was going to break that world record’ (Shelter, 61). His third attempt, however, also ended ignominiously, when a member of the party had to be rescued from the side of Carrauntoohill, Co. Kerry. On 25 June 2004 McKeever and his team finally triumphed, beating the Five Peaks record by thirty-two minutes. The success drove him to seek ever more difficult challenges, and he set himself the task of achieving three world record challenges on mountains, at sea and on land. In 2007 he broke the ‘Seven Summits’ world record, climbing the highest peaks on seven continents in 155 days – thirty-two days less than the previous record, an achievement that gained international recognition. In 2009 he was part of a team that sought to row across the South Atlantic Ocean in under thirty days, but a lost rudder meant the attempt had to be abandoned after eleven days and 1003 miles. The following year he trained to beat the athlete’s Eamonn Coughlan’s four-minute mile record for a person over the age of forty, and over a twenty-two-month period his time dropped from seven minutes to four minutes, twenty seconds. He detailed his experiences in the books Give me shelter (2007) and Give me Irish heroes (2009).

Of all the peaks McKeever climbed, Kilimanjaro in Tanzania was his favourite: ‘if you only do one climb in your entire life, make it Kilimanjaro … [it] will change the way you see things’ (Shelter, 132). In 2008 he helped his ten-year-old godson Sean McSharry become the youngest person in Europe to reach the summit; while in 2011, he spent the entire summer in Tanzania guiding more than 300 Irish teenagers to the summit through Kilimanjaro Achievers Team (an organisation he helped found) setting a Guinness World Record for the largest group of people to reach the top. In August 2011 McKeever and his friend Samwel Kisonga also attempted to break the world record for the fastest ascent of Kilimanjaro to raise funds for their 'Black and White Makes Sense' campaign. The attempt failed, however, because they were unable to get the required permits in time from the Tanzanian officials. In December 2012 McKeever began a new attempt on Kilimanjaro, leading a team that included his fiancée Anna. The team began their ascent on 30 December and celebrated New Year's Eve on the side of the mountain. However, the weather turned unseasonably poor and in his final post on Facebook McKeever noted: ‘Torrential rain all day. Spirits remain good even if drying clothes is proving impossible. We pray for dryer weather tomorrow – the big day.’ As the group neared the site of their overnight camp about 12.30pm on 2 January 2013 there was a lightning strike and, while some of the party received minor injuries and burns, McKeever was badly injured and died on the way back down the mountain. His body was brought back to Ireland and his funeral mass took place on Saturday 12 January in the church of Saint Laurence O'Toole, Roundwood, Co. Wicklow, followed by a private cremation service. His friend Gordon Mac an Bhaird, speaking at the funeral, summed up his attitude: ‘One day your life will flash before you and you should make sure it is worth watching’ (Irish Times, 12 Jan. 2013). McKeever’s achievements and commitment to charity were lauded by, among others, the climber Pat Falvey and Adi Roche, chief executive of Chernobyl Ireland. Ian McKeever was due to marry his fiancée Anna O’Loughlin in September 2013; a previous marriage had ended in 1998.