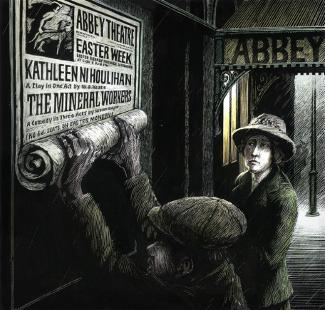 Molony, Helena (1883–1967), actress, republican, trade unionist, and feminist, was born 15 January 1883 at 8 Coles Lane, off Henry St., Dublin, the younger of one daughter and one son of Michael Moloney, grocer, of that address, and Catherine Moloney (née McGrath). Orphaned at an early age, she had an unhappy relationship with her stepmother, whom her father had married shortly before his death. Helena probably received a catholic secondary-school education. Throughout adult life she styled her surname ‘Molony’, though some sources erroneously employ the spelling ‘Moloney ’. Self-described in reminiscence as ‘a young girl dreaming about Ireland’ (Fox (1935), 120), she was deeply moved on hearing (August 1903) a speech by Maud Gonne (qv) and soon joined Gonne's women's organisation Inghinidhe na hÉireann. Adopting the pseudonym ‘Emer’ for Inghinidhe work (by which name she was called within Gonne's circle of republican women the rest of her life), in 1907 she became the organisation's secretary. Opposed to the socially conservative and dual-monarchist policies advocated by Sinn Féin's Arthur Griffith (qv) in the United Irishman, she assisted Gonne in launching Ireland's first women's periodical, the monthly Bean na hÉireann, to advocate ‘militancy, separatism and feminism’ (Fox (1935), 121). Molony edited the journal (1908–11), and wrote its ‘Labour notes’ (from 1910), thus initiating her involvement with the trade union movement. She was introduced (1908) by Bulmer Hobson (qv) to Constance Markievicz (qv), whom she brought into the nationalist and feminist movements, and whom she assisted in the founding (1909) and early operation of the republican scouts’ organisation, Na Fianna Éireann. During Dublin protests against the impending visit of King George V (July 1911), she was arrested for throwing a stone at portraits of the monarch and his consort outside a Grafton St. shop. Jailed after refusing to pay the fine, she was the first Irishwoman of her generation imprisoned for a political offence, but served only several days of a one-month sentence before the fine was paid for her by Anna Parnell (qv). Trained in the Inghinidhe acting class by Dudley Digges (qv), she began acting professionally in 1911. Acclaimed for her performance in ‘Eleanor's enterprise’ by George Birmingham (qv) – produced by the Independent Dramatic Company run by Count and Countess Markievicz (December 1911) – she was invited to join the Abbey Theatre, where, amid interruptions occasioned by political activity and time abroad, she appeared regularly until the 1916 rising, and intermittently for several years thereafter, playing in first productions by Lady Gregory (qv), Lennox Robinson (qv), Brinsley McNamara (qv), and others. During the 1913 Dublin lock-out, Molony employed her theatrical experience to make up the disguise of James Larkin (qv) as an aged clergyman, in which guise he entered the Imperial hotel and from a balcony briefly addressed a crowd in Sackville St., resulting in the ‘bloody Sunday’ police baton charge (31 August). Playing over ensuing months in ‘The mineral workers’ at the Abbey, between her scenes Molony addressed strike meetings at Liberty Hall.

When the Irish Women Workers' Union (IWWU) was reorganised as an affiliated branch of the Irish Transport and General Workers' Union (August 1915), Molony, on the recommendation of James Connolly (qv), was elected general secretary. Manager of the Liberty Hall workers' clothing cooperative (which manufactured cartridge belts prior to the Easter rising), she was secretary of the Irish Citizen Army (ICA) women's group, and performed in the ICA acting troupe. On Easter Monday 1916 she was attached to the ICA contingent, commanded by fellow Abbey actor Sean Connolly (qv), that operated in the Dublin Castle area. She supervised the nine women of the City Hall garrison in establishing a first-aid station and commissariat, and witnessed Connolly being shot dead by a sniper. Arrested on the garrison's surrender that night, Molony was one of five women interned in England until her release from Aylesbury gaol (December 1916). Returning forthwith both to politics and the Abbey stage, she appeared in the first Irish production of Chekhov's ‘Uncle Vanya’ (February 1917); serving briefly on the Sinn Féin executive, she attended the October 1917 ard-fheis that reconstituted the organisation as a republican party.

Although resuming her post as IWWU general secretary in 1917, she was replaced in a 1918 reorganisation by Louie Bennett (qv), under whom she served for a time as deputy. She remained an IWWU official for over twenty years, her republicanism and social radicalism often in conflict with the union's moderates, led by Bennett and Helen Chenevix (qv). Active in the ICA until 1923, during both the war of independence and civil war (in which she was anti-treaty) she served in various capacities, including training, propaganda, and courier of arms and messages. She strenuously supported the contemporary workers' soviets and factory seizures. Pressured by Bennett to concentrate on trade-union duties, she abandoned the stage in a last, memorable performance in Lennox Robinson's ‘Crabbed youth and old age’ (November 1922). At intervals in the 1920s and 1930s she urged reorganisation of the trade unions along industrial lines, partly to resolve rancorous jurisdictional disputes between Irish-based and cross-channel unions, partly out of abiding syndicalist conviction. When the Irish Labour Party and Irish Trade Union Congress (ITUC) split into separate organisations (1930), she led a losing fight to keep both bodies committed to the socialist objective of workers' control of industry. Her abiding concern was the organisation of domestic workers, for which she led periodic, albeit largely fruitless campaigns. Her 1930 visit to the USSR accentuated ideological tensions within the IWWU. She was active, often alongside Maud Gonne, in the Women's Prisoners' Defence League, the People's Rights Association, and the Anti-Partition League. On the founding executive of Saor Éire (September 1931), under pressure from Bennett she resigned within one month. As IWWU organising secretary (1929–41), she was prominent in effecting the union's growth to over 5,000 members, representing one-quarter of the country's women trade unionists. Serving several one-year terms on the ITUC executive (1921–2, 1933–8), as congress vice-president (1935–6) she unsuccessfully opposed those provisions of the conditions of employment act that allowed the displacement of women workers by men. Vice-chair of the 1936 trade union commission of inquiry, she defended the IWWU's status as an all-female body on the grounds that women constituted a separate economic class. She was the second woman (after Bennett) to be elected ITUC president (1937–8), but ill health prevented her delivering her annual presidential address. Under pressure over alleged wartime IRA associations, she retired on health grounds in October 1941.

A fervent speaker and ‘doughty fighter for the working class’ (Jones, 165), Molony retained a passionate commitment to her early revolutionary ideals into a time when both the nationalist and trade union movements eased into moderation and institutionalised respectability. After living through her twenties on a small family bequest, for many years she led a precarious and unsettled existence, often reliant on friends for accommodation. Bouts of depression, heavy drinking, and physical illness often occasioned absence from work, and contributed to her induced retirement. She never married. From the 1930s she had a close relationship with psychiatric doctor Evelyn O'Brien, with whom she lived on the North Circular Rd and, after 1966, on Strand Rd, Sutton. She died in their Sutton home on 28 January 1967, and was buried in the republican plot, Glasnevin cemetery.