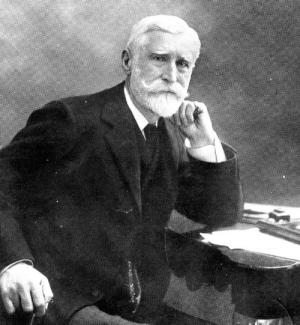 Murphy, William Martin (1845–1919), businessman, was born on 6 January 1845 at Derrymihan, near Castletownbere, Co. Cork, son of Denis William Murphy, building contractor, and his wife, Mary Anne (née Martin). His solitary and austere personality was influenced by his status as an only child and his mother's death when he was four. He was educated at Bantry national school and Belvedere College in Dublin. He worked in the offices of the Irish Builder and the Nation, whose proprietor, A. M. Sullivan (qv), was a Bantry man and family friend. This drew Murphy into the ‘Bantry band’, the group formed round the family connection between Sullivan and T. M. Healy (qv), which dominated the conservative wing of late-Victorian Irish nationalism.

In 1863 Murphy inherited the family business on the death of his father. In 1867 he moved to Cork, where in 1870 he married Mary Julia Lombard, daughter of a prominent Cork businessman, James Fitzgerald Lombard (qv). They had five sons and three daughters, whose marriages (notably with the Chance family) strengthened Murphy's political and business alliances. His success was based on building light railways in the south and west of Ireland; he also became involved in running these railways, sat on several boards, and facilitated the merger that created the Great Southern and Western Railway.

On the back of his success in business, Murphy moved to Dublin in 1875, buying Dartry Hall, Upper Rathmines, his principal residence for the rest of his life. He prided himself on not moving to London, as many successful Irish businessmen did at that time. His Dublin interests included Clery's department store, the Imperial Hotel, and the Dublin United Tram Company, created in 1880 by the amalgamation of three Dublin tramways and chaired by Murphy's father-in-law. Murphy constructed many Dublin tramlines, oversaw their electrification from 1896, and was chairman of the company from 1899 to 1919. He later constructed tramways in Cork, Belfast, Britain, and Buenos Aires.

Murphy was an intense catholic, fiercely resenting protestant and unionist privilege; he allegedly told a daughter, who wished to marry a protestant, that he would sooner see her a streetwalker. The disdainful manner adopted by Charles Stewart Parnell (qv) fuelled this resentment. During the Parnell ‘split’ in 1890 Murphy financed the National Press, established to counteract the Parnellite Freeman's Journal. Dominated by T. M. Healy and his clerical allies, the National Press became notorious for vitriolic attacks on Parnell and was widely blamed for his death. The rival anti-Parnellite faction, led by John Dillon (qv) and William O'Brien (qv), allied with the Freeman and orchestrated a merger with the National Press, after which the Healyite directors (including Murphy) were removed. The Healyites then established the Daily Nation, which was underwritten by Murphy.

Murphy was MP for St Patrick's division, Dublin, in 1885–92, but lost his seat to William Field (qv), the Parnellite candidate, in the July 1892 general election. His subsequent attempts to return to parliament ended in failure (in Kerry south in a by-election in 1895 and Mayo north in the 1900 general election). O'Brien described Healyism as ‘the firm of Healy and Murphy, moral assassins . . . Murphy bought the knives and Healy did the stabbing’. The Irish Party used parliamentary muscle to block Murphy's commercial schemes for Dublin electrification in favour of a municipal enterprise, advocated railway nationalisation, and accused him of using Healy's political influence to win railway contracts in the Gold Coast. Murphy responded by accusing them of political vindictiveness, adding that the notorious incompetence and corruption of Dublin corporation said little for its members’ business acumen.

In 1900 Murphy purchased the moribund Parnellite Irish Daily Independent and merged it with the equally precarious Daily Nation. In 1904 he bought out the other shareholders and relaunched the Irish Independent as a halfpenny paper modelled on the ‘new journalism’ pioneered by Lord Northcliffe. His decisiveness, calm willingness to risk vast sums, and eager interest in new journalistic techniques, coupled with the professionalism of a new editor, T. R. Harrington (qv), brought the paper into profit by 1910. The principal casualty of the Irish Independent's growth was the Freeman's Journal, shackled by unadventurous management and subservience to the Irish Party leadership. While the sombre Murphy and the ebullient Healy remained personal friends, Murphy distanced the Irish Independent from Healyism, though the paper's guarded criticisms of the Irish Party assisted Healy (and Sinn Féin).

Murphy's far-flung business enterprises encouraged his belief that a self-governing Ireland's interests lay with the British empire; for many lower-middle-class Irish Irelanders and economic nationalists he symbolised ‘West British cosmopolitanism’, and D. P. Moran (qv) criticised his business associations with protestants. In 1904 Murphy proposed a Dublin International Exhibition, like that organised by William Dargan (qv) in 1852, with Edward VII as patron. Irish Irelanders protested that it would assist foreign manufacturers to sell their goods to Irish customers and organised a boycott. The exhibition took place in 1907; it was opened by the king, who wished to knight Murphy, an offer he refused, saying that he could not accept honours while home rule was denied. The exhibition made a financial loss but its prestige reinforced Murphy's image as a second Dargan and led to his election as vice-president (1911–12) and president (1912–13) of the predominantly unionist Dublin chamber of commerce.

From 1911 Murphy led the Dublin employers’ resistance to the ITGWU led by James Larkin (qv). Murphy adhered to a deferential model of employer–labour relations, which enforced strict codes of conduct on employees and tolerated craft unions only if they accepted that employers and workers shared a common interest in the development of Irish industries; this bred in many employees the same resentment that Murphy felt towards the older Anglo-Irish establishment. Larkin tried to organise poverty-stricken unskilled labourers into one big union, which could seize control of the economy and abolish capitalism; Murphy argued that Dublin needed more capitalists, that Larkin was an irresponsible demagogue waging war on church and state to gratify his vanity, and that the ITGWU was no more a legitimate trade union than ‘a pirate ship’.

The battle came to a head in August 1913 when Murphy locked out members of the ITGWU employed by the Irish Independent and Larkin called a tram strike. The ITGWU blackballed businesses that dealt with Murphy's firms, while Murphy organised a concerted effort by employers to follow his example and lock out ITGWU members; his journalists dismissed compromise proposals as the work of ‘cheapjack pacificators’. In the short term the employers won, and the chamber of commerce celebrated by presenting Murphy with his portrait painted by William Orpen (qv), which was subsequently hung in the Irish Independent boardroom; but the strikers’ sufferings cemented the image of Murphy as a cold, philistine tyrant, which was reinforced by the invective of W. B. Yeats (qv) and George Russell (qv).

During the third home rule bill debates the Irish Independent criticised the Irish Party over the financial provisions of the bill, alleged subservience to the Liberals, and passivity in the face of Ulster unionist resistance to home rule. Murphy, who admired Erskine Childers's (qv) arguments for dominion status, believed that anything less than full fiscal autonomy would continue a rancorous, irresponsible dependence on Westminster.

He regarded even the suggestion of partition as an unbearable humiliation. He strongly supported Irish participation in the first world war, but continued to criticise the Irish Party's handling of events. After the Easter rising he emerged as the leading opponent of any compromise on partition, though this stance was overshadowed by an editorial in the Independent (written by Harrington but which made Murphy a hate-figure for republicans for the rest of his life) supporting the execution of James Connolly (qv). The Irish Independent subsequently suggested that Sinn Féin could not be more incompetent than the Redmondites and supported the dominion home rule settlement, which Murphy also privately urged on the British government. In 1917–18 Murphy was a member of the Irish Convention, where he advocated dominion status and opposed any compromise on fiscal autonomy.

Murphy died 26 June 1919 at Dartry from a heart attack caused by aortic valve disease. His descendants remained prominent in Irish business life until the 1970s. It is hard to like Murphy, but difficult not to respect him. He was a scornful professional surrounded by complacent bunglers and windbags.