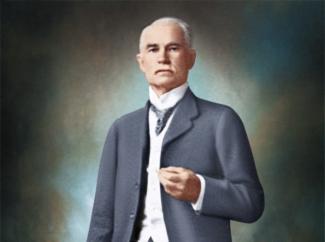 Murray, James Andrew (1840–1921), businessman, was born in 1840 in Co. Clare, the eldest of five sons and one daughter of Michael Murray and his wife Ann (née MacNamara), of whom little is known. The family emigrated to Canada about 1845, and in 1858 at age eighteen, James left for the gold fields of California. Finding no success in California, he headed north to the western portion of the Montana Territory in 1860. It was there he had his first success with a small gold strike, which provided a springboard for investment in a diverse range of business interests.

Over several years he opened or purchased general stores, saloons, banks and water companies to serve the wave of prospectors who flooded the Montana Territory in the late nineteenth century. His predatory business practices were legendary within the Territory, and he was commonly referred to as either a horse thief, card shark or claim jumper. His unsentimental penchant for quickly foreclosing on borrowers extended to friends and family members. In 1871 he married Sarah Burchett of Ohio. They changed residences often in the early years of their marriage, moving from one mining camp to the next. In 1878 they settled in Butte, Montana, a town that would become the largest mining camp in the world at the turn of the nineteenth century. The couple divorced in 1884 and had no children together.

As railroads were built in the American West, Murray travelled often and expanded his business empire along the pacific coast – from Seattle, Washington, to San Diego, California. In addition to mining operations, he ruthlessly pursued interests in real estate development, hot springs resorts and water utilities, and invested in newspapers to advocate for his enterprises. In San Diego, he built a series of dams that provided a share of the water supply that eventually allowed a town with a population of 40,000 to transform into a burgeoning urban centre with over one million residents. He did not alter his predatory business practices as he expanded the reach of his business empire. As one of his acquaintances remarked, ‘Jim Murray, I knew you when you was a petty larceny thief, and now I know you when you are a grand larceny thief’ (Noyes, 91).

Murray married a second time to twice-divorced Mary Coulture of Pennsylvania in 1896, while at the height of his success. The couple shared a modest apartment in Butte for several years before acquiring, in 1905, a mansion fit for a mining tycoon in Monterey, California. Located 150 km south of San Francisco, next to the Cannery Row made famous by John Steinbeck’s novel, the mansion included 1,000 feet of coastline. After the purchase, the couple – who never had children – split their time between Butte, Monterey and Hunter’s Hot Springs Resort next to Yellowstone National Park, which was owned by Murray.

Murray’s philanthropy, always made in anonymity, focused on hospitals serving injured miners and orphanages for the children they often left behind. He was also a patron of the arts, underwriting a circuit of theatres in Montana started and operated by John Maguire, a close friend and fellow Irish emigrant. Murray also supported Monterey’s art colony after a massive earthquake damaged San Francisco in 1906. He commissioned several monuments: a granite obelisk in an abandoned mining town in Montana memorialising his fellow miners that died there, a theatre stage etched in a granite block to mark John Maguire’s grave, and, rather curiously, a granite obelisk etched with a Celtic cross to mark the site of Father Junípero Serra’s first catholic mass in North America, celebrated in 1770.

Murray was considered an eccentric personality during his time. A newspaper editorial published after his death remarked that it was his ‘accentuated individuality that made him immediately interesting to strangers’ and noted wealth never spoiled him, writing that ‘he preferred the companionship of men who had been comrades and friends in the days of his beginnings to that of the many that liked to see his name on their board of directors’ (Anaconda Standard, 12 May 1921). Besides his preferences in relation to the company he kept, Murray distinguished himself from other men of great wealth in America in several ways. He participated actively in populist political movements, zealously supported Irish nationalism and embraced employee unions.

His formal engagement with politics started in 1884 with his election to the Central Committee of the pro-union, anti-monopoly People’s Party in Butte. After the collapse of the People’s Party, he joined the Democratic party and actively supported the presidential campaigns of populist William Jennings Bryan in 1896 and 1900. From the early 1900s until his death, his close circle of friends and business partners in Butte included members of the Socialist and Communist parties.

Known in the American West to have more ready cash available than anyone except W. A. Clark, he either self-financed his ventures or relied on passive investors, eschewing the assistance of large organisations, banks or shareholders. Never permitting shareholders or outsiders to have a say in his business decisions, he hired only a few employees, and with no children of his own, used nephews, nieces, in-laws and stepsons to manage his businesses or as shills to hold titles to properties (to evade taxes or legal obligations). When his brother Andrew died in 1887 in Canada, he brought his sister-in-law Mary (née Cooney) Murray and her three children (Marcus, James E., and Mary) to Butte, put the children through college, and placed them in demanding roles as employees in his business empire.

His fervour for Irish independence was remarkable among his peers. Supporting every call for funds that originated in Ireland, from the 1880s until his death in 1921, he joined three local Butte chapters of Irish nationalist organisations: the National League, the Ancient Order of Hibernians and the militant and secretive Clan na Gael (to which Murray accepted nomination in 1883). During the seven years he was a member of the Butte branch, Clan na Gael sponsored several dynamite attacks in Britain.

Outside of secret Clan meetings, Murray did not hide his loyalty to his mother county and his disdain for power brokers in the catholic church who, he believed, conspired to perpetuate British rule. After Pope Leo XIII directed the Irish clergy in 1883 to suppress support for Charles Stewart Parnell (qv), Murray and theatre partner Maguire organised a meeting to dictate a public response. Murray headed the committee that drafted the resolution supporting Parnell. His words implicitly supported both the land reform and home rule movements, praising the work of Parnell in ‘all of his efforts to alleviate the sufferings of Ireland and the Irish people’ and denounced the Pope’s support of English tactics which ‘starves, coerces, and exterminates the people of Ireland’ (Butte Daily Miner, 17 June 1883). The group unanimously adopted the resolution, formed a chapter of the Irish National League, and selected Maguire and Murray to serve as two of seven trustees of the organisation. Three years later, in the autumn of 1886, Murray joined several Butte Land Leaguers as official hosts for Michael Davitt’s (qv) visit to the town. Davitt spoke to an enthusiastic gathering at Murray and Maguire’s Grand Opera House about the fight for home rule.

Two decades later, Murray took a more active role in promoting Irish independence by working to disrupt the production of munitions needed for England’s allies during the first world war, and by supporting Éamon de Valera’s (qv) fundraising and political efforts in the United States. His attempts to disrupt the production of munitions came through financing the expansion of the Butte Bulletin newspaper in August 1918. With Murray’s backing, the anti-war, pro-labour and pro-Irish paper became the largest daily newspaper in the state of Montana, with circulation extending throughout the American West. At this time US army troops were stationed in Butte to enforce war-time prohibitions against work stoppages. The paper effectively served as an organ for union officials organising efforts to conduct illegal strikes throughout mining camps in the western United States and was deemed a serious threat to national security. The offices of the paper, raided on one occasion by the US military, were under constant surveillance by US intelligence agencies until Germany was defeated at the end of 1918.

After the war, while the Butte Bulletin continued to serve as a voice for labour unions and Irish nationalists, Murray provided financial support to his nephew, James E. Murray, to actively participate in de Valera’s American Association for the Recognition of the Irish Republic (AARIR), established in 1919. James E., a prominent attorney, started out as director of the Montana chapter at de Valera’s request and within two years was vice president of the organisation and chairing the national convention in Washington DC. Soon after, James E. was promoted to president of the 60,000-member organisation. The Butte Bulletin provided extensive pre-publicity and coverage for all AARIR activities, and James Murray was present for many of the early events in Butte. During James E.’s time with AARIR the organisation raised $5.8 million in aid for Ireland.

James Andrew Murray passed away on 11 May 1921. Survived by his wife, Mary, his funeral was held at the historic Monterey Mission, founded by Fr Junípero Serra. While he held a burial plot near John Maguire’s grave in Monterey, his wife chose to bury him over 100 km away in Colma, California. At the end of his life, Murray’s fortune was estimated at $15 million, making him one of the wealthiest individuals in the American West. There was a nine-year battle for his estate involving twenty-six relatives. His nephew James E. received about half of the estate after all lawsuits were settled, calling it compensation for a lifetime of service to his uncle. Murray left no papers of his own, but two of his partners (Frank ‘Sandbar’ Brown and Ed Fletcher) left their papers, including extensive and often colourful communications from Murray to the University of California, San Diego, and the University of Montana.