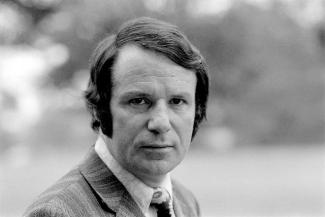 Nealon, Ted (1929–2014), journalist, broadcaster and politician, was born on 24 November 1929 in Coolrecuill, Aclare, Co. Sligo, the younger of two sons of Ted and Una Nealon. Una died when Ted was two and the boys were raised by their father. Ted completed his education at St Nathy’s College, Ballaghaderreen, Co. Mayo (1942–6) and featured on the 1947 Sligo minor Gaelic football team. He then lived in Lancashire for a time, working in a candle factory, as a railway porter and at various other jobs, and played rugby league with the Cadishead Rhinos. Upon his return to Ireland, he won Sligo senior football championships with Tubbercurry (1950 and 1951) and played inter-county football for Sligo (1952–9). A right full-back, he featured on the team that lost the 1954 Connacht football final to Galway. In 1956 he won another Sligo senior football championship with Tourlestrane.

In the early 1950s Nealon worked as a journalist with the Drogheda Argus, living in Dundalk and playing Gaelic football there with Gaels GFC. In November 1954 he joined the Irish Press. Amongst other roles he was the paper’s London correspondent and covered the 1957 Fethard-on-Sea boycott, which arose when Sheila Cloney (qv), a protestant who had married a catholic, refused to raise their children as catholics. As Taoiseach Éamon de Valera (qv) wished to minimise the controversy, much of Nealon’s reporting for the Irish Press was spiked, although he did share some of it with Cathal O’Shannon (qv) of the Irish Times. Nealon went on to become news editor of the Sunday Review, Ireland’s first Sunday tabloid newspaper which was published (1957–63) by the Irish Times Ltd. He collaborated on the ‘Inside politics by “Backbencher”’ column with the editor, John Healy (qv), for which the Sunday Review, despite a weekly circulation of 190,000, is best remembered. The two had attended St Nathy’s together and remained close friends. (When in 1957 the US State Department had selected Healy for a US exchange programme Nealon lent him the cost of the air fare, which their then employer, the Irish Press, would not cover.)

Healy, who later took the ‘Backbencher’ with him to the Irish Times, is usually credited with the column’s initial success. However, according to their Sunday Review colleague James Downey, Nealon ‘deserves equal credit. It is not too much to say that between them they transformed political coverage … [the column] featured pithy comments, shenanigans in constituencies and loads of stories’ (Downey, 81). The Sunday Review column broke new ground in Irish political journalism by relying heavily on inside information, principally leaks from ambitious young politicians such as Donogh O’Malley (qv), Brian Lenihan (qv) and Charles Haughey (qv).

When Healy became editor of the Evening Mail, Nealon edited the Sunday Review for a time during 1961. When the Evening Mail was shut down in 1962, Healy returned as editor and Nealon was demoted to managing editor. Upon the demise of the Sunday Review in December 1963, Nealon, unhappy at his treatment by Irish Times editor Douglas Gageby (qv), turned down an offer to become the latter paper’s political correspondent. Instead he joined Telefís Éireann and presented Location and then Our parish, an experimental documentary series examining life in Shinrone, Co. Offaly, broadcast during 1964.

From that autumn Nealon was a presenter with On the land, produced by Muiris Mac Conghail (1941–2019). He also scripted and presented Garda patrol, produced in conjunction with the Garda Crime Prevention Unit, and appeared on Telefís Feirme, a forty-eight-part agricultural education series, as well as fronting Cross country, a ten-minute farming news slot which he also edited. Nealon followed Mac Conghail to Division, a current affairs programme launched in autumn 1966. After Division was amalgamated with the re-named 7 days, in April 1968 he presented an investigation of mental health services in Ireland and a notable 7 days special profiling Oliver J. Flanagan (qv) in June 1968. As a leading political analyst on RTÉ’s flagship current affairs programme, broadcast twice weekly, Nealon had a significant national profile and was widely praised for his political knowledge and journalistic acumen. On 14 October 1967 he married Josephine (‘Jo’) Loughnane at St Brendan’s church, Birr, Co. Offaly; they had two children together.

When, for the second time in a decade, Fianna Fáil sought to change the electoral system (replacing Ireland’s ‘proportional representation single transferable vote’ (PRSTV) with the majoritarian ‘first past the post’ (FPP)), 7 days broadcast a seminal programme on 22 December 1967. Nealon – presenting alongside David Thornley (qv) with Basil Chubb (qv) marshalling research – emphatically demonstrated how general election outcomes under a FPP system, using first preference vote share data from the recent local election, would massively entrench Fianna Fáil’s power (gaining almost sixty-five per cent of available dáil seats) and render the Labour Party close to irrelevant. The broadcast was widely regarded as having a significant impact on public understanding of the implications of abandoning PRSTV. In the ensuing constitutional referendum, held in October 1968, sixty per cent of voters rejected the government’s proposed amendment.

In mid-February 1968 Kevin McCourt (qv), the director general of RTÉ, announced the transfer of 7 days from current affairs to the news division. This appears to have been to curb Mac Conghail’s independent and aggressive (some said courageous) production philosophy. In resisting Nealon, Brian Cleeve (qv) and another NUJ member had their contracts terminated by the RTÉ Authority. Nealon, after a fudge that allowed the programme’s transfer and staff to remain somehow autonomous, re-joined 7 days in March, and was among those who covered the general election in June 1969, as television began to play an increasingly important role in political journalism. During coverage of the February 1973 general election, when the computer provided to RTÉ by the BBC (incorrectly programmed to process data on the basis the UK’s FPP, and not Ireland’s PRSTV, system) spurted out preposterous predictions, Nealon improvised and within half an hour prepared and delivered a masterful election forecast. The Irish Times noted that it ‘was Ted Nealon’s night’ and that he gave ‘an astonishingly able and professional performance’ (5 Mar. 1973), which won him a 1973 Jacobs award.

Nealon’s deep, granular and multifaceted knowledge of Irish political life surprised few who knew him well. In 1974, in conjunction with the Institute of Public Administration, he published the first edition of what was to become his greatest contribution to Irish journalism. Ireland: a parliamentary directory 1973–74 (1974) was launched in the dáil in December. An invaluable compendium of political statistics and information, it collected 282 biographies of those elected to the dáil, seanad and Northern Ireland assembly, alongside results of the 1973 presidential election, of Northern Irish constituencies in the 1974 UK general elections, and of by-elections held in Northern Ireland and the Republic. It was a non-fiction bestseller in 1975.

The return of Mac Conghail to RTÉ in September 1975 allowed Nealon to replace him as head of the Government Information Service (GIS) – effectively government press secretary – half-way through the Fine Gael–Labour coalition’s term. He resigned his civil service position to stand as a Fine Gael candidate in the 1977 general election in the Dublin Clontarf constituency, whose sitting TDs included George Colley (qv) and Conor Cruise O’Brien (qv). He polled a respectable 2,821 first preference votes (9.11 per cent) but failed to gain a seat. His reinstatement as head of the GIS before the end of the month generated considerable adverse comment, especially from Fianna Fáil, who would form the incoming government and inevitably replace him. Liam Cosgrave’s (1920–2017) ‘reactivation’ of Nealon’s contract (with a £11,000 salary at assistant secretary grade) ensured he received a generous termination settlement when Frank Dunlop replaced him in July. Nealon spent much of autumn producing, with Dunlop, Ted Nealon’s guide to the 21st dáil and seanad (1977). From 1981 the publication was titled Nealon’s guide; editions followed subsequent general elections (1982, 1983, 1987, 1989, 1993, 1997). After 1997 Nealon receded from the project, which from 2002 was published in conjunction with the Irish Times.

In August 1977 the new Fine Gael leader Garret FitzGerald (qv) appointed Nealon as party press and public relations officer, and marketing expert Peter Prendergast as general secretary. Nealon and Prendergast took significant steps to modernise the party, with the former overhauling the party’s communications, adopting professional campaign methods for the 1979 European Parliament election campaign. In 1980 he established a communications committee, which worked in conjunction with Prendergast’s strategy committee. Made up of experts in media management, advertising, marketing and public relations, Nealon’s committee focused on marketing the party, its leadership and its policy manifesto. These changes – in leadership, personnel and strategy – marked the modernisation of Fine Gael’s approach to political communication, and the party’s vote share increased from 30.6 per cent in 1977 to 39.2 per cent in 1982.

Nealon was elected a Fine Gael TD for Sligo-Leitrim in the 1981 general election, with 6,292 first preference votes (13.19 per cent). He retained the seat in the next five general elections, holding it for sixteen years, and served briefly as a minister for state in both the Department of Agriculture (1981–82) and the Department of Posts and Telegraphs (1982). After the third general election in eighteen months, he was appointed minister for state in the Department of the Taoiseach, with responsibility for arts and culture (1982–7). In February 1983 he was given responsibility for broadcasting and the following month Mac Conghail was reappointed RTÉ controller of programmes (television). After severe budgetary cuts affected the arts sector, Nealon was able to disburse significant capital grants from the ‘fund of suitors’ (enabled by 1984 primary legislation which collected funds in the control of the courts that were lying dormant). The Royal Hibernian Academy received £100,000 to complete their gallery extension, which had lain incomplete for over a decade. The Royal Irish Academy of Music, the Irish National Ballet and Comhaltas Ceoltóirí Éireann also received substantial grants under the scheme. In addition, section 32 of the Finance Act (1984) sought to generate additional funding by offering tax benefits to corporations or individuals sponsoring the arts. While additional funding for the arts was widely welcomed, critics argued that these measures failed to recognise or support emerging artists or cultural initiatives from outside established institutions. In January 1987 Nealon published the first ever white paper on cultural policy, Access and opportunity (1987), which urged a wider recognition of the importance of cultural policy, to be supported by funding from the National Lottery, which commenced that March. His efforts on behalf of the arts led the French government to make him a commandeur of the Ordre des Arts et des Lettres in 1985.

After Fine Gael’s loss of office in February 1987 Nealon was party spokesperson on science and technology (1987–9), becoming spokesperson for tourism, transport, arts and culture in 1989, and later for defence and arts and culture. One of the few journalists to achieve success in post-independence Irish politics, he retired from the dáil in 1997 and later published Tales from the dáil bar (2008), a collection of colourful anecdotes featuring many of the legendary characters of Irish politics. He died on 28 January 2014 at St John’s community hospital, Sligo, having lived in the town for most of his later life. After a funeral mass at the Cathedral of the Immaculate Conception there he was buried in St Patrick’s Cemetery, Scarden, Strandhill, Sligo. Ted Nealon Road in the town is named after him.