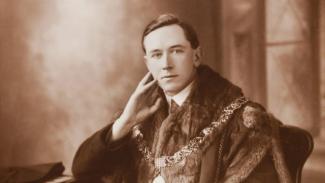 O’Callaghan, Donal (1891–1962), lord mayor of Cork, chairman of Cork County Council and TD, was born on 23 June 1891 in Peacock Lane, Cork, eldest among seven surviving children (five sons and two daughters, another son died in infancy) of William O’Callaghan, an insurance agent, and Catherine (Kate) O’Callaghan (née Donovan). Donal, or Donal Óg as he became known, was baptised in the North Cathedral on 25 June 1891. By the time his birth was registered four days later (29 June), the O’Callaghan family had moved to 1 Factory Lane, Cork. Young Donal went to primary school at Eason’s Hill, where he was taught by the renowned Eamonn O’Donnchadha (1876–1953) and earned a reputation as a noted Irish speaker. Like Tomás MacCurtain (qv) and Terence MacSwiney (qv), Donal O’Callaghan went to secondary school in the fabled North Monastery in Cork and his love affair with the Irish language continued.

Upon leaving school, Donal worked briefly with his father as an insurance agent before starting a career as a teacher. His main focus however was on republican politics and he associated with the likes of MacCurtain, MacSwiney, Liam de Róiste (qv) and Michael O’Cuill (1888–1955). He became immersed in every republican organisation and association in Cork city, including the IRB, the Ancient Order of Hibernians American Alliance, Fianna Éireann, the Irish Volunteers and Sinn Féin. The failure of the Volunteers in Cork to participate in the Easter rising of 1916 left him bitterly disappointed. When MacSwiney and MacCurtain were arrested and spent the second half of 1916 in the Frongoch internment camp, it was O’Callaghan who filled the leadership vacuum. He took over as chairman of the local Sinn Féin branch in Cork city and worked diligently to boost the profile of the party. Surprisingly, Donal O’Callaghan, then aged twenty-eight, did not contest the local municipal elections for Cork Corporation in January 1920. The elections in Cork city were a success for Sinn Féin and the Transport Workers who ran on a combined ticket. In total, they claimed thirty out of the fifty-six seats available and MacCurtain was elected lord mayor. The outgoing lord mayor, William F. O’Connor (1886–1960), was elected in three different electoral areas; as he could only accept a seat in one of the areas, two by-elections were required. Donal O’Callaghan, with an address of 58 Douglas Street, was nominated by Sinn Féin for the south area no. 1 by-election. With no other candidates, he duly claimed an uncontested seat on Cork Corporation and attended his first meeting in City Hall on 12 March. Little over a week later, in the early hours of Saturday 20 March 1920, unidentified members of the British forces, their faces covered in black paint, broke through the front door of the MacCurtain home on 40 Thomas Davis Street and assassinated the lord mayor. When the members of Cork Corporation met on 30 March, Terence MacSwiney was elected as lord mayor in succession to MacCurtain.

Though he was only a new member of the corporation, the ambitious Donal O’Callaghan was targeting a place on Cork County Council as well. He contested the June 1920 elections and topped the poll in the Ballincollig electoral area. At the first meeting of the new county council on 19 June, he was elected as chairman, after being nominated by Councillor Peadar O’Hourihane. Accepting the position, O’Callaghan addressed his fellow councillors in Irish and told them that everything they did would be dictated by their loyalty to Dáil Éireann, the government of the Irish Republic. Accordingly, the council unanimously passed a resolution declaring allegiance to the dáil.

Following a raid on City Hall by Royal Irish Constabulary (RIC) officers on 12 August 1920, Lord Mayor Terence MacSwiney was arrested. After a court-martial hearing, he was sent to Brixton Prison where he commenced a hunger strike, eventually dying on 25 October 1920. During this period, Donal O’Callaghan served as deputy lord mayor and travelled to London for MacSwiney’s funeral mass, held in St George’s Cathedral on 28 October. The following week, on 4 November 1920, O’Callaghan was unanimously elected lord mayor, for the period up to 23 January 1921. Five weeks later, much of Cork city was burnt to the ground by crown forces, including City Hall and the Carnegie Free Library. A devastated O’Callaghan, who had received multiple death threats and was living as a fugitive moving house each night, departed Cork as a stowaway on board the steamship West Cannon. He spent the next eight months in America, where he gave evidence to the Commission on Conditions in Ireland, delivered a series of high-profile speeches across the country and helped to secure a loan for Dáil Éireann, acting as the emissary of Michael Collins (qv).

When O’Callaghan returned to Cork in August 1921, he did so as a member of the second dáil, having won an unopposed seat in May’s general election. As a TD, he took an anti-Treaty stance, delivering a landmark speech on 3 January 1922 in which he criticised the rancour of the Treaty debates, telling his fellow deputies: ‘I take the view that every member of the dáil has sufficient brains and sufficient intelligence and a sufficient conception of his responsibility from every point of view to decide for himself or herself what the course of action to be taken is’ (Dáil Éireann Treaty debate, 3 Jan. 1922, vol. T, no. 10). At the end of the month, O’Callaghan accepted the nomination of Éamon de Valera (qv) to attend the Irish Race Convention, held in Paris. In June he suffered a humiliating defeat in the general election. Despite being lord mayor and an incumbent TD, he finished last of seven candidates in Cork city.

In August 1922 O’Callaghan departed Cork and never again resided on Leeside. He had no stomach for the civil war and was broken-hearted by the deaths of two close friends, Cathal Brugha (qv) and Harry Boland (qv). Having witnessed the centre of Cork city destroyed during the war of independence, he had no intention of seeing it ruined again in a battle between Irishmen and departed for Europe where he spent three months pursuing his interests in literature, theatre and travel until de Valera brought an end to his sabbatical. Believing that the second dáil had not been properly dissolved, de Valera formed an alternative republican cabinet which featured O’Callaghan as acting ‘minister’ for local government (Seán T. O’Kelly (qv) was in prison) and later ‘minister’ for foreign affairs. In June 1923 de Valera appointed O’Callaghan as the republican envoy to the US, replacing Laurence Ginnell (qv). O’Callaghan worked closely with the Irish American community and raised funds for the August 1923 general election, which was won by the new pro-Treaty government party, Cumann na nGaedheal.

With de Valera in prison and a new pro-Treaty government in place, O’Callaghan began to withdraw from political life. On 25 January 1924 he sent a letter to Cork Corporation, resigning his position as lord mayor; (he held onto his position as chairman of Cork County Council throughout 1924, before being replaced by David Leo O’Gorman (1865–1945) in 1925). O’Callaghan served as lord mayor of Cork for a total of 1,182 days: his first mayoral election success was on 4 November 1920; he was then re-elected in January 1921 (in absentia), January 1922 and January 1923 (in absentia).

In summer 1924 he married Eibhlín Ní Shuilleabháin in London, at the Holy Trinity Church in Bermondsey; they had no children. They lived in London and later in Strasbourg before returning to Ireland in 1929. O’Callaghan secured a job as an accountant in Athlone, and then Dún Laoghaire, for the Electricity Supply Board. It is remarkable that a man who was such a central character in the republican cause from 1916 to 1924, someone who had been a trusted ally of both Michael Collins and Éamon de Valera, withdrew so quickly and quietly from politics and the public spotlight. O’Callaghan was a very strong-willed and stubborn man and, once he made his mind up to walk away and begin a new chapter in his life, he was not for turning. He shunned the limelight, did not keep diaries, did not write an autobiography and was unwilling to provide a written statement to the Bureau of Military History. He also refused to be interviewed by his former colleague, Ernie O’Malley (qv), who travelled around Ireland in the 1940s and 1950s speaking to survivors of Ireland’s struggle for independence. Donal O’Callaghan died in Dublin’s Baggot Street Hospital on 12 September 1962, at the age of seventy-one. Cork’s forgotten lord mayor was laid to rest in Deansgrange cemetery, Co. Dublin.