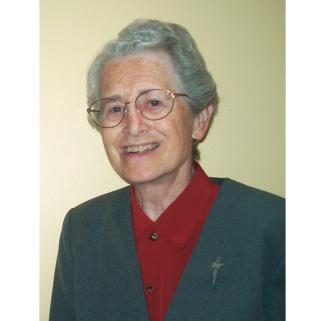 Maura O'Donohue
Copyright
Courtesy of the Medical Missionaries of Mary. All rights reserved

O’Donohue, Maura (1933–2015), missionary doctor and public health campaigner, was born on 2 March 1933 at Likeen, her family home in Kilfenora, Co. Clare, the second of four children (two girls and two boys) of Andrew O’Donohue, a farmer, and his wife Kate (née O’Brien). Mary Brigid, as she was christened, was educated locally before boarding at the Presentation convent, Mountmellick, Co. Laois. In her penultimate year she was inspired by the documentary film Visitation, which described the work of the recently founded Medical Missionaries of Mary (MMM) in Drogheda and Nigeria, and contacted the congregation’s founder, Mary Martin (qv). O’Donohue joined the congregation in September 1950, studied medicine at University College Dublin (1951–7) and completed her medical training at St Vincent’s Hospital, Dublin, and Our Lady of Lourdes Hospital, Drogheda. After graduating Bachelor of Medicine (MB), Bachelor of Surgery (B.Ch.) and Bachelor of Arts in Obstetrics (BAO) in 1957, she went to Anua, Nigeria, as a missionary doctor, and made her final commitment in the congregation there in 1959. Initially her name in religion was ‘Sister M. Andrew’, though she adopted ‘Maura’ in the late 1960s. In October 1959 she was elected to the order’s council (its youngest ever member, serving until 1962), and was appointed Martin’s assistant and personal physician (Martin endured chronic heart problems). They toured Africa, Asia and North America for six months and returned to Drogheda in April 1960, having visited over twenty countries.

O’Donohue studied theology (1960–61) at the Regina Mundi Institute in Rome, acquired fluency in Spanish in two years in Spain (1962–4) and briefly worked in Rome and Brussels with Cardinal Joseph Suenens. She then returned to Ireland to assist Martin, analysing and ingesting the teachings of the second Vatican Council of 1962–5. In 1966 Cardinal William Conway (qv) appointed her to an advisory board on the future of Maynooth College. She strongly supported the decision to admit both female and male lay students to Maynooth, as the theological college – and the National University of Ireland governed faculties of arts and science – broadened their intake in the late 1960s. In 1967 she served on the MMM congregation’s council, was regional superior in Europe (1967–9) and was on the general chapter (1969–70; 1979; 1991; 2003; 2009).

She broadened her medical knowledge as a registrar (1970–71) at Edinburgh Royal Infirmary and medical coordinator (1971–3) on MMM mission projects in Obudu, Nigeria, and completed an Master of Science (M.Sc.) in international community health at the Liverpool School of Tropical Medicine (1978). Having endured recurring bouts of severe malaria, she was posted from Nigeria to Ethiopia, where the disease was less prevalent, and treated those suffering from Hansen’s disease (leprosy) in Gambo (1974–7), the lone doctor in a remote hospital, managing medical, surgical and paediatric cases in straitened circumstances. After a brief spell in Kenya she returned to Ethiopia in 1979. By then fluent in Amharic, upon hearing reports of emerging famine, O’Donohue surveyed conditions and lobbied the regional authorities to organise food aid and assistance. The socialist regime, regarding aid organisations and religious workers with suspicion, was reluctant to publicly recognise the reoccurrence of drought or famine. In Addis Ababa O’Donohue sourced vehicles and food aid from international donors to initiate a nutritional programme which reached 36,000 people in six weeks and, working with the Ethiopian Catholic Secretariat, established major food aid and nutrition monitoring programmes. Famine relief work was combined with structured development programmes which delivered basic primary health care training to communities. Sanitation training, and the safe burial of famine victims, significantly minimised the prevalence of cholera and typhus, and she insisted that the projects she managed were evaluated by external international experts. Throughout her famine work (1983–8), she was required to report to the regime every two weeks and endured frequent lengthy interrogations. On one occasion she had to flee the field under threat of violence from local militia, returning only when the central government assured her security. Elements of the regime gradually came to respect her effectiveness and she was commissioned by the government to evaluate primary health care services across Ethiopia.

In 1988 O’Donohue began working with the UK-based Catholic Agency for Overseas Development (CAFOD) and was soon appointed to lead their newly founded HIV/AIDS programme. She successfully coordinated and implemented testing and counselling programmes alongside education and information projects, and CAFOD became the lead agency for HIV/AIDS within Caritas Internationalis, the international umbrella body for national catholic development organisations. By the mid-1990s she was running ninety-five such programmes for CAFOD, and many more on behalf of other catholic development agencies across the world. Recognising the efficacy of condoms in preventing the spread of HIV/AIDS, she raised awareness of their use and benefits, using her extensive international contacts to lobby and seek funding from national and regional bishops’ organisations, conferences of religious and lay religious organisations. With Rev. Robert Vitillo of Caritas Internationalis, she was often invited to present seminars on HIV/AIDS to church leaders. She played a pivotal role in informing the global catholic church about the disease and was widely respected in the international development community.

A keen observer of the impact of HIV/AIDS on a range of development issues, she discerned that poverty and marginalisation magnified its impact, especially on women. After she informed Cardinal Basil Hume, head of the catholic church in England and Wales, of repeated reports of sexual abuse and the impregnation of lay and religious women by catholic clergy, he urged her to investigate. Caritas Internationalis, in conjunction with an informal grouping of catholic moral theologians, organised a symposium on HIV/AIDS on 6–9 January 1994 at the Redemptorist Marianella Pastoral Centre in Rathgar, Dublin. O’Donohue and Vitillo presented an international audience with startling findings that included documented reports of the rape of women religious by priests in several countries (Manning). Priests often justified their actions as relieving them of the need to have sex with other women and reducing their risk of being infected with HIV. (Some believed that having sexual intercourse with virgins was a prophylactic against AIDS, and others that it would cure them of the disease).

In February 1994 Hume presented O’Donohue’s report to the Vatican. It detailed a concerted pattern of sexual exploitation and rape of women religious by priests and some bishops over the previous six years in twenty-three countries (including Ireland, Nigeria, the Philippines, Tanzania and the USA). The report noted that sisters were often urged to take the contraceptive pill, which they were told would prevent HIV transmission, and that some had abortions procured for them by the priests who impregnated them. Other pregnant women religious left or were turned out of their orders and some were forced into prostitution due to penury. The document concluded ‘the church will be judged not only by its response to HIV/AIDS, but also on its perceived hypocrisy and apparent duplicity in this context’ (‘Memo from Sr. Maura O’Donohue MMM’, 9 Mar. 2001).

On 18 February 1995 O’Donohue was invited to the Vatican to meet Cardinal Eduardo Martinez-Somalo, who as chief administrator of the Holy See (1993–2004) and head of the Congregation for Institutes of Consecrated Life and Societies of Apostolic Life (1992–2004) directly oversaw religious congregations and orders. Urging an apostolic visitation to investigate sexual exploitation and rape, she requested greater guidance from the Congregation in such instances and emphasised the need to care for and support clergy and religious infected with HIV. While she sought to address these issues through internal church channels, the membership of the International Union of Superiors General, an umbrella body for women religious, were incensed by the report’s findings and Vatican inaction. It leaked a copy of O’Donohue’s 1994 report and her aide memoire of the February 1995 meeting to the respected American catholic weekly, National Catholic Reporter, which published them in March 2001. This roused an enormous outcry in the international media. Organisations with which O’Donohue had links sought publicly to distance themselves from her and she received a barrage of hate mail. O’Donohue, profoundly respectful of her Hippocratic oath, was uncomfortable with the leak. She ignored all media contact, requested her colleagues and friends do the same, and threw herself into field work until the furore died down. Later she was integral in forming the Working Group of the Union of Superiors General, established to support members of catholic religious communities living with and dying from AIDS.

In 1997 O’Donohue was recruited by the New York-based Catholic Medical Mission Board (CMMB) as deputy director and head of international planning. She had extensive prior experience distributing drugs in the field provided by the organisation. With the CCMB she designed and implemented drug treatment programmes targeting disease eradication and worked closely with US pharmaceutical manufacturers on long-term drug delivery initiatives, distributing $50 million of drugs annually to developing countries. Much of her work focussed on the former Yugoslavia, then engulfed in widespread civil war. To maximise the efficacy of programmes O’Donohue ensured they were accompanied by educational and public health initiatives.

In 1999 she returned to CAFOD as health and nutritional advisor to their disaster and emergency response teams. Among the areas she worked were Grozny, Chechnya, where she supported the efforts of Islamic Relief to feed vulnerable women and children and establish primary healthcare facilities and early childhood educational services. In 2003 she was one of the first aid workers to reach Baghdad in the aftermath of the US-led invasion of Iraq. There she established childcare clinics and nutritional support programmes. When not deployed to specific emergencies or disasters, she worked in the field on CAFOD food programmes in Kenya, Zimbabwe and elsewhere. Based in Dublin from 2003, she consulted for CAFOD and continued to travel the globe. In 2011 she was voted ‘Clare person of the year’.

During visits to Asia she recognised that many women who became infected with HIV were involuntary sex workers, illegally trafficked and held captive in appalling conditions. Her visits to brothels deeply affected her and she worked tirelessly to raise awareness of human trafficking and the horrific treatment of forced sex workers. She contributed to international interfaith initiatives to raise awareness and in 2005 was a founding member of Act to Prevent Trafficking in Ireland. She argued that the scourge of human trafficking ranked behind only the illegal trades in drugs and arms, and was controlled by the same international criminal organisations.

Diagnosed with leukaemia in September 2014, she moved to Aras Mhuire, Drogheda. She remained alert and interested, regularly playing scrabble until days before her death there on 3 May 2015. The eminent theologian Enda MacDonagh (1930–2021), a close friend, was a concelebrant at her funeral mass, held 6 May at the MMM congregation’s mother house, Drogheda; she was buried in St Peter’s cemetery in the town.

In addressing issues of gender, injustice, poverty, nutrition and public health, O’Donohue strove to identify underlying causes and related effects. She was deeply committed to social justice and alleviating the burdens of poverty and ill-health, which she noted fell heaviest on women. She excelled in planning and coordinating multi-agency aid and development programmes and with characteristic modesty described her own career as merely ‘getting other people to do their bit’ (Irish missionary sisters in Africa radio programme). In February 2019 Pope Francis’s announcements on the sexual abuse of women religious by catholic clergy brought her to international attention as major international publications – including the New York Times and Die Zeit – referenced her ground-breaking 1994 report. Her work in unearthing the sustained sexual abuse and exploitation of women religious across the global catholic church, widely recognised by experts and campaigners, remains largely unheralded in Ireland.