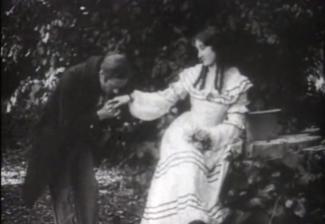 O’Donovan, Fred (1884–1952) actor, film maker, theatre manager and television director, was born Frederick George Saunders on 13 October 1884 at the family home in 43 South William Street, Dublin, to Robert Henry Saunders, coach builder, and his wife Eliza Anne (née Oakes). He was baptised into the Church of Ireland at St Ann’s Church, Dawson Street, Dublin, on 11 December 1884 and attended the Diocesan Intermediate School before working for a time in a land agent’s office.

In 1908 he joined the company of the Abbey Theatre, Dublin, taking the stage name Fred O’Donovan. Promptly cast in the lead part in W. F. Casey’s (qv) ‘The man who missed the tide’, he was an instant hit with Dublin theatregoers, emerging as a fully formed actor with excellent delivery and a straightforward method. As its juvenile lead for a decade from 1908, he was a model of the Abbey Theatre’s low-key naturalistic style, noted for his ability to switch seamlessly from earthy realism to rhapsodic flights, and back again.

He took over the title role from William Fay (qv) in ‘The playboy of the western world’ as the Abbey company performed this play in Dublin and at the Court Theatre in London during 1909. His interpretation of Christy Mahon went down well with audiences for having more charm and gaiety than Fay’s rather sardonic take. An admiring James Joyce (qv) believed that O’Donovan’s Christy Mahon was more in line with what John M. Synge (qv) had in mind when he wrote the part; George Moore (qv) thought similarly. O’Donovan dispelled much of the controversy that had surrounded this production on its debut in January 1907, helping to turn it into the Abbey’s commercial mainstay.

That year he also took the leading part of an American cowboy in the Abbey’s premier of George Bernard Shaw’s (qv) ‘The shewing-up of Blanco Posnet’, which had been banned from London theatres on the grounds of blasphemy. The Abbey’s staging of the play created a sensation, and the company toured it in England later in 1909. O’Donovan reprised the role several times, often declaring it his favourite. Although he affirmed his support for the Abbey’s policy of concentrating on rural dramas, he relished displaying his acting range in more sophisticated plays such as Shaw’s.

O’Donovan toured England almost every year with the Abbey up to 1914 and embarked on three successful US tours between 1911 and 1914. He was outstanding on the first American tour (September 1911–March 1912), once again portraying Christy Mahon in ‘The playboy of the western world’. Some Irish-Americans objected to the play as disrespectful towards Ireland, and there were protests and riots in Boston, New York and Philadelphia. In November 1911 the company was arrested in Philadelphia and charged with presenting plays likely to corrupt public morals. O’Donovan and his Abbey colleagues were tried in a local court where the judge dismissed the case against them.

Aside from Christy Mahon, he was lauded for his performances as the eponymous lead in ‘Maurice Harte’ and as Father Peter Keegan in ‘John Bull’s other island’. An oil painting by James Sleator (qv) of him playing Robert Emmet (qv) in ‘The dreamers’ hangs in the Abbey Theatre. In 1912 he married a fellow Abbey actor, Lilian Golding, daughter of Walter Henry Golding, building contractor; her stage name was Nora Clancy.

In 1916 O’Donovan, his wife, and others were recruited from the Abbey to work for the first Irish film company, the Film Company of Ireland (FCOI); this was on the understanding that their film work would not interfere with their stage appearances. Like the Abbey, FCOI dwelt on the Irish peasantry and sought to provide comic entertainment without falling into stereotype. O’Donovan starred as the villain in the company’s first production, O’Neil of the glen (1916), which opened in Dublin in August. Benefitting from its homegrown content, the film surpassed all expectations by establishing a box office record for the week. The FCOI proceeded with a series of comedies in which O’Donovan appeared, followed by a drama, The eleventh hour. The next year O’Donovan took on directing, first the comedy Rafferty’s rise, then When love came to Gavin Burke, starring in both.

FCOI took a leap forward in ambition with its eight-reel adaptation, nearly two and half hours long, of Knocknagow, Charles Kickham’s (qv) epic novel set in the time of the Irish famine and land clearances. O’Donovan directed and took a supporting role. Shot during the summer of 1917 in Clonmel and Mullinahone, Co. Tipperary, and released in early 1918 – thus benefitting from the growing anti-British fervour in Ireland – the film’s politics were only mildly nationalist, almost certainly because of the strict system of wartime censorship then prevailing. His directing favoured one- or two-take scenes shot from a largely stationary camera, skilfully positioned to make the best use of space.

A commercial triumph in Ireland, where it was shown across the country for two years, the film also did well in America with the Dublin Evening Telegraph reporting that it ran for three weeks in Boston. US film critics, however, dismissed the relatively primitive production: as there were no studios in Ireland, interior scenes had to be shot outdoors to get adequate light. Nearly all of FCOI’s films have since been lost except Knocknagow, which partially survives in the form of an incomplete print. O’Donovan made no more silent films, and FCOI ceased operations in 1920.

His withdrawal from filmmaking probably stemmed from his acceptance, in March 1917, of an invitation to become the Abbey’s manager from W. B. Yeats (qv) and Lady Gregory (qv). He kept acting and also started directing plays, including the first performances of ‘Blight’ (1917), ‘The Parnellite’ (1917) and ‘The lost leader’ (1918); he played the lead in the ‘The Parnellite’. During his tenure as manager the public showed more interest than ever before in the Abbey, and the theatre even made a small profit. He also recruited F. J. McCormick (qv), who was to become one of the Abbey’s great stars. Desirous of more money and irritated by Yeats’s new wife Bertha Georgie Yeats (qv), who he regarded as interfering, O’Donovan resigned in March 1919. He took several of the longer-serving Abbey actors with him and toured with them for a time before he moved to England.

By then, he had begun an affair with Muriel Jameson, daughter of a Dublin journalist. They lived together in England where they had a son, Paul, who was born in 1920 and later killed in action with the Royal Air Force in the second world war. His first wife Lilian sued for divorce, and O’Donovan and Jameson married in 1922. Muriel, however, died of pulmonary tuberculosis in 1924, aged twenty-five. In 1927 O’Donovan married the Irish actress Joyce Chancellor, daughter of John Chancellor whose firm were well-known photographers and clockmakers, and Cicely Chancellor, (née Granger), a singer. Betty Chancellor (qv) was Joyce’s sister. Fred and Joyce had a daughter, Joyceann, born in 1935.

From 1921 to 1934 O’Donovan was involved, either as an actor, director or producer, in over eighty plays in London; he also toured with plays in Britain, Ireland and Southern Africa (1925 and 1931). Many of these plays were part of the Abbey repertoire, or otherwise Irish-themed, and he was still playing Christy Mahon in 1930, twenty-one years after doing so first. He performed regularly alongside former Abbey colleagues also based in London, including Sara Allgood (qv), Arthur Sinclair and Máire O’Neill (qv). But he took opportunities for increasing his scope, taking on roles such as Aguecheek in ‘Twelfth night’ in 1922, Lopahin in ‘The cherry orchard’ in 1925, and appearing in ‘As you desire me’ by Pirandello in 1933, all in London. Although he regularly received good reviews from English theatre critics, he never achieved the status of a major star. The Irish comic Jimmy O’Dea (qv) attributed this to O’Donovan’s initial decision to focus on comedy roles when he was more a character actor, albeit one capable of playing ludicrous or uproarious parts well.

He continued to appear on the stage and began acting in British films, including a brief part as a detective in the Alfred Hitchcock film Young and innocent (1937). Aside from Knocknagow, his minor British film roles represent the only visual footage of him to have survived. When Britain’s first television station was started in 1936 by the BBC (which proclaimed it as the world’s first high-definition station), he was one of the first actors to appear. In early 1938 the BBC hired him as a television drama director, though the BBC then designated its directors as ‘producers’. He would act intermittently thereafter, mainly for BBC television. His first broadcast production was Sean O’Casey’s (qv) one-act comedy The end of the beginning on 5 April 1938. He directed a play a month until September 1939, with adaptations of Abbey plays featuring prominently in his output.

During this period, it was not yet possible to cut instantly from one camera to another; the picture dissolved instead, meaning television worked better when cuts were kept to a minimum. O’Donovan excelled at coordinating the movements of his actors to delay switching cameras, and at moving his camera to follow the actors around. It was done so smoothly that viewers never noticed the lack of cuts. He epitomised the early BBC broadcast style involving long takes, close ups and generally only having one or two actors on screen.

After the BBC’s television service closed with the start of the second world war in September 1939, O’Donovan worked in the BBC’s radio drama department as an actor and director and was involved in the BBC’s first family serial, The Robinson family. In 1944 he appeared in ‘The last of summer’ in the West End. He reverted to his pre-war role when the television service resumed in 1946. Between 1946 and 1950 he averaged nearly ten dramas a year, including ambitious broadcasts of Eugene O’Neill’s Annie Christie (23 July 1946) and Shaw’s Candida (6 October 1946). In 1946 he was given the prestigious Christmas evening slot, directing Noël Coward’s Hay fever. He seems to have had less input regarding his choice of material, as there were far fewer Abbey adaptations. In 1948 he made time to appear in Another shore, an Ealing Studios comedy that was set and filmed in Dublin.

During the late 1940s, O’Donovan was regarded as one of the BBC’s best directors, certainly its most reliable, becoming noted for typically using one camera in shooting lengthy scenes of up to thirty minutes. By then, technology had sufficiently advanced to allow instant cuts from one camera to another. For O’Donovan, however, cutting undermined the actors’ performance because they had to bear in mind from what angle they were being filmed. He stuck with using one camera for each scene, an approach that allowed actors to concentrate on playing to that camera for a sustained period.

From 1951 he suffered from ill health and increasingly eschewed tracking his camera around the studio, obliging the actors to crowd together, a tendency that drew criticism from television reviewers. He also received criticism within the BBC for persisting with his anachronistic one-camera technique, at a time when television drama was rapidly shedding its remaining links with traditional theatre. His final production came in 1952 when he was invited to Paris to demonstrate his one-camera technique. There, he directed an adaptation of Rebecca, which was broadcast in French on 9 June. He died in hospital in Northwood, London, on 19 July 1952 after contracting pneumonia following surgery on an obstructed intestine.

During his time with the BBC, O’Donovan directed sixty-eight shows for television and acted in another twenty-five. None of this material survives. In the later stages of his life, he had lived with his wife and daughter in Hampstead Garden Suburb, north London. He was cremated at Golders Green crematorium, and his ashes were scattered there. Some of his correspondence is held in the National Library of Ireland (NLI), along with drawings and cartoons of him. Witty and charismatic but secretive, he lied about his age, and his extensive entry in Who was who in the theatre contains several inaccuracies, hence the confusion in various sources about the year of his birth.