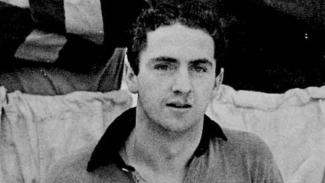 O’Flanagan, Michael (‘Mick’) (1922–2015), soccer and rugby international, was born on 29 September 1922 in Dublin, one of five children (four boys and a girl) of Timothy O’Flanagan, a tobacconist, and his wife Teresa (née McLaughlin). Raised in Terenure, he was educated by the Christian Brothers at Synge Street. He was a fine all-round athlete who set a national schoolboy record in the high jump that lasted until 1964. After impressing with the Dublin schoolboy soccer club Home Farm, in 1939 he joined Bohemian FC, the League of Ireland’s leading amateur club, and soon made a name for himself as a free-scoring centre-forward. Aged eighteen, he was top scorer in the 1940/41 League of Ireland, with 19 league goals, and that season scored 31 goals in 31 games in all competitions. He often lined out alongside his older brother Kevin (qv), with the latter’s blistering pace and hard shooting complementing Mick’s keen football brain and skilful ball control (despite his having to wear size-fourteen boots).

While Bohemians were one of the most exciting teams in the League, they failed to win any major national trophies during Mick’s time at the club. In 1945 he was on the losing side in the Football Association of Ireland (FAI) cup final against Shamrock Rovers before a record crowd of over 44,000 spectators at Dalymount Park, and in 1947 scored in the final against Cork United to earn a 2–2 draw, only to lose 2–0 in the replay. In 1945 he did however help Bohemians beat Belfast Celtic 3–2 on aggregate by scoring the winning goal in the final of the Dublin and Belfast Inter-City cup, a successful north–south competition (1941–9). In the 1947 Leinster Senior Cup final, he scored a remarkable six goals in Bohemians’s 11–0 victory over St Brendan’s (Grangegorman) of the Leinster Senior League. He continued to turn out for Bohemians until the early 1950s.

Mick earned his living as a publican, running the family pub, the Confession Box (so called because of its proximity to St Mary’s Pro-Cathedral), in Marlborough Street in Dublin city centre. On the afternoon of 30 September 1946, he was working there when he received a desperate phone call from a Bohemians member of the FAI selection committee asking him to take the place of the Irish team’s injured centre-forward Davy Walsh in a friendly international match against England due to start at 5.30 p.m. at Dalymount Park. Mick immediately ushered out his customers and shut the pub, and then cycled home to Terenure to collect his boots before pedalling over to Dalymount Park to win his first cap alongside his brother Kevin (they were the first brothers to play together for the FAI team). His preparation was far from ideal: the previous evening he had been entertaining a party of English journalists at Templeogue tennis club and did not get home until 2 a.m. The match was a major event. It was eight years since an international match had been played at Dalymount and England’s visit was a major event, representing the first time that a team from any of the UK associations had agreed to play the FAI team since it split from the Belfast-based Irish Football Association (IFA) in 1921. England were regarded as one of the best teams in the world and two days earlier in Belfast had easily overcome Northern Ireland by a score of 7–2. In Dublin, however, it was the home team who dominated the play, cheered on by a packed Dalymount crowd. The Irish could not convert their chances and, against the run of play, Tom Finney scored for England in the eighty-second minute to secure a hard-fought 1–0 win. Although he played well on the day, this was Mick’s only cap for the FAI team, the selectors generally preferring to favour professional players.

He was though a highly-regarded figure in the domestic game and helped the League of Ireland to a 1–0 over the Northern Regional League (the war-time name for the Irish League) at Windsor Park in Belfast on 7 April 1947. When Belfast Celtic undertook a tour of North America in May 1949, O’Flanagan was chosen as a guest player. This was no ordinary tour. Celtic had decided to withdraw from the Irish League after a brutal assault on their young centre-forward Jimmy Jones (qv) by Linfield supporters on 27 December 1948 at Windsor Park, and the tour was the last they would ever undertake. The highlight was a match on 29 May at Triborough Stadium, New York, against a Scotland team that had beaten England 3–1 at Wembley a month earlier to win the British Championship; Celtic upset the odds by winning 2–0. O’Flanagan played his part in the win but was offended by the sectarian taunting of some of the Scottish players and traded punches with the Glasgow Rangers winger Willie Waddell. After his strong performances on the tour, he was offered a professional contract with Glasgow Celtic, but declined, having no wish to play full-time. He remained proud of his association with Belfast Celtic, and regularly attended its reunions.

From 1943 he played rugby with Lansdowne FC and won a Leinster Senior Cup medal in 1949. A fast and elusive runner, he started as a wing-threequarters but moved to the centre, where his strong tackling was invaluable. His club form earned him a cap at centre against Scotland at Lansdowne Road on 28 February 1948, which Ireland won 6–0. While this was his only rugby cap for Ireland, it contributed to the team’s first Grand Slam victory that year, a feat not repeated until 2009. This was probably his greatest sporting achievement and he regularly attended reunions of the 1948 team. His 1948 appearance meant that he and Kevin (who played rugby for Ireland against Australia in December 1947) have the unique distinction of being the only brothers capped by Ireland at both soccer and rugby. Like Kevin, he may well have won more caps at both soccer and rugby but for the second world war and the suspension of international sport during his early twenties.

After retiring from sport, Mick concentrated on running his pub. The Confession Box was a magnet for sports journalists, and it was there that the Irish Soccer Writers’ Association was founded in 1960. A much-admired figure among Irish sports fans, Mick received an Opel League of Ireland Legend award in 1994 and with his brother Kevin was inducted into the Irish Rugby Writers’ Hall of Fame in 1997.

Mick O’Flanagan died on 13 September 2015 in St Vincent’s Hospital in Dublin, and after funeral mass in the Church of the Sacred Heart in Donnybrook was buried in Deansgrange cemetery. Predeceased by his brothers Kevin and Sean and sister Trixie, he was survived by his wife Carine (née O’Grady) and brother Charlie (d. 2018), who also played for Bohemians in the 1946/7 season.