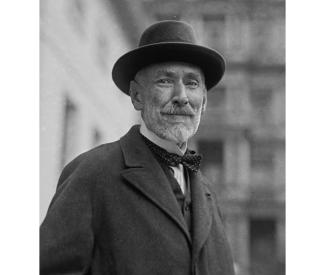 Plunkett, Sir Horace Curzon (1854–1932), cooperative pioneer, was born 24 December 1854 in the home of his maternal grandparents at Sherborne, Gloucestershire, England, third son and sixth child of the 16th Baron Dunsany. The Plunketts, originally Danish, but increasingly part of the Norman-Gaelic hegemony, had settled in Co. Meath in the twelfth century. By the late nineteenth century the family possessed a large estate with a castle at Dunsany, together with a sheep farm in Wales, a coalmine on Tyneside, and a boatyard in Hampshire.

Plunkett was educated at Eton (1868–72) and Oxford (1873–8) where he read history. Having encountered some of the ideas of the British movement for consumer cooperation, on returning to Ireland in 1878 he opened a cooperative store for his father's tenants. Threatened with tuberculosis, he spent spring and summer for ten years from 1879 ranching in the Powder River Valley on the eastern slopes of the Rocky Mountains in Wyoming, USA. Railroads were then opening up the American West, and his experience made Plunkett acutely conscious of the competition that America would pose for poorly equipped and poorly educated Irish farmers. Returning to Ireland on his father's death in 1889, he persuaded some aristocratic friends to join him in establishing a cooperative store based on the Rochdale model in Doneraile, Co. Cork. The experiment was not a success and, taking his cue from the cooperativisation of the Danish dairy industry via Laval's invention of the mechanical cream separator and steam-powered churn, Plunkett established his first cooperative creamery at Ballyhahill, Co. Limerick, in 1891.

An indefatigable pamphleteer, he persevered in spite of opposition from nationalist politicians and ‘gombeen men’ (trader-moneylenders). Supported by a small group of farsighted landlords and by a talented team consisting of Tom Finlay (qv), SJ, economist and social reformer; R. A. Anderson (qv), former subagent to Lord Castletown; George W. Russell (‘A E’) (qv), writer, painter, and mystic; and Harold Barbour, a member of a flax-spinning firm in Co. Antrim, he gradually won the trust of the Irish farmer. On 18 Apri 1894 a coordinating body, the Irish Agricultural Organisation Society (IAOS) was founded in Dublin with Plunkett as president.

Under the aegis of the IAOS the cooperative movement expanded rapidly. Four years later there were 243 affiliated societies. Once the movement had been launched, the commercial structure of Irish agriculture was firmly on the road to reform; next its administration must be tackled. Deftly exploiting the splits in the two Irish political parties (Plunkett had been elected a unionist MP for Dublin South in 1892), he persuaded Parnellite nationalists to join with the liberal unionists of Ulster in a demand for an Irish government department to develop agriculture (mainly for the south) and technical education (sorely needed by northern industry). The Recess Committee of which he was chairman (so called as it met in the parliamentary recesses of 1895–6) produced a report which forced the government's hand, and the act establishing the Department of Agriculture and Technical Instruction for Ireland (DATI), with Plunkett as vice-president, took effect in the closing months of 1899.

Apart from agricultural education, which fell naturally within its purview, the department took charge of technical (vocational) education and, on account of the primitive nature of Irish educational administration, Plunkett found himself in charge of scientific education everywhere but in the universities. It was not an opportunity he would have turned down, for scientific innovation and educational reform were two of his principal aims and, in his mind, were inextricably linked. ‘Whenever I set out on a mental excursion into Irish political, sociological, or economic questions’, he wrote, ‘no matter where I start, I always come back to education as precedent of all progress in Ireland.’

But his rapid rise to the top of the agricultural administrative tree had left Plunkett vulnerable on a number of fronts. He had been elected a unionist MP while head of an avowedly non-sectarian, non-political cooperative movement; then, at Westminster, his flirtation with the nationalists on ‘non-political’ issues had angered his true-blue unionist constituents. Finally, his political support depended on rifts in the two Irish political parties. The nationalists reunited under John Redmond (qv) in 1900, likewise the unionists in face of the home-rule crisis a few years later. At the election of October 1900 the unionists of Dublin South ran a hardliner against Plunkett, deliberately splitting the vote and handing the seat over to the nationalists. Supported by the Balfour brothers, Plunkett remained on as vice-president of the DATI, but his remarkable blueprint for Irish development, Ireland in the new century (1904), with its allusions to supposed defects in Irish character and the anti-industrial nature of catholicism, only added fuel to the fire, and in 1907 he was forced to resign his office.

Via Gifford Pinchot (head of the US Bureau of Forestry) Plunkett met President Theodore Roosevelt in 1906. The president had just established the Conservation Commission and was fascinated by the Irish cooperative story. Arguing that it was not enough to conserve natural resources without tackling the problems of rural life, Plunkett persuaded Roosevelt to establish his Country Life Commission and was involved, with Pinchot, in drafting the president's letter transmitting its report to congress. When war broke out in 1914 he devoted all his energies to persuading the United States to intervene on the side of Britain, France, and their allies.

With his exit from politics in 1900, and even more so on his retirement from headship of the department, Plunkett gradually abandoned constructive unionism to become a dominion home ruler. He was elected chairman of the Irish Convention established by Lloyd George in 1917 to tackle the Irish question. The Convention ended inconclusively a year later (it was boycotted by Sinn Féin). In 1919 he launched the Irish Dominion League, supported by the Irish Statesman, to emphasise the benefits of dominion home rule. In the same year he established the Plunkett Foundation to publicise the benefits of cooperation worldwide. On the establishment of the Irish Free State he accepted a nomination to the newly established Irish senate. During the civil war, on 29 January 1923, his house, Kilteragh, in Westminster Road, Foxrock, was bombed in a series of attacks on supporters of the government (Plunkett was in America at the time). It was burned out the following night. He moved to England where he resided at the Crest House, St George's Hill, Weybridge, Surrey. In 1924 the Plunkett Foundation also moved to England. He died in the Crest House on 26 March 1932.

Internationally Plunkett takes his place in the ranks of the great rural reformers; in his own country he is the pioneer of modernisation in Ireland's principal industry. He established a cooperative movement among Irish farmers, supported by protestants and catholics, by unionists and nationalists, by north and south. It is for this achievement that he is chiefly remembered, but his aims lay deeper. Plunkett tackled the problem of restoring a proper balance between town and country, between patterns of urban and of rural life, in an Irish countryside, once grossly overpopulated, then devastated by famine, and subsequently bled by emigration. A practical social philosopher as well as a cooperative enthusiast, he designed and put into effect a comprehensive scheme for the regeneration of country life, based on the twin pillars of cooperation and education; his three-pronged aim of introducing the scientific method to Irish agriculture, of reorganising rural commerce along cooperative lines, and of restoring a sense of dignity, a spirit of self-reliance, and an air of optimism to the Irish countryside, was neatly encapsulated in his famous slogan: ‘Better farming, better business, better living’.

He was elected an FRS (1902), knighted (1903), and awarded honorary degrees by Oxford (1906) and Dublin (1908). His diaries and private papers are held in the Plunkett Foundation, Long Hanborough Business Park, Oxfordshire. The headquarters of the Irish agricultural cooperative movement (later entitled the Irish Cooperative Organisation Society), located in the Plunkett House, 84 Merrion Square, Dublin, contains a portrait by Dermod O'Brien (qv), PRHA, and a bust by Derwent Wood; a portrait by John B. Yeats (qv) hangs in Dublin City Gallery The Hugh Lane. A full listing of his publications is in the biography by Trevor West (1986). The centenary of the IAOS was marked by the issue in 1994 of an Irish postage stamp depicting Plunkett (as in the O'Brien portrait), together with ancient and modern methods of transporting milk to creameries.