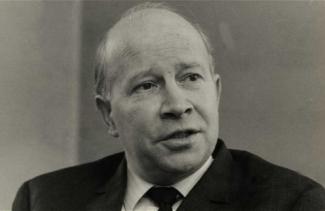 Porter, Robert Wilson (1923–2014), lawyer and politician, was born on 23 December 1923 in Derry city, eldest of four children of Joseph Wilson Porter, a joiner, and his wife Letitia (née Wasson). Throughout his life, he retained a strong attachment to his home city, which he always called ‘Derry’. Porter was affectionately known to friends and family as ‘Beezer’, an expression he used as a child to indicate contentment. A member of the Church of Ireland, he was a successful pupil at Londonderry Model School and Foyle College, winning a foundation scholarship to QUB, where he matriculated in 1941. In 1942–6 he served in the RAF Volunteer Reserve as a pilot and flight engineer, training in South Africa and attaining the ranks of flight sergeant, probationary pilot officer (February 1945) and flying officer (August 1945).

On demobilisation he joined the UUP and shared a platform with his future opponent Ian Paisley (qv) at celebrations of the UUP’s capture of the marginal Stormont constituency of Dock in 1949. In 1950 he joined the Territorial Army as a second lieutenant of artillery, becoming a captain in 1952 before transferring to reserve status in 1956. Always interested in the welfare of ex-servicemen, he served on the War Pensions Tribunal for Northern Ireland as vice-chairman (1959–61) and chairman (1961–6). He joined the Orange Order in 1955, later stating that he did so because of its commitment to uphold the British constitution and the protestant religion. He recalled being ‘brought up on the theory that all one had to do was to say ‘“no surrender” and that would be the end of the problem’ but later came to the opinion that unionism had to adapt to a changing world (Belfast Telegraph, 15 Aug. 1969).

After graduating with a first-class LLB from QUB in 1950, he was called to the Northern Ireland bar, became a part-time law lecturer at QUB and built up a considerable practice in both civil and criminal law. He served as junior crown counsel in Derry (1960–63), junior counsel to the attorney general of Northern Ireland (1963), and junior crown counsel for Co. Down (1964–5). In 1965 he became a QC and chaired the public inquiry examining objections to the Craigavon Development Commission (set up to oversee the construction of Craigavon, Co. Armagh).

His forceful performances as barrister and politician masked an inner diffidence which limited his ambitions in both spheres. He was a small, physically unimposing man and his preferred garb of suit, tie and bowler hat gave him a misleading air of conformism which overshadowed his working-class origin and considerable abilities. In private he was a witty conversationalist, fond of a glass of whisky. Mixing in Belfast artistic circles, he attended plays at the Belfast avant-garde Lyric and Group Theatres and befriended the painters William Conor (qv) and Markey Robinson (1918–99). His wide-ranging interest in Irish culture led him to take Irish language lessons, and he had a large repertoire of traditional songs (including Orange and nationalist ones) and a particular fondness for the songs of Percy French (qv), a former student of Foyle College.

Identifying with the liberal unionism of Terence O’Neill (qv), he entered electoral politics from a sense of civic duty and in November 1966 took one of the four QUB seats at Stormont in a by-election, narrowly defeating a Liberal, Albert McElroy (qv). As a backbencher he openly advocated ‘one man, one vote’ in local elections, socialised with nationalists in the Stormont bar, called for the UUP to recruit catholic members, and publicly and privately tried to persuade catholic bishops to recognise the state by attending official functions. In 1967 Porter supported O’Neill’s dismissal from cabinet of the hardliner Harry West (qv) over a technical conflict of interest. He supported liberal reforms and urged accommodation of catholic concerns in government education legislation. In October 1968, however, after the widely publicised police batoning of civil rights marchers in Derry, he accused the marchers of damaging community relations and failing to appreciate the need for the government to proceed gradually with its reforms.

University representation at Stormont ended at the 1969 election, with the four QUB seats redistributed to new constituencies in Greater Belfast. In November 1968 Porter was chosen as UUP candidate for the new Lagan Valley seat, defying opposition arising from his recent attendance at the funeral of a catholic judge. He was returned unopposed at the general election in February 1969 after a Paisleyite candidate was disqualified on a technicality. During the campaign he endorsed pro-O’Neill independents running against UUP hardliners, appealed for catholic voters to support the premier, and defended him against claims that he represented a clique of effete aristocrats.

On 8 January 1969 Porter was appointed temporary parliamentary secretary to the minister for home affairs, William Long (qv); he declined the junior ministerial salary. Three weeks later he became minister for health and social services after the resignation of William Morgan (qv) and in March 1969 was transferred to the Ministry of Home Affairs. In cabinet he urged prompt adoption of universal suffrage in local government elections, joining O’Neill in threatening to resign if the proposal was rejected. He unsuccessfully tried to persuade O’Neill not to retire and when a new government was formed by James Chichester-Clark (qv) on 1 May 1969 he retained Home Affairs on the understanding that he would serve for a limited time before returning to the bar. As street protests intensified, he had CS gas tested on himself to judge its suitability for riot control. He also pushed for the policing reforms recommended by the Hunt report to be implemented before Westminster imposed them, and in August 1969 publicly threatened to resign if the reforms were rejected by the UUP.

As the civil rights agitation intensified the Home Affairs portfolio became a focus for discontent, with left-wing protestors, Orangemen and Free Presbyterians all holding protests outside his home on the Malone Road. As a government minister Porter chose not to walk with his Orange lodge and resigned from the Order in 1971 over its insistence on prohibited demonstrations. His term began inauspiciously as his assertions that bombings directed against the Belfast electricity and water supplies were perpetrated by the IRA were repeatedly challenged by opposition MPs. (They were in fact a ‘false flag’ operation by loyalist paramilitaries.) In April 1969 he accused the Civil Rights Association of trying to create a state of anarchy and clashed with nationalists such as John Hume (1937–2020) over police handling of demonstrations, their failure to investigate and prosecute loyalists who attacked People’s Democracy demonstrators at Burntollet, and Porter’s frequent comparison of nationalist/republican propaganda to the work of Nazi propagandist Josef Goebbels.

While opposition MPs saw most unionist politicians as incorrigible, they accepted that Porter sincerely sought to implement reforms and accommodate nationalist sensibilities. During his fifteen months as minister of home affairs Porter devised and piloted through debates an extensive legislative programme including the Public Order (Amendment) Act, local government reform, the establishment of a commissioner for complaints in response to the 1969 Cameron Report, and the Protection of Person and Property Act aimed at suppressing intimidation and street violence. As violence grew, in August 1969 he formally requested the deployment of British troops to support the civil power when he accompanied Chichester-Clark to a meeting with UK home secretary James Callaghan, despite warnings that this endangered the survival of Stormont. The deployment on 15 August, after rioting in Derry and Belfast, was followed by a hapless performance by Chichester-Clark, Long and Porter at a press conference with international journalists outraged after witnessing destruction caused by loyalist rioters in nationalist areas of West Belfast.

Porter served on the committee set up to co-ordinate security policy and in 1970 oversaw the formal disbandment of the Ulster Special Constabulary (USC) and the disarming of the RUC. This elicited fierce opposition from unionist hardliners led by William Craig (qv), Paisley and Desmond Boal (qv): Paisley repeatedly accused him of betraying the USC, while in parliament four successive speakers implicitly blamed him for RUC deaths during riots. Porter denied hardliners’ claims that reforms were dictated by Westminster, stating that he would resign if this were attempted. Nationalists criticised his defence of the USC record and recruitment of former USC members to the newly established UDR and RUC Reserve, claiming that although Porter was a genuine reformer, he was being pressurised out of government.

On 26 August 1970 he resigned from the cabinet, stating that he had accepted office on a temporary basis as a civic duty, continuous strain was damaging his health, and his financial situation and family commitments required his return to the bar. He was knighted in the 1971 new year’s honours. As a backbencher he defended government policy, and allegedly refused office when Brian Faulkner’s (qv) government was formed in March 1971. In May 1971 he testified before the Scarman Tribunal on disturbances in Northern Ireland, producing police intelligence reports on IRA infiltration of the civil rights movement. After the suspension of Stormont, Porter criticised Faulkner’s attempts to preserve party unity by conciliating right-wingers and appearing at public meetings with William Craig, who advocated a unilateral declaration of independence. Porter called on the UUP to recognise that the future lay through integration with Britain (defined as allowing for a devolved assembly without the misleading trappings of a sovereign parliament). This led to a vote of no confidence in Porter by the Lagan Valley constituency executive, and in June 1972 he resigned from the UUP, denouncing it for becoming ‘a right-wing protestant party’. During a subsequent debate in Dublin with the Labour TD Dr John O’Connell (qv) over the Irish constitution’s territorial claim to Northern Ireland, Porter said he was proud to be an Irishman and simultaneously attached to the British connection and his British citizenship. Recognising that Britain was not unconditionally committed to the union, he was prepared to accept a united Ireland achieved by persuasion but argued that nationalists must recognise that unity required cross-community reconciliation in the North and across the island, and that the unionist sense of Britishness would not easily be dispelled.

In March 1973 Porter formally joined the cross-community, pro-union Alliance Party. He resigned his Lagan Valley seat and never stood for election again. Appointed crown prosecutor for Belfast, he prosecuted several terrorist cases, and in March 1977 secured the conviction of twenty-eight UVF members after a complex six-month trial. As a county court judge (1978–93) and recorder of Belfast (1993–5), he acquired a reputation for firmness, insight and humanity, not least towards inexperienced younger barristers; John Larkin, attorney general of Northern Ireland at the time of Porter’s death, described him as ‘the fairest and wisest county court judge of his generation in cases of all types’ (quoted in Lexden).

Porter and his wife Kathryn (a doctor and chair of the Muscular Dystrophy Association of Northern Ireland) had a son and two daughters, the younger of whom died aged three in a motor accident; his wife also predeceased him. After a long illness, he died in Belfast on 25 May 2014 and was buried in the graveyard of the Holy Trinity Church in Drumbo, Co. Down.

During his brief and intense public career perceptions of Porter were mixed, with many pro-nationalist commentators dismissing him as a short-sighted mediocrity. He is now more recognised as a genuine and frequently courageous liberal reformer placed in an impossible situation. He reflected a generation, shaped by the second world war and the opportunities opened by post-war British economic and social modernisation, in which unionist identification with Britishness was at its height. The limitations and blind spots of this form of ‘Ulster Britishness’ and its failure to prevent the Troubles should not occlude the role of its better representatives, including Porter, in helping to contain the disaster.