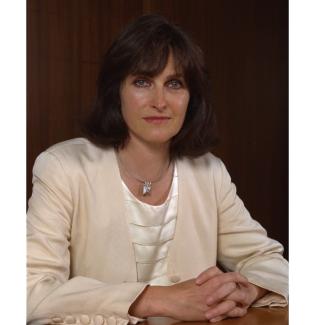 Redmond, Mary (1950–2015), solicitor and founder of the Irish Hospice Foundation, was born on 25 August 1950, third in a family of six girls and a boy, to Dr John Redmond, civil servant, and his wife Mary (Máire) (née Lannin). She described her childhood in the family home on Mount Eden Road, Donnybrook, as happy, loving and strongly catholic. Her mother Mary was from a farming background in Cork and while working in the civil service had met John Redmond, who went on to become chairman of the Revenue Commission. John (also known as Seán Réamonn) was a learned man with a primary degree in Latin and Irish, a masters in Spanish and a doctorate in economics, and passed his love of learning to all his children, giving them individual lessons in Latin. Until the age of eleven Mary Redmond attended Muckross Park School, and then moved on to Loretto College on St Stephen’s Green, where she took her leaving certificate at the age of sixteen.

Although she wanted to study law, her father discouraged her from becoming a barrister, warning her that girls without family connections did better as solicitors. Heeding his advice, she undertook a law degree at University College Dublin (UCD) while also taking the exams of the Incorporated Law Society. She graduated with a Bachelor of Civil Law (BCL) at the age of nineteen and sat her Master of Laws (LLM) final exams the following year, before serving an apprenticeship with Niall McLaughlin at Arthur Cox solicitors. On the advice of John Kelly (qv), dean of the UCD law faculty, in 1972 she applied for and secured the Winter Williams scholarship to undertake a doctorate at Somerville College, Oxford. As a postgraduate, she was expected to teach in addition to her research and the strain of trying to do both proved too much. She returned to Dublin in 1977, taking up a lectureship in UCD where she introduced a course in labour law, concentrating on trade-unions, collective bargaining and industrial disputes. After receiving a British Council award, she moved to Cambridge and in 1981 was made a fellow of Christ’s College and awarded a Ph.D. for her thesis on comparative dismissal law (published two years later as Dismissal law in Ireland).

Redmond forged a successful academic career in Cambridge, rising to become dean of studies in law at Christ’s College. In 1984 while on sabbatical leave in Dublin, her life was upended by a family crisis. She had already decided to move back to Ireland and establish a law practice there when on 6 January her father suffered a massive cerebral haemorrhage leaving him quadriplegic. It was at this point that she became aware of the painful dilemma facing the families of the chronically ill in Ireland. Her father’s condition had plateaued to the point where the acute hospital wished to discharge him, but he was too unwell for a nursing home, and homecare was out of the question. After several months of waiting, in October 1984 John Redmond was eventually admitted to Our Lady’s Hospice, Harold’s Cross, where he died on 12 January 1985.

Her father’s illness proved a turning point in Redmond’s life. She completed the return to Ireland in 1985, establishing her own solicitor’s firm which later merged with Arthur Cox in 1995. As a CEDR (Centre for Effective Dispute Resolution) qualified mediator, she continued as a consultant solicitor, advising clients such as Aer Lingus and Ryanair on employment law. She was also director of the Labour Relations Commission for two terms and was consistently rated as one of Ireland’s top employment lawyers. Her expertise was also widely sought after in other areas. She was deputy governor of the Bank of Ireland, a director of Campbell-Bewleys, a member of the RTÉ Authority, a board member of the Smurfit group and Royal Liver Insurance, a council member of the Institute of Directors UK, a fellow of the Royal Society of Arts and a member of the governing body of Cricket Ireland. In recognition of her knowledge and experience, she served on the government’s white paper taskforce on a framework for supporting voluntary activity (2000) and on the taoiseach’s taskforce on active citizenship (2008). She also remained firmly committed to the study of law in Ireland, publishing extensively on the subject, including the seminal texts Dismissal law (1999) and Strikes – an essential guide to industrial relations (2010), co-written with Tom Mallon.

It was, however, her father’s illness and the difficulties of trying to find a dignified way for him to live his final months that proved the greatest catalyst in her life. Speaking at the inaugural Dr Mary Redmond Foundation Day lecture in 2004, she recalled that weeks after her father’s death in January 1985, she told her then fiancée (later husband), Patrick Ussher, that ‘there are going to be more hospice beds in Dublin. I need your support’ (Irish Hospice Archive, 13 Feb. 2004). From that point, Redmond used her legal expertise and corporate contacts to drive the hospice movement in Ireland forward, first establishing the Irish Hospice Foundation (IHF) charity. She brought together diverse interests such as the Daughters of Charity, the Capuchin friars, the businessman Michael Smurfit, architect Tom Murphy, and the Department of Health to build St Francis Hospice in Raheny. The initial building included a nineteen-bed inpatient unit, a bereavement and education centre, and a house for outpatient services. When the need outgrew the original building, work began in 2009 on a new facility in Blanchardstown and in September 2014 St Francis Hospice Blanchardstown opened.

After the practical difficulties she encountered when establishing the IHF, Redmond concluded that there was a need for an ‘enterprise body’ to help start-up charities. Her vision was for a national network of charities, community and voluntary groups, clubs and associations that would come together to exchange expertise and experiences. In 1999 she founded The Wheel, a national association intended as a ‘one-stop-shop' for charities, community and voluntary organisations and social enterprises. In 2022 it has more than 1,100 members.

When faced with a cancer diagnosis of her own, Redmond chose to ‘surrender her fears to God and to live’, according to her son Patrick (Irish Catholic, 3 Nov. 2016), focusing her energies on doing things that were meaningful to her – in particular, meditation and writing. She spent at least an hour meditating every day and in 2013 published The pink ribbon path under her married name Mary Ussher, detailing how she lived with cancer. She also wrote a children’s book, Marlena the fairy princess and toured the US in 2014 to promote it.

Mary Redmond Ussher died in hospital on 6 April 2015 and was buried after a private service. She was survived by her husband and son, her mother, four sisters and brother. In tribute to their founder, The Wheel published an appreciation on 11 May 2018, in which they described Redmond as compelling and charismatic, a leader and a visionary. It also spoke of her utmost humility, a vivacious and ever-present sense of fun, and a childlike belief in the goodness of people: ‘her life demonstrates what active citizenship means when put to the service of the common good. She was truly one of Ireland's most distinguished citizens of her generation’ (wheel.ie/our-founder).

In recognition of her contribution to Irish society and academia Redmond received many accolades during her lifetime, including an honorary fellowship from Cambridge in 2004 and an honorary doctorate in law from Trinity College Dublin in June 2014. Several awards have been established in her honour: the Employment Law Association of Ireland (ELAI), with the support of Arthur Cox, offers a student bursary for €1,500; the Dr Mary Redmond Medal, sponsored by the IHF, is presented in recognition of the role that health and social care professionals play in providing psychosocial, spiritual and bereavement care and support to those with life-limiting illness and their families; and The Wheel’s Dr Mary Redmond Honorary Award honours an individual or group who has contributed in an exceptional way to the advancement of the community and voluntary sector.