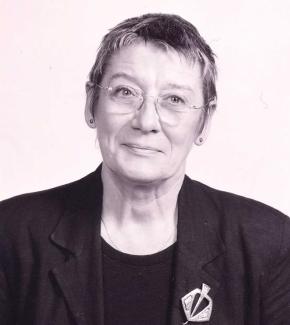 Reid, Christina (1942–2015), playwright, was born on 12 March 1942 in Ardoyne in North Belfast, the eldest of three children and only daughter of James Orchin, a Belfast dock worker, and Christina Orchin, who worked as a linen mill worker and later a waitress. Although the family resided in the predominantly catholic area of the Ardoyne neighbourhood, both the maternal and paternal sides of Reid’s family were protestant and staunch unionists. Her father was a Grand Master in the Orange Order, and she recalled that during her upbringing the most important day of the year was 12 July. Educated at Everton Primary School on the Crumlin Road, Belfast, she entered the Belfast Model School for Girls, located off the Oldpark Road in North Belfast. In 1957 she left school at age fifteen and spent the following years working in a soft drinks company, in the clothing business and in public service. In 1963 she married Michael Reid, a civil engineer, and gave birth to three daughters: Heidi, Tara and Siubhan. In the late 1970s Reid returned to school and completed her O- and A-level exams; in 1981 she started a degree programme in English at Queen's University Belfast.

Her plans to pursue a conventional degree began to change when she was announced the winner of an Ulster Television drama award in 1981. In December 1980, she had submitted a script for a sixty minute one-act play entitled, ‘Did you hear the one about the Irishman…?’. This was her first attempt to write a script for any medium, but she quickly redirected her career to take advantage of the opportunities the prize provided. Although the play was not staged until 1985, Reid’s award opened up opportunities for her to develop professional relationships at Belfast’s Lyric Theatre, which led to her 1983–4 tenure as writer-in-residence. By this time Reid had become a single parent to her three daughters, through divorce, and withdrew from university to pursue a career as playwright.

As a forty-year-old with no theatre experience, her residency at the Lyric provided intensive training on the process of developing a script for the stage. A draft of ‘Tea in a china cup’ had earned her a Thames Television playwriting award early in 1983, and would become her first staged play, premiering at the Lyric on 9 November 1983. This memory play, told in flashbacks, chronicles more than three decades in the life of a protestant family from 1939 to 1972. While Reid resisted describing herself as a feminist writer, the play’s emphasis on the experiences of three generations of Belfast women – Beth, her mother Sarah, and her grandmother Annie –mirrored Reid’s own childhood, which was defined by her strong relationships with her mother, grandmothers and aunts. The play focuses on the lives of these women, whose families are defined by decades of service and sacrifices by husbands, brothers and sons to the United Kingdom.

For her next staged play, Reid returned to ‘Did you hear the one about the Irishman…?’, which was premiered by the Royal Shakespeare Company during its 1985 tour of America, and in 1987 was revised for production by the King’s Head Theatre, London. The nine scenes alternate between catholic sites (like the Rafferty House or The Catholic Compound) and their protestant equivalents (the Clarke House and The Protestant Compound), and depict the romance between catholic Brian Rafferty and protestant Allison Clarke. Set in 1987, the play’s tender Romeo-and-Juliet tale of love amid sectarian hatred is repeatedly punctuated by the increasingly febrile exchanges between ‘the Comedian,’ a type of stand-up comedian who is a meta-character separate from the action, and ‘the Irishman’, the butt of his jokes. Over the course of the drama, Brian and Allison look back on their families’ friendship which has been severely strained by the Troubles, as they prepare their families for their decision to marry. However, the sectarian paramilitaries that lurk barely off stage ban the marriage and finally claim the lives of both lovers.

1986 was a significant year for Reid that marked the production of her first radio play, ‘Last of a dyin’ race’, written for BBC Radio 4, and also ‘Joyriders’, which transferred to the Lyric two months after its premiere at the Tricycle Theatre, London, on 13 February. ‘Last of a dyin’ race’ won the Giles Cooper award for radio drama and was developed for television in 1988; though her first radio play, it stands out as the most successful of the ten original works for the medium she produced between 1986 and 2005. It continues Reid’s focus on Northern Irish women and their multi-generational engagement with tradition, as represented in the wake being held for Lizzie McCullough, and it also continues the debate started in ‘Tea in a china cup’ over whether these traditions are holding back necessary social progress.

Of her early plays, ‘Joyriders’ (1986) and ‘The belle of the Belfast city’ (1989) are also noteworthy. She began ‘Joyriders’ during her residence with the Lyric to portray the experiences of working-class youth, who had known only the world of the Troubles. To research the play, she visited several youth training programmes throughout Belfast and interviewed the teenagers at them. ‘Joyriders’ proved so successful, she followed it with ‘Clowns’, premiered on 21 March 1996 in The Room at the Orange Tree, Richmond, London, returning to four of the same characters from ‘Joyriders’ as the 1994 ceasefire begins. ‘The belle of the Belfast city’ was her last play for the Lyric and relies upon what was by then Reid’s formula: a focus on three generations of Belfast women in a family with longstanding loyalist associations. It develops the depth and complexity of this dynamic by portraying the youngest, Belle, as a young black British woman who has been raised in London and is visiting her Belfast relatives for the first time.

Reid married the English actor Richard Howard in 1987 and moved with her daughters to Twickenham, which would be her primary home for the remainder of her life. A professional recentring of her career accompanied this domestic relocation. After 1989, when ‘The belle of the Belfast city’ premiered at the Lyric, her later work tended to be for English theatres and radio. Indeed, only one of her plays from 1989 to 2007 was premiered in Northern Ireland: ‘The understudy’, staged by Belfast’s Tinderbox Theatre Company in 2003. During these years she had three works premiered by the National Theatre in London (1999, 2003, 2007), two with London’s Orange Tree Theatre (1996, 1996), one with the Young Vic (1989), and one with the Nottingham Playhouse (1992). A similar shift is evident in her radio drama. Since BBC Radio 4 dominates radio drama production throughout the United Kingdom, it is not surprising that it produced eight of her eleven works for radio from 1986 to 2005, with only ‘Today and yesterday in Northern Ireland’ (1989) produced by BBC Radio Ulster.  Despite living in England, she remained involved with the arts in Belfast, serving on the Linen Hall Library’s board of governors and as patron for Youth Action Northern Ireland’s Rainbow Factory School of Performing Arts.

Writing on his blog ‘Scenes from the bigger picture’, the Irish scholar Patrick Lonergan observed that Reid ‘found it difficult to have her work produced from the 1990s onward’, and this emphasis on her early works from ‘Tea in a china cup’ (1983) through to ‘The belle of the Belfast city’ (1989) is reflected in the scholarship. Not only does the Methuen edition of her plays include only one play after 1989 – ‘Clowns’ of 1996 – but this focus on her first plays is reflected also in the criticism of Foley (2003), Große (2010), and Tracie (2018).

Reid died of pancreatic cancer on 31 March 2015. The Christina Reid Archive is part of the Performing Arts Archive at the Linen Hall Library, Belfast.