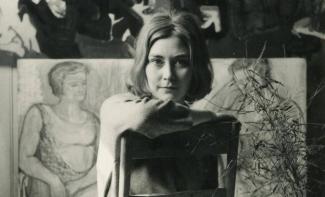 Rice, Noreen (1936–2015), artist, was born in east Belfast on 19 February 1936, the second of two children of Johnny Rice, a master mason, and his wife Nell (née Hayes). During the second world war her father joined the British army and her mother took work in a munitions factory, supplementing the family’s income by singing. Rice attended Mountpottinger Public Elementary School for primary education, followed by the Methodist College (‘Methody’) from 1947–50. When she was just thirteen, her parents travelled to Africa for her father’s work while she stayed in the family home with lodgers. She was an avid reader of literature but otherwise not academic and at school focused her efforts on art, for she which was awarded prizes.

Upon leaving school Rice half-heartedly undertook a secretarial course, and moved to a cottage near Castlewellan, Co. Down, where she painted. Though she received no formal training in art, in 1951 she was introduced by her piano teacher to the artists Gerard Dillon (qv) and George Campbell (qv) who mentored her. Her emergent style, embracing both surrealism and primitivism, showed the influence of her mentors, with whom she would be closely associated until their deaths in the 1970s. She also became acquainted with Jack B. Yeats (qv) in the early 1950s. The story goes that the two sketched each other, and not liking his sketch of her, Rice tore it up – an action she deeply regretted later.

Aged eighteen she undertook the month-long journey to Hong Kong, where her father was then working, and stayed for three years (1954–7). She worked as a typist there and continued to develop her art, holding her first solo exhibition at the British Council in Hong Kong in 1956. She next moved to London in 1958, where she lived with her brother Hal, renting a flat at the large house Gerard Dillon shared with his sister Mollie on Abbey Road, St John’s Wood. She took a clerical job at the BBC and painted in her spare time. The Abbey Road property was home to several other artists during her time there, including Arthur Armstrong (qv). During this experimental phase, she and Gerard Dillon would tour junkyards together and incorporate found materials – tin, wire, wood, leather – into their respective collage artworks. Rice exhibited prolifically, and mainly in Ireland, during these years, including in group and solo shows at the Hendriks Gallery, Dublin (1959, 1963–6); the New Vision Centre (1961) in London, which promoted the work of emerging international artists; the Oireachtas (1962); the Royal Hibernian Academy (RHA, 1965); and several times at the Irish Exhibition of Living Art, which championed expressionist and avant-garde art. In 1963 she was one of a delegation of thirty Irish artists sent by the government to the United States. There they met President John F. Kennedy just three weeks before his assassination and exhibited in New York.

She moved to Paris in 1967 where she spent time in the studio of Argentinian artist Julio le Parc. She took up lithography and studied etching at Centre de Gravure, Geneva, with a bursary from the Swiss Arts Council. She continued to be a favoured artist at the Hendriks Gallery, Dublin, where she had solo and group shows in 1968, 1970, 1972 and 1974, and at the Tom Caldwell Gallery, Belfast, where she participated in group shows in 1971 and 1974, exhibiting both etchings and paintings. Of her 1971 work at the Belfast gallery, Fortnight critic Ray Rosenfield stated, ‘The name Chagall springs to everyone’s lips at first glance at Noreen Rice’s pictures … but the extraordinary thing is that Noreen Rice herself had never seen anything of Chagall’s until a couple of years ago when she had already created her own private world that so astonishingly corresponds to his.’ (Fortnight, 19 Feb. 1971)

Rice returned to London for a further two years (1971–3); her friend and mentor Gerard Dillon died in June 1971. She lived in Ireland from 1973 to 1990, basing herself first in Fermanagh and then Belfast in the 1980s. She did not have a strong head for business, nor did she paint to order, and so for much of her career she had to supplement her income with other work, often cookery. Her career slowed somewhat as she raised her children, but she took part in the 1987 Irish Exhibition of Living Art, and held her first solo exhibition for a number of years at the Cavehill Gallery in Belfast in 1990. She again returned to London from 1990 to 1999, spending time in Spain during those years. In 1997 she collaborated with the Spanish artist Felix Anaut to create large pictures of Adam and Eve in front of an audience for the Daroca Arts Festival near Zaragoza. She finally settled in Monaghan in 1999, following several residencies at the Tyrone Guthrie Centre in Annaghmakerrig (from 1985). She worked on the Centre’s archives too, and made her home in the village of Newbliss.

Rice produced her last major work in 2005 when the Duchess of Abercorn commissioned her to paint the shutters of four large windows at Pushkin House, a building on the Baronscourt estate near Omagh, Co. Tyrone, named for the duchess’s relative, the Russian poet Alexander Pushkin. A retrospective exhibition of Rice’s work was held at the Market House in Monaghan town in 2009, and in 2011 she was among twenty artists, including Gerard Dillon, to feature in an exhibition titled The surreal in Irish art at the F. E. McWilliam Gallery, Banbridge, Co. Down.

Favourably compared to Dillon, Campbell and Chagall many times during her career, Rice carved out her own niche with her poetic, dreamlike works, often drawing on Irish mythology for inspiration. She mostly worked with a distinctive palette of oils and pastels, but also produced a significant body of collage work, and watercolours.

Noreen Rice suffered a stroke in 2013, and was afterwards diagnosed with cancer. She continued to paint until her death on 23 March 2015. Her funeral was held at Aghabog parish church near Newbliss, Co. Monaghan, on 25 March. She was briefly married to German artist Haïm Kern in the late 1960s in Paris and had a son. She remarried in Ireland in the mid-1970s and had a daughter.

Her work is in the National Self-Portrait Collection, Limerick; Northern Ireland Arts Council; Arts Council of the Republic of Ireland; Ulster Museum, Belfast; and the Tyrone Guthrie Centre, Co. Monaghan.